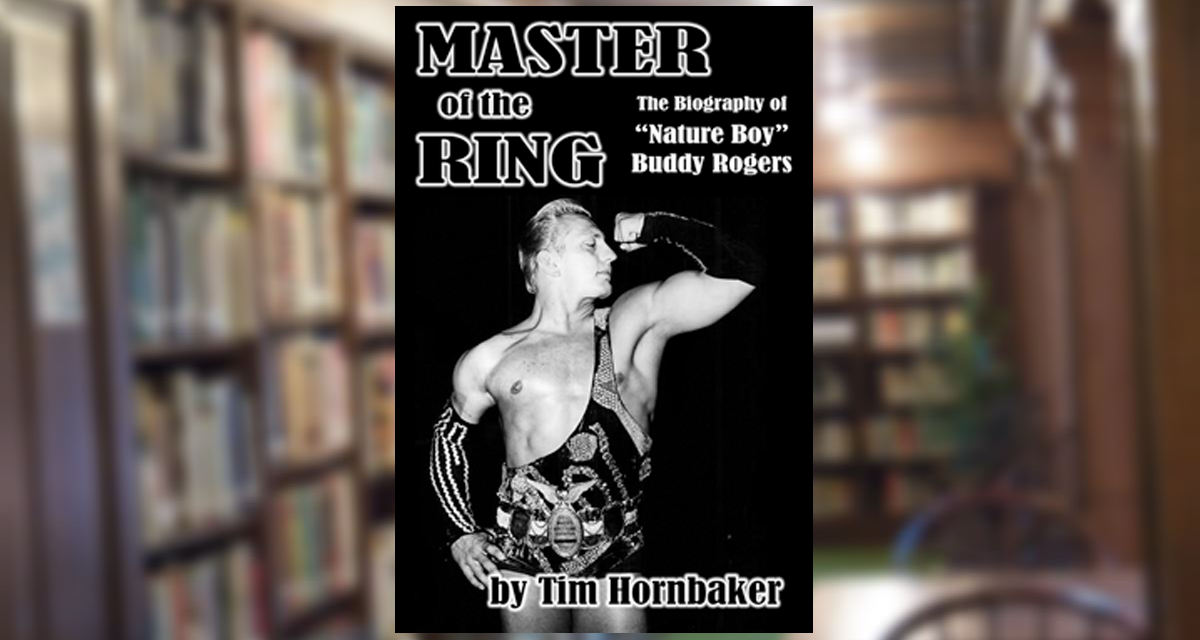 The absence of a full length biography on Buddy Rogers has, for years, been a glaring void in the field of wrestling history.  Although fully acknowledging the perils of drawing sporting parallels, Rogers’ lack of biographical treatment is no less significant than if baseball’s Joe Dimaggio, or hockey’s Maurice Richard, had been denied the quill and ink of a dedicated scribe.  Fortunately, Tim Hornbaker, one of the genre’s most well respected and competent chroniclers, has finally tackled the task with Master of the Ring: The Biography of  “Nature Boy” Buddy Rogers, out now from Crowbar Press. 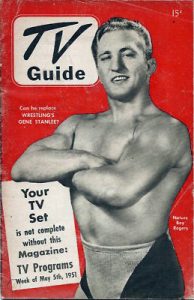 Buddy Rogers on the cover of an issue of TV Guide from 1951. All photos of Rogers contributed by Scott Teal.

Writing a biography on Rogers is no simple feat.  While his box office power and influence on subsequent generations of ring performers is undeniable, the former National Wrestling Alliance (NWA) and the World Wide Wrestling Federation (WWWF, now World Wrestling Entertainment or WWE) world champion was also an enormously polarizing figure who generated as much ire as admiration within the wrestling business.  Rogers has variously been described as arrogant, self serving, and a master of locker room and office manipulation.  Additionally, throughout his career, he propagated a number of stories about his own past that warranted considerable fact checking.  In Master of the Ring, Hornbaker contends with all of these issues, and in doing so presents a highly detailed account of Rogers’ life which explores the complexity of his character, and at least in part, exonerates him from the most excoriating claims of his critics.

Master of the Ring narrates Rogers’ life in a mostly chronological fashion, beginning with his upbringing in Camden, New Jersey, brief military service, and entrance into the regional professional wrestling business as “Dutch” Rohde. The pivotal second act of his career begins when he enlists the managerial services of the eccentric but brilliant Jack Pfefer, who not only helps craft the “Nature Boy” Buddy Rogers persona, but shapes his appreciation for how to navigate the world of professional wrestling to his personal advantage (and, I might add, Pfefer veritably demands at this point a full length biography of his own). Rogers’ continuing rise to fame and fortune following his acrimonious split with Pfefer, culminating in his reign first as NWA world champion, and then WWWF champion, are fully recounted by Hornbaker. So, too, are the behind-the-scenes politics and rivalries that not only impacted Rogers’ career, but due to his importance as an athlete, reshaped the entire professional wrestling landscape to the present-day. The penultimate chapter in his story focuses on the dual setbacks of his notorious locker room encounter with Bill Miller and Karl Gotch, and his declining health, which set the stage for his removal as WWWF champion and the dawn of the Bruno Sammartino era.  Thereafter, Hornbaker details Rogers’ long goodbye to the wrestling business, with the spectre of his heart condition always casting a shadow over his periodic returns to a sport that he, as much as any other athlete, had reshaped over the course of his career.

In the process of securing his preeminent position in the wrestling business, Rogers’ ability to draw both acrimony and adulation among fans made him the sport’s top box office attraction for more than a decade. However, that polarity of viewpoints held by the paying spectators had a parallel within the closed door fraternity of wrestling as well.  Hornbaker recounts tales of the many people that Rogers angered or alienated over his 40 plus years in and around the ring, beginning with the Dusek family in the 1940s, and continuing into the late 1970s when he was a booker for Championship Wrestling in Florida.  Dislike for Rogers, coupled with his shortcomings as a legitimate wrestler, necessitated various wrestlers having to serve as “policemen” (athletes with real wrestling ability who protected another wrestler from potentially uncooperative opponents) long after that role was generally considered to be a relic of the past. 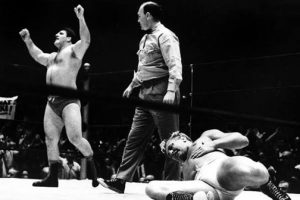 For the most part, the negative elements of Rogers’ personality and business dealings have loomed largest in popular recollections of his life outside the ring. Exhibit A in that regard has long been his infamous quote,“F**k your friends and be nice to your enemies, so your enemies will become your friends, and then you can f**k them too.” In contrast to that damning self indictment, one of the persistent themes in Hornbaker’s biography, is also the presence of a small group of people to whom Rogers remained unfailingly loyal throughout his life, including Montreal promoter Eddie Quinn, wrestling entourage member Billy Darnell, and his youthful manager, Bobby Davis. Similarly noted are the many people that Buddy mentored during his time in the business. Hornbaker is by no means hagiographic in his treatment, but Rogers’ positive attributes are certainly given greater emphasis than has generally been customary to this point in other published accounts of the territory era. 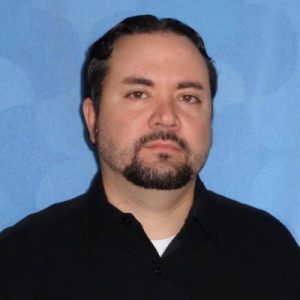 Shifting focus from the dressing room to the squared circle, one of the few criticisms leveled at Rogers’ in ring performances,  is that, much like his Nature Boy heir, Ric Flair, he was a “routine,” performer who more-or-less wrestled the same match against every opponent he faced.  More than any other subject covered in the book, Hornbaker’s narrative attempts to dispel this idea by both detailing how Rogers’ wrestling style and in-ring persona evolved over the course of his career, and how Rogers would use very different methods, even during the same periods of time, depending on his standing in a particular territory as fan favorite or foe.

Leaving the views of his detractors aside, Rogers also spun various yarns over the years that, due to their subtlety, have been passed on uncritically as historical truth. Hornbaker’s archival research on Master of the Ring was nothing short of meticulous, and as a result, readers will have a much firmer grounding on the realities surrounding not only the obviously-apocryphal accounts of the Rio De Janeiro WWWF championship tournament, but also early career encounters with Ed “Strangler” Lewis, his purported exploits wrestling on the carnivals, and the origins of the Nature Boy moniker.

With Master of the Ring, Hornbaker further cements his already-established, and highly deserved, reputation as one of the most diligent researchers who has ever turned their attention to writing books on wrestling history.  In narrating the events of Rogers’ career, Hornbaker examines important themes and controversies from Rogers’ life in and out of the ring, but he also details the outcomes of hundreds, perhaps thousands, of wrestling contests. He similarly delves into subjects like the incredibly complicated (even by pro wrestling standards) Ohio title scene during the 1950s. Doing so certainly grants Rogers a “full” biographical treatment, though the depth of information also makes Rogers bio, in places, a dense read. Readers accustomed to breezing through hyperbolic, Irvin Muchnick-style prose will quickly come to realize that the end product of Hornbaker’s carefully measured writing style is a serious biographical treatment of Rogers, not a tabloid-style exposé.

Above all, Hornbaker’s expertise shines when chronicling the apex of Rogers’ career as world champion. The veteran historian deftly navigates the reader through Rogers’ relationships with the major wrestling power brokers and promotions of the time, most notably Sam Muchnick of the NWA and Vincent K. McMahon of Capitol Wrestling. Unsurprisingly, given his past publications, this is Hornbaker’s wheelhouse in the field of wrestling history, and his insight into the period is equally informative and engaging. 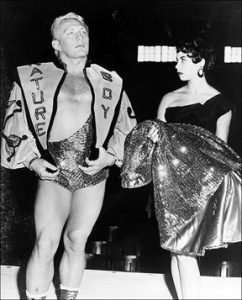 Rogers with a valet.

With Master of the Ring, Hornbaker adroitly fills one of the most significant holes in the field of wrestling literature. Rogers’ most vociferous critics will not have their palates satiated with a lurid condemnation of his personal shortcomings, but all readers will come away with a measured, and in-depth, appreciation of a man who, for all his faults, sought to engage with the often-treacherous world of professional wrestling on his own terms, and left an indelible, and perhaps even unsurpassed, legacy in the sport.