The history of professional wrestling has been changed to suit the needs of the individual or promotion. It isn’t uncommon to have lies become truth when the truth becomes inconvenient. Tim Hornbaker cuts through the political murk and provides a clear history of the early WWE in his book Captiol Revolution: The Rise of the McMahon Wrestling Empire.

From the start of the book Hornbaker takes no sides but calls the history of wrestling and the WWE down the middle like a good referee. In fact, I would liken the tone of his tome to that of a history textbook. Using print sources for a great deal of his research, such as personal correspondence, government documents and thousands of articles, Hornbaker was able to get beyond the kayfabe concocted story of wrestling.

This book covers the sport of wrestling on the East coast and provides a solid look at the major players in the game from the early 1900s to Hulk Hogan’s first WWF title win in 1984. The background stories are necessary to paint the picture of the landscape of the wrestling world that was run by a handful of ruthless barons. 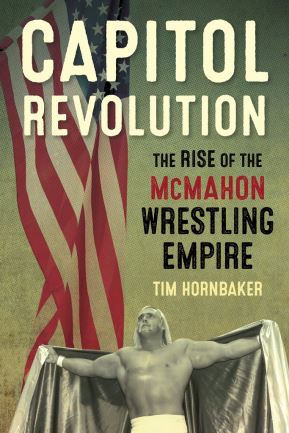 I found the story of the generations of the McMahon family to be riveting. Starting with Roderick and Elizabeth McMahon in 1870 West Harlem, entrepreneurship seemed to start with this energetic couple. Roderick was a liquor distributor who provided for his young family and was able to buy his own house. This spirit was passed on to his children Eddie and Jess as they began promoting sporting events around New York, most notably boxing. From there we learn of the lives and careers of Vincent Sr. and later his son Vince Jr. A common theme that is stated and restated is that the McMahon’s had a code of honour and played by the rules for many generations.

Hornbaker does not take sides and he does not have an ax to grind with anyone named McMahon. It is evident that he just wants to print truth backed up by historical proof. The activities of the sports commissions, backstabbing promoters and deals gone good and bad make this story an entertaining soap opera that might have been better than the in-ring product.

One of the key characters throughout the book is Joseph “Toots” Mondt. Mondt started out as a wrestler, is often pegged as the inventor of the modern wrestling card and is a scoundrel. Hornbaker’s passive voice as an author of history and fact cannot hide the fact that Mondt was the king swindler in a business of bad characters. What was most striking was the way Vince McMahon Sr. treated Mondt. When McMahon finally wrested control of the East Coast wrestling landscape from Mondt and associates he could have decided to leave his rival out in the cold. Instead, McMahon brought Mondt in and gave him purpose. Even when Mondt retired he kept him on the payroll until his death. (Mondt was just a part of the WWE Hall of Fame’s Legends induction at WrestleMania 33.)

Another aspect of this book is the chance to get a different take on the wrestling greats of many eras. Reading the stories of Ed Lewis, Jim Londos, Antonino Rocca and Buddy Rogers was refreshing and a new angle was taken on them. I personally found the rise of Bruno Sammartino to be fascinating. The multiple time WWWF champion was not just important, but vital to the promotion’s success.

If you are a fan of the history of professional wrestling then I highly recommend picking up Captiol Revolution, which came out in March 2015. Tim Hornbaker has written the history of the McMahon empire that is entertaining, well balanced and factual. I consider this the best wrestling history book ever written.