Bulldog Bob Brown lives on as a beer

The notorious villain Bulldog Bob Brown died in February 1997, but was recently resurrected as a beer by a fan/brewer in eastern Ontario.

Stalwart Brewing has launched “Bulldog Bob Brown,” an oatmeal brown ale, with a 6.4% alcohol content. It is described as such on the company’s website: “A whack of oats gives this beer a creamy texture while a touch of chocolate malt offers a hint of mocha.”

Nathan Corey is one of the brewers behind Stock Pot Ales, which was essentially three co-workers in a restaurant kitchen using over-sized home brew equipment. Corey, with Adam Newlands and Edwin McKinley, founded Stalwart Brewing, based in a former car garage and body shop in Carleton Place, Ontario (about 45 km from Ottawa). The brewery is in its third year. 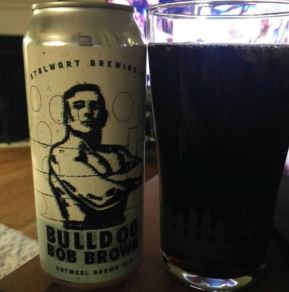 Corey is the reason there’s Bulldog Bob Brown beer. He grew up in New Brunswick and was a huge fan of Atlantic Grand Prix Wrestling (AGPW), which was one of the regular haunts for Bulldog, especially in the summer months for the yearly tours.

“My partners are slightly younger than I am and are strictly WWE guys, but I’ve made efforts to show them the charms of the lower circuit by constantly showing videos at the brewery,” explained Corey via email. “Bulldog Bob wasn’t necessarily my favorite (that would have been Leo Burke), but we were making a brown ale and the name fit best (for obvious reasons). So the name, while an homage to Bulldog Bob, was actually inspired by AGPW as a whole.”

At the moment, Bulldog Bob Brown is only available at the brewery in cans, and at a few restaurants and bars in the capital region.

The first of the company’s beers to be accepted into Ontario’s provincial liquor stores was Dr. Feelgood IPA, but it pulled after one day, in January, over concern about the label looking too much like medicine.

That won’t be the case with Bulldog Bob Brown, as the label looks far more svelte and in shape than Bulldog himself ever did (and it doesn’t really look like him either).

“We thought it was such an obscure reference that maybe a couple of buddies of a certain vintage back in [New Brunswick] would hopefully catch it,” said Corey. “We were frankly surprised that anyone else would! We were just looking for a ‘stalwart-type character’ with the name Brown, and an old school wrestler from a small circuit just fit the bill perfectly.”

Greg Oliver likes beer, and is struggling to remember any other beer named after a wrestler. Is he missing one? Email Greg at [email protected], and you can follow him on Twitter @gregmep.