There’s a good reason why pro wrestling lags behind other professional sports and entertainment juggernauts in terms of encyclopedic write-ups; why there are, for example, more than a few “Hockey History” books and reference manuals listing Hollywood’s stars through the years, but a “who’s who” history of pro wrestling is hard to come by. 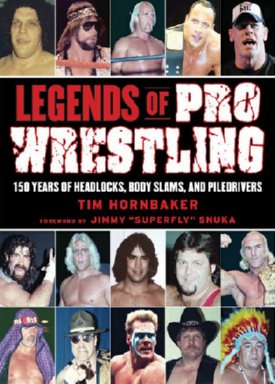 The reason is that wrestling history is about as subjective as it comes. True, all history is shaped by the historian as much as it is by the facts, but wrestling’s minutia are especially suspect: real names, age, height, weight, and birthplaces are obscured by performers and promoters, and that’s without taking into account the multiple characters played by the same person. The business of pro wrestling is arguably founded upon deceit, after all.

Author Tim Hornbaker has resolved to undertake the challenge of sifting through fact, fiction, hyperbole and myth to create Legends of Pro Wrestling: 150 Years of Headlocks, Body Slams, and Piledrivers, a 576-page book chronicling the individuals that have stepped between the ropes from, starting as far back as 1859 at which time wrestler named Colonel James McLaughlin debuted. Debuting in 1861, the second oldest entry’s name was, naturally, McMahon. It was John, though, with no relation to the current czar of pro wrestling, Vince, Jr.

Hornbaker has been researching wrestling for 15 years, having penned National Wrestling Alliance: The Untold Story of the Monopoly that Strangled Pro Wrestling, a book that received high praise for its exhaustive research, before taking on this equally daunting effort.

There are three points that give this book its strength, and the sheer span of years (eras, fact) that Hornbaker covers is the first such element. From those mid-1800s to Bobby Roode’s TNA championship and just before The Rock’s return to Wrestlemania against John Cena, there’s very little chance for complaint about who’s missing rather than who’s included.

There’s very little chance, that is, although someone is going to go poring through this book to find that one unforgivable exclusion and hang their hat upon it. There may also be a tendency amongst those who have become accustomed to an internet-based immediacy in publishing to bemoan the most recent developments occurring in 2012 — but this book is as current as it could be.

The book is divided up into four sections: Firstly, “The Pioneers Blaze a Trail” which details the years between 1850 and 1920; secondly, “Gimmicks and Ingenuity Rekindle Wrestling’s Popularity,” chronicling 1921 to 1950; thirdly, “Heroes and Villains Wage War in the Sacred Territories” for the years between 1951 and 1975; and lastly, “New Legends are Born: From Hulking Up to the G.T.S.,” covering 1976 to December 31, 2011. Within each section, wrestlers are alphabetized by a combination of in-ring names and real names, which is one of those aforementioned difficulties in organizing an informative database such as this.

It’s really not a problem, though, if you can’t find George Wagner by his last name and instead must leaf through to locate Gorgeous George, while Chyna is catalogued under Joanie Laurer; there is no right way to categorize performers and their stage names. Plus, one more thing for people to complain about if they’re looking for something to do: Bryan Danielson is listed under Daniel Bryan.

Which leads, ironically, to the second big plus about this book: since it’s not about the federations but is wholeheartedly about the wrestlers themselves, Hornbaker owes nothing to any particular promotion in terms of spin or historical importance. This is not a numerical list in which wrestlers are ranked, and Hornbaker stays away from any labels of “best” or most highly regarded when writing his descriptions. Credit is certainly given when due, and obviously inclusion in the book is already a nod to a wrestler’s elevated status above those not found within the pages, but this is ultimately a very stripped-down, unbiased, and non-promotional look at the major players of the past two centuries.

This includes, for the record, Chris Benoit. It may be a while until his mere inclusion in a list dubbed “Legends” is not worthy of mentioning, and it is still significant at this time. The WWE broke its own silence by including him in their Encyclopedia published by Dorling-Kindersley in 2008, but Hornbaker takes the step that the WWE is still not willing to take itself by holding his accomplishments up against his atrocities in the same breath. Again, this is done in an objective style, offering no commentary and simply giving the reader the task (and ultimately the respect) to decide how they feel about Benoit’s, or anybody else’s, recognition.

The comparison to WWE’s Encyclopedia certainly brings about the flat visual aspects of Legends of Pro Wrestling. On the hand, getting into a battle of visual showmanship with the WWE is stepping into an unfair fight (does anyone produce slicker commercials and visual lay-outs than the WWE?); still, Hornbaker’s book doesn’t really try to splash things up at all. The pictures themselves are well-chosen and effective on the whole (including a good number from SLAM! Wrestling’s Mike Mastrandrea), but make no mistake about this book being an informative resource and not an eye-grabber.

The third very effective structural factor that makes this book click is that it refuses to compare apples to oranges. Wrestlers are grouped by eras, not by style or by championships won. Hornbaker even stresses that “win/loss records are not indicative of a wrestler’s genuine success based on their legitimate abilities.” Wrestling is a business where it matters not what you bring to the table, so long as you bring something. So it is that Kurt Angle, The Fabulous Moolah, Haystacks Calhoun, and Little Beaver can find themselves in the same list with no delineation between them and no comparison required.

Hornbaker smartly recognizes each wrestler for their own qualities in the form of unique tidbits for each entry. Almost everyone has a finisher listed, but not all; some have been honoured by a Hall of Fame and are thereby recognized; and some, much to the appreciation of this reviewer, have their film and television appearances tallied if notable. Each wrestler is also tied to their best opponents by way of a short list of two or three top adversaries, which is another unique attribute of a successful pro wrestler — it really can’t be done alone as it takes partnerships in the ring to create success.

Once you make your way past an unfortunately forgettable foreword by Jimmy Snuka, you dive headlong into Hornbaker’s palpable respect and dedication towards the history of professional wrestling. Perhaps with a resource such as this available, it will be easier for future volumes follow suit and continue to clarify the genealogy of this business so accustomed to hiding the truth. The workers within the pages of Legends of Pro Wrestling, and many more, deserve to have their story told.