Mat Matters: Is the Undertaker’s WrestleMania winning streak less impressive than it could have been?

Undertaker’s return last Monday at the 1,000th episode of Raw got me thinking — there is no doubt that in all the annals of professional wrestling the Undertaker’s WrestleMania winning streak of 20-0 is one of the most impressive. Yet, looking at the opponents over the years it does raise some questions about why it doesn’t include more of the top WWE main event stars. That’s a shame.

During the first five years of his winning streak, the Undertaker faced Jimmy Snuka, Jake Roberts, Gonzalez, King Kong Bundy, and Diesel. It is understandable that for WrestleMania VII, the Undertaker didn’t have a match with top talent such as Randy Savage, Ultimate Warrior, Sgt Slaughter and Hulk Hogan due to the fact that he was a relative newcomer to the company. However, after WrestleMania VII he won his first WWE championship against Hulk Hogan at the 1991 Survivor Series. A win over Hulk Hogan during that era was very rare and a clear indication that the Undertaker was now being thought as a main event star. So after the 1991 Survivor Series there was a logical expectation amongst many that the Undertaker would face, Hulk Hogan, Randy Savage, Ric Flair (who won the WWE championship at the 1992 Royal Rumble) or even Sid Justice at WrestleMania VIII. Instead, the Undertaker went on to face Jake Roberts, which while one of the best matches on the card, seemed a step down from facing one the aforementioned WWE superstars. 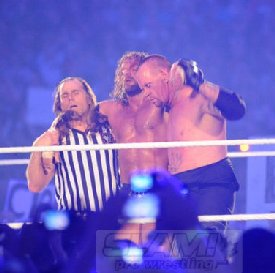 Shawn Michaels and The Undertaker help Triple H out of the ring after ‘Taker beat him at WrestleMania 28. Photo by Mike Mastrandrea

However, in the eyes of many it is the matches the Undertaker has had against Shawn Michaels at WrestleMania 25 and 26, and against Triple H at WrestleMania 27 and 28, which elevated the winning streak to the current legendary status it resides at.

Is the Undertaker’s WrestleMania winning streak less impressive by the fact that it doesn’t include any matches against Hulk Hogan, Randy Savage, Bret Hart, The Rock, Steve Austin, Mankind, Chris Jericho, Brock Lesner, Bill Goldberg, Eddie Guerrero, Chris Benoit, and Kurt Angle? Yes. Out of that list Hulk Hogan, Bret Hart, The Rock, and Steve Austin, defined the eras they wrestled in. The fact the Undertaker never wrestled any of those four top stars at WrestleMania is strange and leads to a great deal of speculation as to why it never happened.

There is also one major WWE main event star whom hasn’t been mentioned yet, which is John Cena. During the years of Cena’s ascendancy in the WWE, the Undertaker faced several other top stars, so for that period of his career, one can’t really say the winning streak suffered. Yet, John Cena is the wrestler who has clearly defined this post Attitude Era more than any other, and if the Undertaker doesn’t have a match with him at WrestleMania it would further lessen the greatness of the winning streak. A match between the Undertaker and John Cena would come with a lot of intrigue due to the fact that many fans feel John Cena has been aggressively pushed to the top of the card. There would be a general belief that WWE management would do the unthinkable and have Cena be the one to end the WrestleMania winning streak.