Black Jack Daniels, who died Thursday of dementia at 83, was one of the quintessential homesteaders that made up the wrestling business. He had the talent and skills perhaps to do more, but instead chose to stay near his Minneapolis home and wrestle primarily for the AWA.

His greatest successes came alongside his brother-in-law, “The Big K” Stan “Krusher” Kowalski, who was married to Jack’s sister, Cleo. 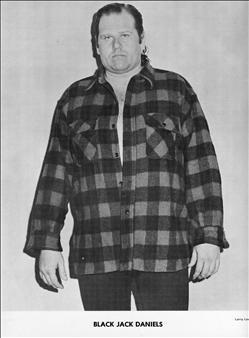 “I was with Black Jack Daniels down in Texas. I was roaming around the area. Jack and I, we took the Texas titles, the Florida titles, we took the title, I don’t remember what they call it, out of Atlanta,” recalled Kowalski a while back. “We did pretty good as a team, but Jack didn’t really want to leave Minneapolis, so he stayed here.”

Like Kowalski, Daniels also teamed with Al “Tiny” Mills for a time, working as Jack Mills in the Central States territory.

Jack Danielson was born and raised in northeast Minneapolis. After serving in the U.S. Navy for five years, he returned to his home town, and found work as a bouncer.

The 6-foot-1 280-pound Danielson started wrestling around 1950, and retired in 1972, at which point he was a valued carpenter, able to make others look good and move them up the ladder.

Wrestling Monthly in January 1972 praised Jack Daniels in an article, “Preliminary Stars of the AWA, The Backbone of the Sport:”

Jack “The Ripper” Daniels is the protege of Tiny Mills and The Big K, Stan Kowalski, who at one time were world tag team champions. Jack not only resembles his teachers physically, (stocky build, long hair, black tights and leotard ring gear) but also has a similar wrestling style.

In the early 60’s Jack teamed with Tiny Mills for a wild campaign that still has the fans talking in the Missouri-Kansas area. A series of matches with the Medics for the Central States tag team championship drew quite a few huge crowds.

Jack hit his all-time prime teaming with his other teacher, Big K, in Florida in 1967. Pulling an upset the two long-haired mat villains defeated the team of Johnny Weaver and Jim Becker to win the Southern tag team championship. Among other teams the faced while holding the title were Haystacks Calhoun and Eddie Graham, Jose Lothario and Wahoo McDaniel and Harry Smith and Alex Medina.

At the present Jack “The Ripper” Daniels has been campaigning in the Midwest and hold victories over such men as Jim Vallen and Kenny Jay.

After his retirement worked as a truck driver and equipment operator for a nursery. While wrestling, he owned a nightclub with Kowalski for a time.