Guest column: Goldie Rogers – One in a million, Jack! 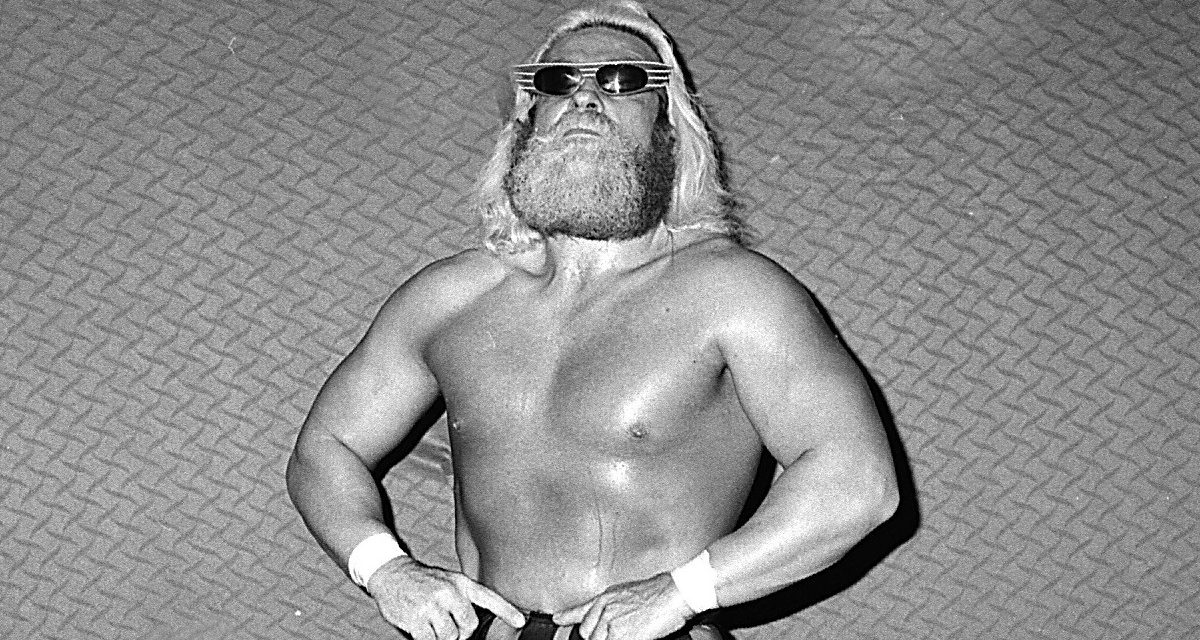 Goldie Rogers always said that professional wrestlers are one in a million. He explained that they had to be in order to travel, be away from home, and deal with the toll that the road and the ring took on them. Since he was a respected member of the wrestling community, I was certain that Goldie knew what he was talking about.

Goldie was one of the wrestlers that I interviewed and photographed for The Kentville Advertiser, a newspaper in the Annapolis Valley in Nova Scotia. In total, I did four interviews with Goldie, one photo session and covered all of his matches during the summers of 1991 and 1992. 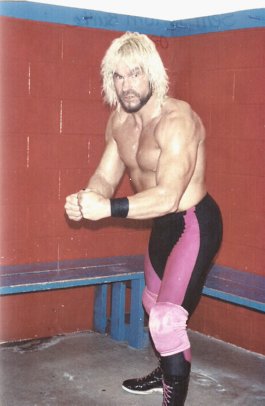 Goldie Rogers strikes a pose in the dressing room in 1991 in Berwick, Nova Scotia. Photos by Mary Bond.

The first time I met Goldie was at the Kentville arena in May 1991. It was the second week of the new Maritime Championship Wrestling tour. I had arranged with promoter Paul Peller to interview Goldie. Growing up, I had seen Goldie wrestle for Emile Dupre’s Atlantic Grand Prix Wrestling and also for a second promotion that had done one show in the area. Who could forget that strut to the ring, sparkly pink jacket, big sun glasses, the jacket on and off again, how he tormented the crowd when they reacted to this? Remember how he would repeat this for three to five minutes before the start of the match. There was always that element of glamour, pageantry and sometimes, a little trickery. Wait. Make that always a little trickery. You could bet on that, Jack!

Regardless, I was thrilled when I heard that Goldie was coming back to the Maritimes. I think Goldie was driving with Eddie Watts and Moondog Sailor White back then. They hadn’t arrived at the arena yet. I waited patiently outside the dressing room area. As soon as they arrived, I approached Goldie about the interview. He put his bag in the dressing room and we went to a small room in the back. “You sit there,” he said as he pointed to the bench by the wall and “I’ll stand here”. He was referring to a small table that was in front of the bench. The stern gruff voice startled me a bit as I wondered what I had gotten myself into.

We were partway through the interview when a knock came at the door. It was Moondog Sailor White letting Goldie know that he was in the first match and that they were waiting for him. I immediately apologized and got up to leave as quickly as possible but not before thanking Goldie. He told me to come back during intermission and we could finish the interview. I wasn’t going to hold him to that because I thought I may have imposed enough. But during intermission, I looked up to see Goldie standing by the bleachers at the entrance to the dressing room. When he saw me look his way, he nodded for me to come over. We finished the interview and as I was leaving, he said, in that gruff Goldie voice, “Just don’t tell anyone that I’m a nice guy!”

“Your secret is safe with me,” I replied. If you ever come across the newspaper article that ran the following week, take notice of the way it ends. I finished by writing something along the lines of Goldie Rogers is set to step in the ring again tomorrow night, where he will prove once again that he is anything but a nice guy. Sorry, Goldie but I kept your secret long enough. You really were a nice guy.

Goldie was one of the first wrestlers to take me aside and tell me I should consider writing full-time. I had been writing articles on wrestling and submitting them to the newspaper in my spare time. During the summer, several of the other wrestlers suggested it too. Their support encouraged me to return to university and get my journalism degree. I did work in media as a reporter/photographer for awhile and have many fond memories of my media days but nothing compared to the time I spent covering professional wrestling. Imagine being a fan of something your entire childhood and then getting the chance to write about it. I wanted to do as many interviews, articles and take as many pictures as possible.

So, I was really excited when the promoter asked me to take photographs of Goldie for the event poster. We were in one of the spare dressing rooms at the Berwick arena. I was nervous and wanted to do a decent job. I told Goldie something that made him laugh. I took a photo while he was laughing and I said, “You’re not supposed to smile,” I reminded him, “You’re supposed to be mean, remember?” Jokingly, I added that I just saw his favourite fan outside the dressing room talking to Todd MacPhee, his opponent that night. His face changed to an angry snarl but, as I snapped the pictures, I heard him hiss, “No, she’s not. She’s in here taking pictures of me.” Then, I started to laugh. Somehow we did manage to get a few shots from that session.

Not every experience started out as a favourable one. In fact, my favourite memory is actually one of my most embarrassing moments. One night, Goldie entered the ring in his usual fashion but this time when the security guard went to take his ring jacket, he refused to give it to him. This is interesting; I thought to myself, what is he up to?

Next thing I knew, Goldie was pointing at me. He was informing everyone that I was going to take his ring jacket. No way, I thought this is not happening. I could see some of the fans looking at me and then, back at Goldie. I shook my head no, tried to pretend I didn’t know what he wanted but he persisted. Still, I stayed in my seat. I can be pretty stubborn but here’s the thing, Goldie Rogers could be stubborn too. He insisted that he wasn’t going to wrestle unless I took his jacket. I could hear a couple of fans yelling that I didn’t have to take his jacket and to leave me alone… finally, after what felt like forever, though I’m sure it was only minutes, seconds even, I went to the ring and took his jacket back to the dressing room. I was NOT happy. I remember the look he gave me when I approached the ring. I do think for a split second, he thought I wasn’t going to take his jacket. I never found out why Goldie did that though, I suspect it could have been a dare from the back or a joke played on me but nevertheless, it is my all-time favourite Goldie memory. I can laugh about it now but back then…. not so much.

Goldie had a lot of great matches here in the Maritimes. Though this isn’t supposed to be a factual account of Goldie’s matches or career highlights, there is one match in particular that stands out in my mind.

Towards the end of the 1991 summer tour, fans got to see a different side of Goldie. The battle lines had been drawn a few weeks before when Rogers turned on the American wrestlers — MCW had an American versus Canadians feud/storyline then — and he became a reluctant fan favourite. 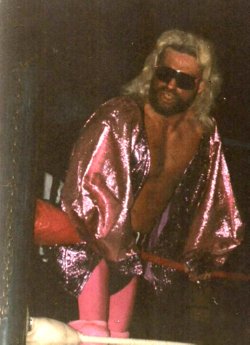 Goldie Rogers works over the crowd.

This led to an intense feud with Bad Boy Eddie Watts and eventually, an anything goes match to settle things once and for all. Well, I can tell you, that match was not like any other match we’d ever seen in Berwick. You knew from the get-go they meant business. But no one expected the match to spill out into the concession stand area and yes, there was an incident with mustard, as I recall. If that wasn’t enough, they stormed out through the emergency exit and into the parking lot with the entire arena of fans, except for me and one or two others, with them.

You can imagine the look on Ron Starr’s face when he peeked out from the dressing room to see an empty arena. “Where did everyone go?” he asked. When I told him, he shook his head. “They’re going to kill each other before this is done.”

But the chaos wasn’t anywhere near over at the end of the match. Later, we saw a police officer talking to Eddie. Apparently, a lady living next to the arena heard the commotion, looked out her window to see Goldie running for his life with Eddie at the chase and a mob of angry fans behind them. You may want to stop for a minute and picture what that looked like to this lady. I’m sure Eddie could tell it better but I remember that this lady called 911; the police arrived at the arena and wanted to charge them for starting a riot. I’m sure you’ve guessed that didn’t go over too well with Eddie or Goldie. It all ended well except for the mark of a couple of mustard stains.

The last time I saw Goldie was in the fall of 1992. Saying goodbye is never easy at the end of a wrestling tour. There are no guarantees in wrestling just like in life that you’ll see the same people again. You always hope that you do and sometimes plan to but there are never any guarantees. It was harder to say goodbye at the end of the second summer. Goldie walked over to me and we exchanged the usual goodbye hug. “I’ll see you next summer,” I said cheerfully, though I was feeling anything but cheerful. “In case you don’t,” he said, he leaned in and kissed me on the cheek. It was not like Goldie to do that. He said a few words of encouragement, wished me luck at journalism school. Then he said something funny. We both laughed and he left. Except for a telephone call the following year, I had no contact with him through the years.

Goldie was a really private person. I didn’t know much about his “real” life and I respected his choice not to share that information with me during interviews. He did, however, share with me his thoughts about wrestling and I will always appreciate that he trusted me enough to do that. I know that he made a difference in professional wrestling. I know he will never be forgotten, especially by me or any of the wrestlers who toured with him. And I do believe that wrestlers are one in a million because Goldie Rogers proved it to be true.

Mary Bond, who lives in Dartmouth, Nova Scotia, would like to extend her sincerest condolences to Goldie’s family and the wrestlers who knew him, especially the ones who toured with Goldie during the summers of 1991 and 1992. Also, thank you to Greg Oliver for asking me to do this. And, of course, thank you to Goldie, R.I.P. Jack!