Rita Cortez, dead at 73, was a force in wrestling, country music

Rita Cortez, the woman wrestler who died Friday at the age of 73, perhaps contributed more to the country music industry than she did wrestling. Yet in wrestling, her affair with Buddy Lee, the husband of “The Fabulous Moolah” Lillian Ellison, set off a chain of events that resulted in Moolah’s dominance of women’s wrestling for two decades. 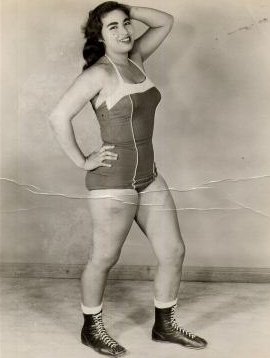 Working alongside Lee, Cortez helped establish Buddy Lee Attractions, Inc., in 1964, which is today Nashville’s oldest and largest privately owned talent agency. Some of the biggest names in country music have been represented by Buddy Lee Attractions, including George Strait, Willie Nelson, Garth Brooks and the Dixie Chicks. An original partner was Audrey Williams, widow of Hank Williams, Sr., with a teenage Hank Williams, Jr., as the company’s main client, and it was called Aud-Lee Attractions until 1968.

Yolanda Gutierrez was the daughter of Ignacio Chavez and Julia Gomez Gutierrez. As Rita Cortez, she got into pro wrestling in the late 1950s.

“Rita Cortez’ career didn’t get into high gear until near the end of the golden age of women’s professional wrestling, otherwise her exciting ring personality might have had an even greater impact on the profession,” reads a Cauliflower Alley Club program from 2001, when she was honoured. “Even as it was, this one time protégé of the Fabulous Moolah prompted plenty of excitement with her dark come hither good looks and sparkling personality. By the mid 1960s Rita Cortez was a name prominent enough to rank with Moolah, June Byers and Penny Banner as the premier headliners of the game. And she, of course, is still remembered by many as the luchadoress of Mexican wrestling history.”

A September 1962 profile in Wrestling World magazine says that the “Mexican Spitfire” with her “flaming black eyes” sought out Buddy Lee in South Carolina for training. In Moolah’s book, she said that Cortez came by with her mother, and that Rita was just 18 years old.

Lee and Ellison were the power couple in women’s pro wrestling at the time, with Moolah the veteran on the road, and Lee lining up the bookings and training wrestlers.

“Rita was a dark-skinned Mexican girl, and I just loved her to death,” wrote Ellison in her autobiography, The Fabulous Moolah: First Goddess of the Squared Circle. “I thought of her as a little angel. Like a lot of the girls, she had idolized me and kind of wanted to be me. She was always trying to help me around the house, and I took her under my wing like she was a daughter or sister.” 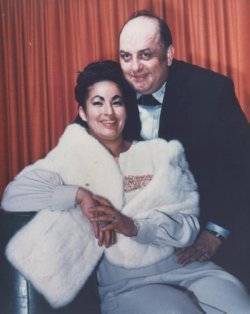 According to Moolah, Cortez took it a step further, and started copying her not just in the ring, with her actions and mannerisms, but outside it as well — having an affair with Buddy Lee. Moolah made an unexpected trip home and caught them.

“Well, there was no more doubt when I walked in my house that day,” she wrote. “Let’s just say that what I saw left little to the imagination. I just stood there, looking at this scene, my blood boiling.” Moolah kicked Cortez out and divorced Lee. Cortez and Lee married in 1967.

Cortez did continue to wrestle for a while, though bookings were harder to come by when Moolah took control of the business, so she moved into helping Buddy Lee Attractions.

One of Cortez’s noted moves was the “Mexican Bounce Hold,” which Wrestling World described as “a body slam; but she uses it with such extra force that it causes the human body to bounce in the air as it if were attached to a spring. In some of her matches she has bounced her opponents right through the ropes and out of the ring.”

During her career, Cortez battled all the big names in women’s wrestling, such as Judy Grable, Fabulous Moolah, Dotty Carter, Peggy Allen, Fran Gravette and Olga Martinez, switching from heel to babyface, often based on where she was working or against whom.

On March 21, 1964, Cortez was involved in the first women’s match in Michigan in 25 years, against Olga Martinez, in Detroit’s at Olympia Stadium. There had been an informal ban on women’s wrestling, not a law outlawing it, like in other states.

Buddy Lee (born Joseph Arthur Pinhal) died in 1998 after suffering from cancer for several years. He and Cortez-Lee had four children together, Joey, Donna, Gina and Tony. When Buddy’s brother and sister-in-law passed away, the couple took in their three children as well.

The family’s company, Buddy Lee Attractions, not only represented talent, but was known for booking acts at hundreds of fairs every year, and helping to organize events such as Farm Aid. At the annual Christmas and Fourth of July parties, the family would all chip in to help feed the hundreds of people in attendance. 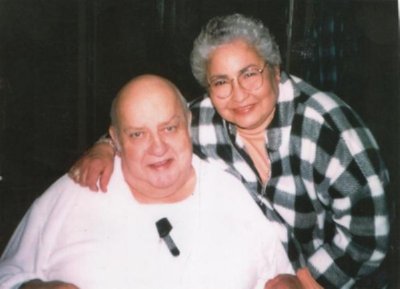 There is a MySpace page for Buddy and Rita Lee that quotes Rita about their lives together, last updated in June 2010.

Rita was supportive of the business, often filling in for her husband at functions around Nashville while he was on the road with talent. 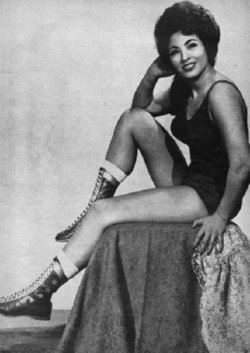 “Artists, musicians and songwriters were always coming and going all hours of the day and night,” she said. On the website, she talks about cooking for Sammy Davis Jr. one night around 2 a.m. “Sammy looked at me and said, ‘You’ve done something nice for me, now I wanna do something nice for you. Why don’t you come to my recording session tomorrow?’ It was a closed session so I took my son Tony and we had a ball!”

As Cortez-Lee, she also appeared in the 2004 documentary by director Ruth Leitman, Lipstick & Dynamite, Piss & Vinegar: The First Ladies of Wrestling.

Cortez-Lee died on Friday, July 27 in Hermitage, Tennessee. There will a Mass of the Resurrection at 10 a.m. On Thursday, August 2, 2012 at The Cathedral of the Incarnation, 2015 West End Avenue, Nashville, and a private burial will follow. Bond Memorial Chapel, N. Mt. Juliet Road and Weston Drive, Mt. Juliet, Tenn., will host the visitation, 4-8 p.m. on Tuesday and 2-8 p.m. on Wednesday. Flowers accepted or memorials may be made to St. Edward School Tuition Assistance Fund, 188 Thompson Lane, Nashville, TN 37204.