NWA book not for the casual fan

If one could earn a college degree in professional wrestling history, no doubt Tim Hornbaker’s National Wrestling Alliance: The Untold Story of the Monopoly that Strangled Pro Wrestling would be the last book you read before receiving your degree.

It is a book written for those with a strong knowledge and understanding of the history of wrestling. One must go into the book prepared as it is filled with endless names, many of whom are given little to no explanation. Some are easy like Jim Helwig (who became the Ultimate Warrior), but others like Paul Jones are shortly explained. With those of little knowledge might wonder why a manager from the 1980s was promoting 30 years before, when in fact, they are two different men. 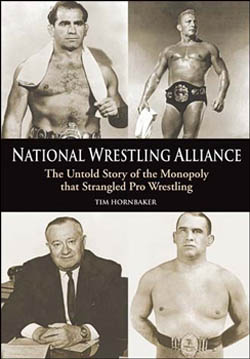 Besides the brief or little explanation of minor names, also missing is an index which would be very beneficial for a book of this kind. Often you want to go back and re-read a section, but without an index, it leaves you turning pages endlessly.

The book, published by ECW Press, is strong in explaining major players during the early days of the National Wrestling Alliance (NWA) including Paul “Pinky” George, Joseph “Toots” Mondt and Fred Kohler. Each man’s life and contribution to the NWA is explained in detail leading up to a chapter describing U.S. Government’s investigation of NWA’s possible anti-trust and monopolization in wrestling during the 1950s.

Hornabaker provides Congressional and FBI documents to tell his story. Hornbaker researched the book for 10 years, and it shows to the point it becomes too factual and lacks structure or substance at times.

In comparison to Weldon T. Johnson and Jim Wilson’s CHOKEHOLD: Pro Wrestling’s Real Mayhem Outside the Ring, which also provides a strong history of the early NWA, Hornabaker is far more detailed and resides mostly in the formation of the NWA following World War II and the decade to follow. Chokehold is mostly based around the NWA but also reaches out about WWE’s national expansion in the 1980s and sexual and steroid scandals that would follow.

An interesting chapter, although short in comparison to the big a whole, is explaining the formation of Capitol Sports and what would be called the WWWF. A struggle between what the NWA wanted and what Northeast promoter Vince McMahon Sr. wanted, led to a break. But the book goes into more detail than that, including Buddy Rogers, Lou Thesz and Bruno Sammartino’s role in the split.

The book ends with a rundown of each NWA World champion through 2005, but do not expect to see much detail about the NWA-WCW split in the 1990s, or Jim Crockett Jr.’s control of the NWA World title in the 1980s.

This all sadly limits the amount of casual fans Hornbaker is marketing to. The book concentrates more on those who ran the NWA and not who wrestled for it. It provides a great behind-the-scenes history with Hornbaker researching minutes taken at the annual NWA convention.

The book brought too much to the table. And although would be a great set-up for a sequel, the market is most likely not craving it. By eliminating a lot of the unnecessary history behind the formation of the NWA, space would be left to talk about the demise.

A good test is this — If you know all of these names, you will like the book: Lou Thesz, Pinkie George, Sonny Myers, Orville Brown.