Napoleon met his end at Waterloo. But for an elite group of wrestling’s finest, Waterloo is just the beginning.

That’s because the George Tragos/Lou Thesz Professional Wrestling Hall of Fame is preparing to host the first induction ceremony at its new home in Waterloo, Iowa. 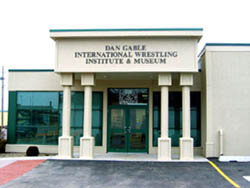 The hall is affiliated with the Dan Gable International Wrestling Institute and Museum, which relocated about 100 miles north from Newton to Waterloo last winter. The ninth annual inductions are expected to draw a big crowd in a bigger location during July 14 ceremonies.

“As far as the new facility goes, this will be our first time and we’re very excited,” said Kyle Klingman, associate director of the museum, which maintains the history of all aspects of wrestling from ancient Greece to today’s Olympics. “As far as media attention, we’ve probably gotten as much as we’ve ever had.”

In fact, wrestling aficionados visiting Waterloo for the first time are likely to find the new locale to be significantly more convenient. The museum is centrally located near an arena that will feature live matches, the induction banquet hall, and the host Ramada Inn of Waterloo, Klingman said.

“Everything’s been smooth. What’s going to be great about this is everything is within walking distance, and that’s something we didn’t have in Newton,” he said. “That’s been a big plus for us — the areas and the facilities we’ve been able to draw on have been great.”

Joining the roster of legends this year are Red Bastien, Steve “Dr. Death” Williams, Curt Hennig, Dale Lewis, and The Great Gama. Initially, Calgary promoter Stu Hart, patriarch of one of the sport’s most famous families, was slated for induction.

But Mike Chapman, executive director of the museum, said that will be deferred because son Bret Hart and other family members are unable to attend due to prior commitments. Stu Hart’s induction is likely to occur in 2008.

“We always want to make a strong effort to get family members to the event and so we certainly will adopt Bret’s suggestion,” said Bill Murdock, a member of the selection committee. “The Great Gama is one of the greatest wrestlers of all time and deserves to go in any time.”

The Tragos/Thesz wing of the hall has traditionally placed a strong emphasis on amateur credentials along with pro accomplishments, and this year’s honorees are no exception:

Also, Ted DiBiase will receive the Frank Gotch Award, given annually to a person who has brought prestige and recognition to professional wrestling.

Museum officials noted that DiBiase has had a huge impact on professional wrestling inside and outside of the ring with his Christian ministry. He is the son of Mike DiBiase, a 2006 Hall of Fame inductee, and woman wrestler Helen Hilde.

Bill Murdock, a driving force behind the establishment of the museum, will receive the Lou Thesz World Heavyweight Championship Award, a charitable award, in recognition of meritorious public service.

Murdock, director of Eblen Charities, was chosen for his outstanding work in serving the needy in western North Carolina. He was the co-founder of the organization in 1991 and has spearheaded its growth from a $400 yardsale to a multi-million dollar group. Thesz was involved the Eblen Charities, as well.

The second presenting of the James C. Melby Award for contributions to wrestling history and research will be done by his daughter, Shelley, following the passing of Melby in February.

The main fund-raiser for the museum, a celebrity golf tournament, will be held July 13 at Gates Park Golf Course in Waterloo. Among the competitors will be Baron von Raschke, Nikita Koloff, Danny Hodge, Tom Drake, Williams, as well as former football star Don Perkins and ex-boxer Ron Stander.

“It’s a large key to our success,” Chapman said. “We sure hope the local golfers and the community as a whole will step up and get involved. The public is invited and the celebrities all have a great time and like to sign autographs and chat with the fans.”

New this year is the addition of a live wrestling show June 13, where legends will get to see some future standard-bearers in action. Presented by former world champion Harley Race’s World League Wrestling promotion, five matches will include Joe Hennig, who is making his pro debut, and Ted DiBiase Jr., a pair of third-generation wrestlers.

Joe Hennig’s appearance will make it a true family affair, since his late father is scheduled for induction, and grandfather was cited for his career in 2006. “Larry Hennig is bringing a busload of people down from Minnesota. He and his family are unbelievable. They’ve been great for the museum,” Klingman said.

The main event will sport WWE star Trevor Murdoch, the WLW champ, against Dangerous Derek. Part of the proceeds from this event will go to benefit the Gable museum, and several stars will be signing autographs when the doors to the Young Arena open at 6 p.m.