WATERLOO, IA — The subject was wrestling, but the watchword was definitely “emotion” as the Class of 2007 entered the George Tragos/Lou Thesz Pro Wrestling Hall of Fame in ceremonies held Saturday.

As 40 members of the Hennig family joined dozens of fans in choking back tears, Curt “Mr. Perfect” Hennig joined the roll call of greats in the hall during its ninth annual induction.

The blond, curly-locked star, who died four years ago at 44, joined his father Larry, inducted last year, as the only father-son tandem in the hall, which is part of the Dan Gable International Wrestling Institute and Museum.

The facility, which places a priority on amateur accomplishments for its pro wing, also welcomed Steve “Dr. Death” Williams, Red Bastien, the late Olympian-turned-pro Dale Lewis and the Great Gama, an Indian star, into its membership.

Emotion touched those inductions, as well. The always-talkative Bastien, who rose from the carnival circuit to become a top star, got teary-eyed when his name was called and could speak only briefly before he sat down. “I just can’t talk — I’m sorry,” he said, as he received a standing ovation.

As Williams, a collegiate football and wrestling star at the University of Oklahoma accepted his honor, he talked his about recovery from serious throat cancer in 2004.

Accompanied by his father, brother, and son, Williams thanked fans for their support through his ordeal, which cost him his larynx, and talked about his spiritual rebirth that has changed him into a new man.

“If you have a dream, follow it. But always put the Lord first. Victory will follow you,” said Williams, who also wrestled in a three-way match Friday night on a Waterloo show sponsored by Harley Race’s World League Wrestling.

It was hard to keep the spotlight off the Hennig family, though. Curt’s son Joe made his professional debut on the same card as Williams, teaming with Ted DiBiase Jr. in a tag team match.

In a show of generational solidarity, grandfather Larry accompanied Joe to the ring, and Race said he thought Joe gave a good accounting of himself for his first time in front of paying customers.

Joe had an unusual home-town advantage as the Hennigs turned Waterloo into Hennigtown with a bus caravan of members ranging in age from one month to 72 years. “We had the only day-care center on wheels,” Larry cracked before launching into a touching remembrance during the induction.

“To be in the Hall of Fame here with my son’s picture next to me, and to have my grandson wrestle last night and continue the tradition in wrestling is something that you’ll never understand how I feel, standing here at this moment,” said Larry, known as “The Axe.”

Larry credited Curt’s wife Leonice with standing strong for the family after her husband’s death, and her reflections on “Mr. Perfect” were even more evocative. “He wanted to see the smiles on people’s faces,” she said, her voice cracking. “He was perfect. He had the biggest heart. Everyone that knows him … I don’t have to explain how he was … Our kids were old enough to know their father. I thank God for that.” 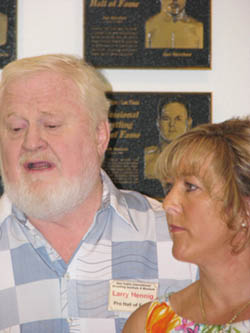 Ted DiBiase received the Frank Gotch Award for his contributions as a minister outside the squared circle, while Mike Chapman, executive director of the museum, won the James C. Melby Award, named for the late writer-historian and presented by Shelley Bonin, Melby’s daughter. Chapman, a noted wrestling author, has been the driving force behind the museum’s growth.

Bill Murdock of Eblen Charities was presented with the Lou Thesz Award by Thesz’ widow Charlie. Murdock was honored for his work in providing assistance to children, adults and families in western North Carolina who are battling illnesses and disabilities. He’s also known to wrestling fans as collaborator on the autobiography of former world champion Jack Brisco.

The induction was the first in the wrestling museum’s new building in Waterloo, a more spacious and convenient location than its previous home in nearby Newton. Waterloo also was the site of a Frank Gotch world title match in 1909 and hosted numerous pro and amateur doubts throughout the years.

Even so, with fans spilling out of the induction room before events started, it was clear that it could use even more space, if only for the wrestlers present, which included Verne Gagne, Danny Hodge, Brad Rheingans, Fritz Von Goering, Dick “The Destroyer” Beyer, Tom Andrews, and Mad Dog Vachon, among others.

Chapman said discussions are underway to buy an adjacent building for additional room.