Topps Tags are for kids

Those who are followers of my DVD reviews at SLAM! Wrestling know full well of the pitfalls of being the “taste-tester” on staff.

For every Bret Hart compilation, there comes yet another Diva fashion show that makes me want to hurl my remote into a wastebasket.

It’s not to say that the Diva recordings are bad, per se; it’s just not something that I would necessarily spend my hard-earned dollar on.

The same applies for collectibles reviews. Long-time readers will be familiar with my reviews of Topps’s WWE Heritage and other sets, and they’ll also know, likely from encountering me at events like the Sports Card Expo in Toronto, that I’m a major collector. In short, getting a Ric Flair autograph in a box of cards is the equivalent of finding Hart versus Curt Hennig on a DVD. 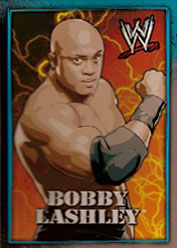 Just as there are Diva DVDs, so to are there collectibles that, perhaps because of my age, do not fly with me, such as Topps’s new release, Tags.

As the name implies, this is a 24-count series of army-style dog tags, featuring the stars of Raw, Smackdown and ECW. Rather than being full-out military-esque, with an imprint of name, rank and serial number, the fronts feature an admittedly beautiful artistic rendition of a press photo and wrestler’s name, while the reverse highlights a nickname or motto.

The checklist was well done by Topps, and includes a number of rising stars, such as CM Punk and Carlito, along with all-time favourites such as Steve Austin and Shawn Michaels. 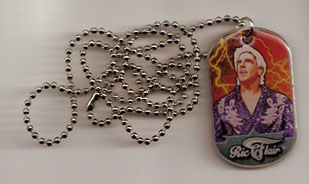 As a bonus, each pack comes with a trading card. These feature an expanded version of the tag artwork, as well as a brief write up on the featured superstar. While strong in concept, the cards were executed poorly, as virtually all of the cards we pulled from our box had damage. Some were minor imprints from the ballbearings along the tag’s chain, while others were full-out creases. Regardless of the accompanying collectible, there’s no excuse for damaged product in today’s era, where peak condition is a must.

As a way to further entice collectors, Topps has also included gold-plated tags. The gold is easily identified on the rim of the tags and on the chain, and look pretty sharp. It’s a neat little parallel that will get some kids ripping packs for some serious “bling” action.

While I have no doubt that there will be a lot of younger WWE fans that will go gaga over the product, I, unfortunately, cannot see the collecting community taking to them as quickly. Collectors, over the years, have had a number of outside-the-toploader concepts come their way, such as coins, stamps and pins, and have never really taken to them. The Tags would likely be better suited to some of those novelty machines you see at grocery stores than hobby shops.

Overall, it’s a decent product from Topps, but is more so a piece of merchandise than an actual collectible.