The visual of the diminutive Dudley Moore standing beside giant wrestlers like Andre the Giant, Big John Studd and Hard Boiled Haggerty had to have been one of the selling points behind the 1984 film Micki + Maude.

But the comedic actor was game for the part, stacking his 5-foot-2 frame up in the Blake Edwards-directed flick, where he tries to juggle two pregnant wives at the same time. 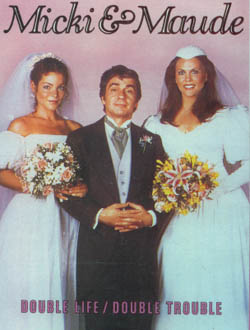 For a wrestling fan, the joy is in the significant part for Haggerty, who plays the overprotective father of Maude (Amy Irving). Unlike many children of wrestlers, however, in the film Maude is a cellist rather than an up-and-coming female wrestler.

Other wrestlers in the film include Chief Jay Strongbow, “Wildman” Jack Armstrong and “Judo” Gene LeBell.

Before introducing her fiance Rob Salinger (Moore) to her father, Maude soothes him: “Don’t worry, Daddy gets along with everybody.”

After the couple watches match with Gorilla Muldoon (Haggerty) against Armstrong, they go backstage. Haggerty gets great glee out of introducing his son-in-law-to-be around to the boys. He insists on buying them a house as a wedding present with his longest speech in the movie, an attempt to prove that wrestlers are a little more than just muscle.

“Rob, listen, Maude’s only going to get married once,” Muldoon opines. “I mean, why does a man wrestle for 30 years. What does he kill himself for? Calculating T-bills, IRAs, money market rates … It’ll make me feel like a king to do this for you.”

The film marked a bit of a comeback for the director Edwards. He had been a Hollywood darling in the late 1950s and early 1960s, writing and directing hits like Breakfast At Tiffany’s, The Pink Panther, Operation Petticoat and Days Of Wine And Roses. Then he lost his touch, delivering flops like The Tamarind Seed, Darling Lili and The Wild Rovers.

Edwards reluctantly worked with the difficult Peter Sellers on a number of other Pink Panther / Inspector Clouseau films before regaining his form with the Bo Derek starring vehicle, 10, which also had Moore and Edwards’ second wife Julie Andrews.

Then it seemed to fall apart again, with a couple of Pink Panther flops and The Man Who Loved Women. Edwards battled the Hollywood structure continually, and his scathing flick, S.O.B., was a middle finger to the establishment. 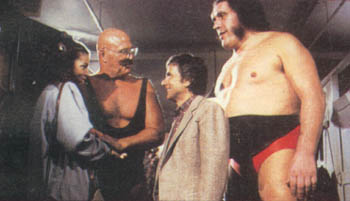 So to find him behind the camera with Micki + Maude was a bit of a surprise, especially since the script was not one that he had written; instead, it was penned by newcomer Jonathan Reynolds.

The reception for Micki + Maude was a relief for Edwards. “It was gratifying,” he told Toronto Star movie writer Ron Base. “After you go through a long period of — I can’t think of a better word — misery. There are those times that make up for everything.”

According to Irving, Edwards let the actors have a little input. No doubt the wrestlers took full advantage. “Some directors, in addition to shooting the master shot, make you do it from many different angles plus close-ups and two-shots, but Blake lets the actors play the scene out so that the actors are given the responsibility of the timing for a scene,” she said in a press release for the movie. “That way, rather than creating the humor, the camera creates the performances.”

As Micki, Reinking played an ambitious lawyer, the husband of Moore’s Rob. She also found working with Edwards interesting. “Blake has a different approach, a different point of view, and something comes out of it that’s unique,” she said in a press release.

Leonard Maltin called the film a “surprisingly warmhearted comedy that turns into old-fashioned farce” that runs out of steam. He gave it 2.5 stars. Pauline Kael praised the actors. “The movie may seem insipid to people who want something substantial, but there’s a special delight about the timing of actors who make fools of themselves as personably and airily as Dudley Moore and Amy Irving do here. He’s romantic in the silken, self-effacing manner of Cary Grant, and her acting is a form of heavenly flirtation.”

Roger Ebert liked it a little better, scoring it with 4 stars. “The last twenty minutes of Micki + Maude, as the two pregnant women move inexorably forward on their collision course, represents a kind of filmmaking that is as hard to do as anything you’ll ever see on a screen,” Ebert wrote. “The timing has to be flawless. So does the logic: One loose end, and the inevitability of a slapstick situation is undermined. Edwards and Moore are working at the top of their forms here, and the result is a pure, classic slapstick that makes Micki + Maude a real treasure.”

In the end, it was not the biggest movie of Dudley Moore’s career; but nor was it the worst. His biographer, Douglas Thompson, caught Moore in a reflective state. “I’m a little baffled why 10 and Arthur took off and others didn’t. I mean, I’ve known other pictures that I’ve done, Micki + Maude, Six Weeks, and I thought: ‘My God, this is terrific, not getting very much reaction.'”