Bob Geigel was a man’s man

Looking through my extensive file on Bob Geigel, who passed away October 30, 2014, at age 90 today after battling Alzheimer’s Disease, I am struck by two things — how many different people we talked about in the dozen or so times I interviewed him, and how little he talked about himself.

Take something as simple as his job at the local racetrack in Kansas City, where he was still working on a part-time basis up until about six months ago, when he fell and broke a hip. If you could hear a shrug over the phone, it would be Bob saying, “you can’t stay home all the time.”

Unlike some wrestlers from his generation, he didn’t stay on the road for decades and decades, working from town to town trying to make a buck. Instead, he settled in Kansas City, Missouri, and started promoting wrestling. It gave him a base and he didn’t have to travel, which meant there was more time for his wife, Vera, who he met at University of Iowa, and they were married for over 65 years, and their three daughters.

Most of the actual facts of Bob Geigel’s wrestling career are detailed in our 2007 feature about him: A lifetime of rewards for Bob Geigel. The newshook was the Art Abrams Lifetime Achievement Award, which he was about to receive at the Cauliflower Alley Club reunion in Las Vegas. 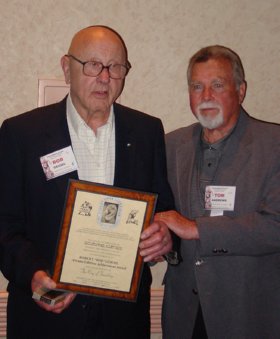 For those of us who were there at the banquet, it was quite the scene. Geigel’s family was all there, and his K.C. buddies, Bill Kersten (“Hellooooo wrestling fans!”) and Tom Andrews. Bob took to the podium and started to tell the crowd his life story, as in every single person he knew and wrestled, starting from his debut as a professional in 1942.

Consider the breadth of his stories at the CAC, which were concluded a little early, Geigel gently nudged from the stage.

Tom Andrews had the privilege of introducing his friend, who he also used to work for — think about how rare it is for a former wrestler to talk fondly of a promoter. They’d been buddies for 35 years, and Andrews brought up some of Geigel’s charitable works. Every year, Bob would visit hospitalized veterans on Valentine’s Day, for example. The Leukaemia Foundation was the chosen charity for the Kansas City promotion, and after few years, they had raised more money for it than any other company.

“Bob was, and still is, the real deal,” said Andrews.

No doubt a lot of the fondness is for Geigel the person and the bar owner, rather than the promoter.

“Geigel was noted for always wearing shower shoes everywhere he went. It was a common joke that he looked like he had arthritis in those toes,” said Omar Atlas in a Ring Around the Northwest interview from June 2005. “Geigel owned a bar called The Tender Trap where all the wrestlers hung out and drank the matches.”

Some wrestlers found employment in the bar as well, like Kay Noble, who was one of the few woman wrestlers not booked by the Fabulous Moolah, instead relying on Geigel to help with bookings.

“I really look up to Bob Geigel, he’s special in my life. He took care of me when I first started wrestling, as far as not letting anybody — you know how the guys are like dogs,” Nicoli said. “He just made it clear, him and Gust [Karras], be professional and don’t be ridiculous. He made sure I got booked, got good bookings. If I had a problem with any of the other promoters, money-wise, he always stepped in. He just took care of his people. He was a good promoter, he was an excellent wrestler. You couldn’t ask for a better man to be in your life.”

Many a wrestler has mentioned to me through the years how legit tough Geigel was, his background in amateur wrestling at the University of Iowa was no gimmick.

“The guy you really had to keep an eye on if you really wanted to get into a wrestling match was Geigel. Geigel would take your head off and put it on your foot for you, whether you want it there or not,” said the late Dutch Savage. “Bob was real easy-going, very likeable. I have nothing but the utmost respect for Bob Geigel.”

JJ Dillon laid it out in simpler fashion: “A man’s man, a guy that was physically a tough guy. That was Bob Geigel. That’s the type of person he was.”

Geigel had a story on everybody, and was a wonderful contributor for our Pro Wrestling Hall of Fame series of books.

There are so many tales that begin, “Let me tell you…” He called me, “Kid”, but then given his advanced years, I probably wasn’t the only one.

I’ll miss Bob’s stories, though it was pretty evident that the last time I called would be the last — his mind just wasn’t there. The final time I saw him was in Las Vegas at a CAC reunion, and it wasn’t much different.

He spend the last half-year in a Kansas City nursing home, and passed away there on October 30th.

But, the idea is to dwell on the positive, so here are a couple of funny stories he shared with me over the years.

One time in Kansas City, he and Harley Race convinced a girl to be a streaker for $10 and two free tickets. “We got the streaker in Memorial Hall. Bill Kersten, who’s sitting right here, was our ring announcer. But we knew we had to do something to get the people’s attention away from the ring and going across the stage. So we told Bill, ‘Just as soon as you say, “Good evening ladies and gentlemen, the main event of the evening is…” and then look towards the stage and say, “What is that?” If you do that, everybody in the house will look at the stage,’ and that’s where the streaker was going to be.”

They set it up with Geigel at one end of the stage, and Race at the other. “I gave her a push, and she was hopping across the stage like this, and it brought down the house. It made the Kansas City paper the next day and it was a successful. It really got people talking about wrestling again.”

Another story relates to sticking Stampede Wrestling promoter Stu Hart with the bill for dinner at an NWA convention in Mexico City. The restaurant, high up in the hotel, was recommended to them, but Geigel recalled that the “food wasn’t too good.” The dining companions comprised of the likes of Dory Funk Sr., Danny Pleaches, Stu and Helen Hart, Ricky Romero — about 10 of them in all.

“We get over there, and about the time to pick up the tab, I decided it would be restroom time. I said, ‘Where’s the restroom? Anybody know?’ Somebody told me, and I went back and stood behind a big post and watched. Pretty soon, Funk Sr. started looking around. I think the same thing went through his mind. He got up and he came up from behind me and said, ‘I caught you. You’re trying to stick Stu with the bill aren’t you?’ I said, ‘I thought about it.’ Funk and I watched. Stu was there and he’s looking. [Doing Stu’s voice] ‘Well, Helen, how much do you think it cost us?’ Anyway, Stu had to pick up the tab. He never got over it.”