For professional wrestling fans, defending one’s love of the sport is a lifelong battle — A battle that transcends the squared circle and lands within the superhero-filled realm of comic books. 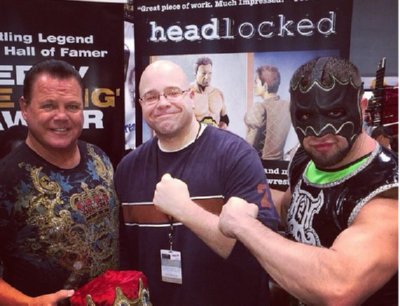 Traditionally, such endeavors have been laced with stories of wrestlers depicted as larger-than-life heroes fighting demons, according to Mike Kingston, author of the wrestling comic Headlocked: The Last Territory. But with his creation, Kingston attempts to put that stigma down for the count.

Kingston, self-taught in the art form, is in the process of seeking funding through Kickstarter for the second volume of his “cable drama” story that tells of a college theater major who finds his way into the world of professional wrestling. Kingston said he chose the fan-funded production method because of the similar business monopoly within comics and wrestling — both are “dominated by a singular aesthetic.”

“Unfortunately, I think sometimes who’s in the upper left-hand corner of your book matters more than what’s in the pages,” Kingston said. “[I want to] reach out to people and prove there’s an audience to the book. [There have been] so many bad wrestling comics, a lot of publishers are skeptical.”

“The people that read the first book have been jumping on to the next one,” Kingston said.

Stephen Escudero, who has backed both volumes of Headlocked and was literally drawn into the first volume due to that first contribution, said he initially thought it would be “just like another wrestling comic.” But after reading the story, Escudero said it felt like the story was written for him. 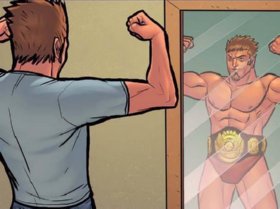 “I had very similar origins to the main character,” said Escudero, who was involved in theater during high school. “[I liked] how it shows wrestling from a performance angle and it really talks about how wrestling is like an art form.”

Alan Evans, a Headlocked backer and fellow wrestling comic creator, discovered Headlocked at a 2007 Wizard World Comic Con, right around the time he was preparing his own comic.

“[It] seemed like such a huge void that needed to be filled,” Evans said. “Just right off the bat, I was really excited to see what [Headlocked] would be all about.”

It became clear, according to Evans, that Headlocked was Kingston’s “love letter to professional wrestling.”

“[This is] obviously a guy who gets wrestling and wasn’t going to drop the ball,” Evans said.

For supporters like Evans and Escudero, their version of Headlocked: The Last Territory, Volume Two will feature stories and art from names such as “Hurricane” Shane Helms, Rob Van Dam and Frankie Kazarian, among others. Kingston said Helms and RVD both bought copies of volume one while walking around Artist Alley at a comic convention.

“[They] know the history of wrestling comics, the history of how wrestling is treated in the media in general,” Kingston said. “A lot of them just volunteered to help, recognizing that awareness is our issue.”

After that initial meeting, Helms kept in touch with Kingston because he liked the comic, though Helms “didn’t expect it to be as good as it was.” Helms said he brings Headlocked for his autograph table at shows, as well as mentioning it on social media to spread the word as often as possible because he has “such faith in what this book is.”

“Mike really nailed how hard it can be to break into pro wrestling,” Helms said.As Kingston sought contributors for Headlocked, Helms said the idea of his inclusion emerged through conversation.

“I’ve always kind of wanted to write a comic book anyway,” Helms said. “And since I can’t draw at all, writing would be the only other option. [When Mike] offered me the chance, I just jumped at it.”