When it comes to the comic industry over the last couple of decades there have been a number of celebrities and screenwriters who have been involved in a comic book series. Typically, these announcements have been treated with an equal measure of excitement and skepticism due to questions surrounding how much participation in the series they would have, in what capacity they would contribute, what the quality of the end product would be, and whether the public felt they were well suited with the craft involved with developing a comic book. 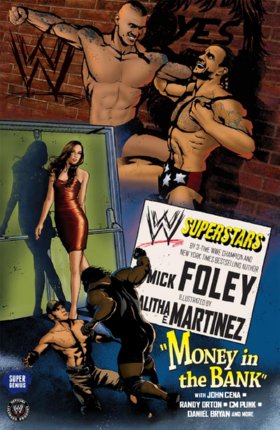 So when it was announced at the 2013 San Diego Comic-Con that WWE legend Mick Foley would be co-writing Papercutz’s WWE Superstars comic book series, while there was little doubt in terms of Foley’s abilities as a writer based on his past New York Times bestselling books, there were a lot of questions as to what level his participation in the series would be and how he would mesh with his co-writer Shane Riches.

Traditionally, when there have been two writers working on a comic book the roles have been split between one person primarily focused on the overall storyline and plot and the other person concentrating on writing the formal comic script. From there the comic script goes to the artist(s) for illustration and usually there is some degree of back and forth with the writers. At that point things can vary a bit depending on what method was used with regards to the comic script.

The Marvel Comics method made famous by Stan Lee usually resulted in the comic script being more of an outline and the artist was left to work out how they wanted to pace the story. From there the writer would ask for whatever changes they wanted and with the letterer would insert the dialogue and captions into the artwork. The approach that DC Comics and others have used over the years has been more of a fully fleshed out script which details what is to be drawn in each page and panel with the dialogue being very close to its finished form.

This of course leads into the question as to what approach Papercutz might have employed with WWE Superstars Money in the Bank comic. If this was 20 years ago when the Internet wasn’t as prevalent it probably would have been the DC Comics full script method with Foley only contributing to the storyline and plot due to his busy schedule. However, with the ability to stay connected through the Internet, the blending of the story to the point where one cannot detect any separation between the two writers’ voices, and the seamless integration with the artwork, it seems likely that Foley was fully involved in the writing of the plot, storyline, and script and perhaps even providing feedback to the artists.

With regards to the actual story itself WWE Superstars Money in the Bank comic places the various WWE Superstars in a kind of alternative crime noir world where instead of guns and knives the wrestlers utilize their wrestling holds when a conflict arises. Such an approach takes a bit of getting used, particularly for those used to the more traditional crime noir violence found in other comic series such as Frank Miller’s Sin City, Ed Brubaker and Sean Phillips’ Criminal: 21st Century Noir, or David Lapham’s Stray Bullets series. However, it proves fairly effective when the writers forego announcing catch phrases or what the wrestling holds are and simply trust Alitha E. Martinez and Puste’s artwork to tell the story. This tends to happen in the later chapters and is not entirely unexpected when comes to collaboration on a comic series because as the various members of the creative team get to know each other better, they also trust each other more and find better approaches between the art and the script to more effectively tell their story.In terms of the overall plot it centers on John Cena having gone to jail because of his being accused of stealing $10,000,000 and various other WWE Superstars all trying to manipulate Cena and find out where the money is. Curiously, out of all the wrestlers and personalities used in the story, the one that is given the most depth is CM Punk who isn’t even with WWE any longer. As the series goes forward it’ll be interesting to see how much Punk continues to be utilized and if the writers focus more on other WWE Superstars still on the roster.

The artwork employed by Martinez and Puste is fairly effective at creating the crime noir world of Titan City which everyone inhabits and the colours and inking properly give the world the darkness that is necessary for a story like this. However, with a series such as this one which is based on real people, how well it works is very much dependent on whether the artists are able to capture the likenesses in a way that doesn’t inhibit the story, but leaves no doubt who is who. In that regards Martinez and Puste have had mixed results with John Cena, CM Punk, Daniel Bryan, The Undertaker, and others being very recognizable and well rendered and the Bella Twins, AJ Lee, Curtis Axel, and Randy Orton all appearing a bit generic and modelled after similar designs. Still, as the story progressed this did improve somewhat and may just be a case of the artists needing more time to become familiar with each WWE Superstar.

Overall Papercut’s WWE Superstars Money in the Bank comic is a decent read with a fair amount of potential and it will be interesting to see how much Foley and Riches explore the depths of crime noir in the series.