Book a worthy celebration of 30 years of WrestleMania

I have difficulty explaining to my children what a momentous event the first WrestleMania in 1985 was. Even Hulk Hogan’s explanation about the feeling around it — “There was a buzz around the entire country. It was something I had never felt before” — doesn’t do it justice.

But now a magnificent new book, 30 Years of WrestleMania, will help me teach them. 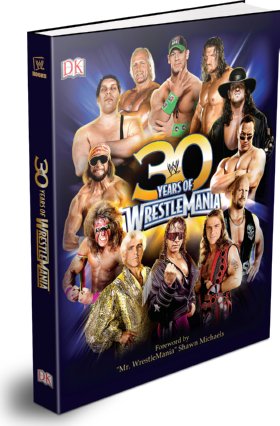 For me, and for fans from my generation, WrestleMania I was a turning point. My children are still relatively young, and we have watched the DVD together (I live in Quebec and there is no WWE Network yet!), but they are not getting it.

However, they get as pumped up as I do on WrestleMania Sunday, just like my brother and I did when we were young. They are dreaming all day about the matches and the big question on that day: “What’s gonna happen?”

30 Years of Wrestlemania, written by Brian Shields, is an incredible opus to sport entertainment’s ultimate stage, where superstars become legends and where legends become immortals.Shields is one of the men behind the WWE Encyclopedia, if you have read the Encyclopedia, I know that most of what I am going to add is unnecessary and you are already running to get a copy of 30 Years of WrestleMania at a bookstore near you.

Just like with the Encyclopedia you get to relive the matches and everything that made each WrestleMania something special with incredible description and pictures that only the WWE can provide. The front cover is incredible with all the major superstars that made the WWE and WrestleMania so special.

What makes this book so different and even better than the book by Basil Devito and Joe Layden that came out in 2001 is how he navigates the very difficult job of explaining the storylines from WWE television, while also detailing the momentous job of putting those larger-than-life events together behind the scenes.

He also went above and beyond with what is currently known about the history of WrestleMania, conducting exclusive interviews with Vince McMahon, Linda McMahon, Hulk Hogan, Steve Austin, and The Rock — among others — for this project. Shawn Michaels, Mister WrestleMania himself, even writes a special foreword.

You get to peek at the very real emotions of wrestling greatest minds, like Pat Patterson, as their visions comes to life. WrestleMania VI is a good example — The Ultimate Challenge, with Hogan’s World title versus the Ultimate Warrior’s Intercontinental title, remains one of my favourite WrestleMania moments of all time. Learning that Pat Patterson and Vince McMahon took the time to go and watch the ending in the crowd at SkyDome in Toronto and shed tears together as it all came together, the pressure finally off, gave me goosebumps.I don’t want to give too much away, as you should discover this on your own if you love wrestling and sports entertainment. However, my favourite story is about WrestleMania III and the final production meeting where apparently, if cameras had been rolling, the Vince McMahon speech would have given Paul Heyman’s speech at ECW Barely Legal a run for his money.

If this was not enough, each copy comes with an exclusive Topps collectible trading card featuring The Undertaker. Also to make sure each and every copy is special, one of five collectible bookmarks is randomly inserted with each book. I got lucky and I got The Rock versus Stone Cold epic rivalry that was part of three WrestleManias. I need now to find a way to get the other four!

This book will truly help fans from different eras grasp how different — and yet how similar — the magic of wrestling operates through generations. I waited at my video store to be the first to rent WrestleMania 1-2-3-4 on VHS and then watched 5-6-7 on giant screen at the Montreal Forum. My sons started with pay-per-views and now we just can’t wait for the WWE Network so we can have the possibility to watch WrestleMania on the computer. I attended my first WrestleMania last year and I now hope to one day attend with my children. We still share that passion together, just like all the wrestlers, producers, referees, cameramen, and creative people who constructed each Wrestlemania.This is what will not change for the next 30 years — WrestleMania moments will keep being created and family will bond over the exploits of superstars who will attempts to reach for immortality. I hope that a 60 Years of WrestleMania book can be written and that it will be as good as this one.

I can only see one way to end this and to prepare you to fall in love all over again with this book by giving the final word to Vince McMahon: “Welcome to the greatest sports-entertainment spectacular of all-time. Welcome to WrestleMania!”