A lifetime of rewards for Bob Geigel

Bob Geigel has seen and done a lot in wrestling in his 82 years, and it’s payback time.

He will be presented with the Art Abrams Lifetime Achievement Award this Saturday at the Cauliflower Alley Club reunion in Las Vegas, which also serves as a family reunion for Geigel.

“I’m excited, I like to go to Vegas and my whole family is going,” Geigel told SLAM! Wrestling. “They all went last year, and they’re all going back this year. My wife, my three daughters, my son-in-law and one of my grandkids are going.” 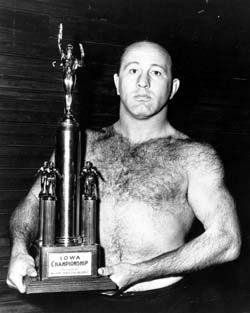 Geigel was born October 1, 1924, in Algona, Iowa. He played football and wrestled while in high school although it took some persuasion on his father’s behalf.

“The wrestling coach was also an assistant football coach and asked me to try out for wrestling,” recalled Geigel. “My father said I had to unload corn on Friday nights. Then one night, the coach and his wife came to my house to eat supper with us. The coach talked to my dad, and my dad said it’s hard to let me go at that time in the fall because we were unloading corn every night. The coach said ‘I can get him out by 6:30’ and my dad agreed.”

In 1946, Geigel enrolled at the University of Iowa after serving in the U.S. Navy for nearly four years. He lettered four times in football and three times in wrestling—placing third in 1948 at the NCAA championships.

“Bisignano and I were talking one afternoon, and he asked me what I was going to do after college,” recalled Geigel. “I said I might have a tryout with the Chicago Cardinals. He said, ‘You’re not going to make a lot of money and you will probably get hurt so why don’t you let me help you get into professional wrestling?'”

After graduating with a degree in Physical Education, Geigel made his professional wrestling debut in Tampa, Florida, working for Luttrell.

Geigel then made his way to Texas to work for Cal Farley’s Boys Ranch with the goal of wrestling part time. It was during this time that he befriended the late Dory Funk Sr. while working for Amarillo, Texas promoter Dory Detton.

According to Geigel, “Funk Sr. was a heck of a guy. He’s from Hammond, Indiana. [He was an amateur wrestling] state champion in high school. Then he went to Indiana University for one year. He wrestled down there for Billy Tom, who was a wrestling promoter at that time. Then he went into World War II. I think he went into the service in ’42. He was aboard ship for, gosh, I don’t know how long. He was on a destroyer, I think. Then he came back and went into Texas to wrestle, and got a job at Boys Ranch. … He ended up managing. Him and Verne Gagne, they’re responsible for me being manager of the Boys Ranch. So I took Funk’s place when Funk went into wrestling full-time. Well, I was wrestling one of two nights a week when I was working there. I really liked to work at Boys Ranch. Funk did too. But you couldn’t make any money there.”

After serving as superintendent at the ranch for a year and half, Geigel left to begin wrestling full time in 1952.

He then spent the next three years wrestling in Columbus, Ohio, during the winters and Nova Scotia during the summers. After a short run in New York, Geigel made his way to Amarillo, Texas, where he had a successful run as “Texas” Bob Geigel.

“We saved a little money in Texas, I saved some money before that, and we bought a farm 30 miles out of Amarillo, Texas. We had it until January of this last year, and we finally sold it. The Funk family was very close to my family. Dory and his wife, Dorothy, were real good friends of my wife, my kids and I. Our farm joined their farm. They had a ranch in Umbarger, Texas. We were right next to them. I keep in touch with Terry a lot. I don’t see Dory Funk Jr. very often because he’s in Florida.”

During his illustrious career, Geigel held numerous singles and tag championships in both the AWA and NWA. He was one half of the AWA world tag team champions with longtime friend “Hard Boiled” Haggerty on three occasions. Geigel was also Central States tag team champion with a variety of partners ranging from Bobo Brazil to The Viking. His most famous pairing was with “Bulldog” Bob Brown. 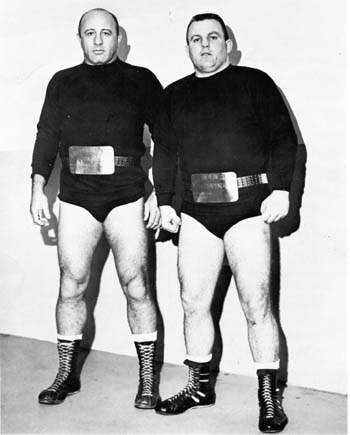 Fellow 2007 Cauliflower Alley Club honoree, J.J. Dillon, described Geigel as, “A man’s man, a guy that physically a tough guy. That was Bob Geigel. That’s the type of person he was.”

After moving his family to Kansas City, Missouri, St. Joseph promoter Gust Karras approached Geigel with the notion of participating in the promotional side of the business. Geigel partnered with Pat O’Connor to buy the Kansas City promotion from George Simpson for approximately $3,300. Geigel, O’Connor and Harley Race formed Heart of America Sports Attractions Inc., also known as Central States Wrestling, which continued to serve among the NWA’s most prominent divisions until it was purchased by Jim Crockett Promotions in 1986.

Geigel described his relationship with the 2006 Iron Mike Mazurki Award winner, Harley Race: “Well, I wrestled him once or twice as he was starting out. I didn’t wrestle him a lot, but Harley, Pat O’Connor and I became pretty good friends when Harley was wrestling. Then Harley was in a car accident. He was driving down the road with his wife. A guy driving a truck loaded with chickens went to sleep, went over to hit Harley on the other side of the road over a hill. It killed his wife and child. Then Harley was in the hospital for a while after that. When he got healthy, he started wrestling again. Harley was a pretty good friend of Gust Karras also, and we took Harley into our business.

“We started working a little bit with Sam Muchnick in St. Louis,” continued Geigel. I wrestled and played ball against Verne Gagne while in college so we were acquainted pretty well. Then Verne, Pat O’Connor, Harley Race and me bought St. Louis from Sam Muchnick probably around ’69 or ’70.”

Geigel played a role in advancing the careers of many ranging from Roddy Piper to Jesse Ventura.

“I had a friend in Minneapolis, Eddie Sharkey, who had a weight training studio,” stated Geigel. “Eddie called me one day and said ‘I got a guy up here that I would like to send out. He’s getting ready, and he’ll be a good performer eventually.’ It was Jesse Ventura, and he came here to work for us, and he was a nice guy too.

“When Jesse was running for governor of Minnesota, I got 11 calls from different people — radio stations and television stations from around the country because we started him here,” continued Geigel. “Everybody was looking for dirt. They weren’t looking for nice things to say about Jesse, they were looking for bad things. I guess that’s press and the way they operate. I said, ‘Listen, don’t ask me anything about Jesse that is bad because I don’t know any bad things about Jesse Ventura. He’s just a nice guy.’ And he was a nice guy. He was a good guy to work for you, and he had good matches. He wasn’t lazy, and I really enjoyed having Jesse Ventura in the territory.”

Today, Geigel still resides in Kansas City with his wife of 60 years, Vera. During the week, he can be found at the Woodlands Racetrack where he works part time. When not working, he will occasionally visit Harley Race’s World League Wrestling.

“Harley’s doing a tremendous job. He’s training his guys, and he’s training them good. When they come out of his school, they’re usually pretty good performers. He slows them down a little bit and makes them think. Overall, I would have to say that Harley might be one of the better trainers in the country.”

Whether as a wrestler or a promoter, Geigel has left an indelible mark on the wrestling world.

“It’s really nice that the Cauliflower Alley Club is giving me this award, and I’m kind of surprised,” said Geigel. “I’m not really a person that dwells on other people doing things for me. I appreciate the honor though, I think it’s wonderful.”

Bob Geigel was a man’s man