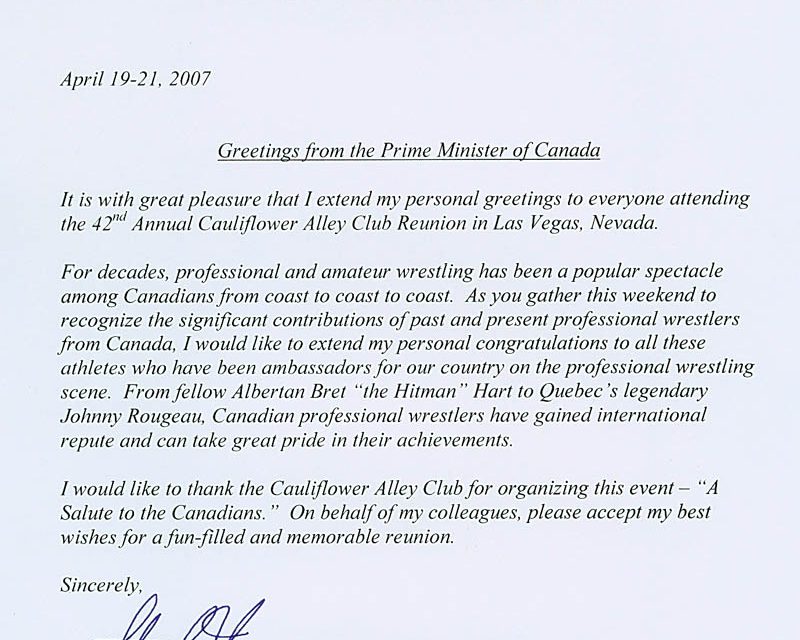 The gathering of the Cauliflower Alley Club (CAC) is always a special time for those who make the pilgrimage to Las Vegas, Nevada for the annual event. But this year will have added significance if you happen to call the Great White North home.

“In the 40-plus-year history of the CAC, we have never singled out a specific type of wrestler to honour, and no group of people are more deserving to become the first than the Canadian CAC group,” said CAC board member Dean Silverstone. It was Silverstone who christened the idea of making the CAC Friday night “Baloney Blowout” into a tribute theme. “The CAC recognizes contributions when they see it, and no specific group has done more for our sport than have our friends up north.”

This year’s reunion will once again be held at the Riviera Hotel and Casino in Las Vegas, from April 19 to the 21st. The CAC is a non-profit organization, dedicated to the preservation and enhancement of the ring of friendship among its members.

In advance of the salute to Canadian grapplers, a special accolade was given to the CAC from the highest political office in Canada.

“It is with great pleasure that I extend my personal greetings to everyone attending the 42nd Annual Cauliflower Alley Club Reunion in Las Vegas, Nevada,” wrote the Right Honorable Prime Minister of Canada, Stephen Harper, in a letter to the CAC. “For decades, professional and amateur wrestling has been a popular spectacle among Canadians from coast to coast. As you gather this weekend to recognize the contributions of the past and present professional wrestlers from Canada, I would like to extend my personal congratulations to all these athletes who have been ambassadors for our country on the professional wrestling scene.”

According to CAC executive vice president, Karl Lauer, the decision to make the first ever tribute night dedicated to Canada came as a no-brainer.

“It just seemed natural to do the first tribute night to the Canadians, especially with Don Leo Jonathan is to receive our highest award, the coveted Iron Mike award, and Bob Leonard to receive a special award,” said Lauer. “Canada has probably produced more wrestling stars then any other country that went on to become international recognized wrestlers.”

Helming the event will be none other that SLAM! Wrestling’s producer, Greg Oliver, and the one time coach of the now defunct Team Canada faction from TNA, Scott D’Amore.

“I was humbled to be asked to co-host,” said Oliver, author of The Pro Wrestling Hall of Fame: The Canadians. “It’s an honour, and it will be lots of fun. I just hope that Scott behaves himself.”

Check in with SLAM! Wrestling for reports from the CAC gathering this weekend.