Wrestling hailed as one of Canada’s greatest exports at CAC

LAS VEGAS—You won’t find forests of tall, whispering pines or Mounties sitting high in their stirrups in the Nevada desert.

But for one night, the bright lights of Sin City shined on Canada as the annual Cauliflower Alley Club reunion delivered a special tribute to the nation’s remarkable contribution to the ranks of pro wrestling.

With more than two dozen Canadians on hand, from world champions to behind-the-scenes stalwarts like promoter-photographer-publicist Bob Leonard, the nation’s wrestling industry showed that its influence extends far beyond its border. 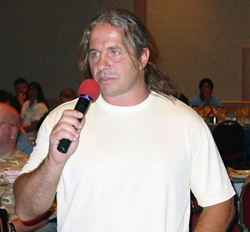 It was the first such “tribute” night at a Cauliflower Alley reunion and most in the crowd said they thought the program, hosted by SLAM! Producer Greg Oliver and TNA manager Scott D’Amore, moved along at a brisk clip as Canadians shared memories of their careers.

Perhaps the most impressive statistic of the night came from Pepper Martin, who recalled a road trip during which he and another wrestler were recounting grapplers from the steel city of Hamilton. Eventually, the count climbed to 62 from the gyms of legends like Al Spittles and Jack Wentworth.

“Now that’s a lot of talent coming out of a town like Hamilton, Ontario,” he said.

Enter old-timer Jack Laskin with a ready explanation. Tongue in cheek, Laskin said a band of Tennessee residents, escaping the penny-pinching ways of skinflint promoter Nick Gulas, headed to the Arctic in the 1930s to claim free land offered by the Canadian government. There, they taught Eskimos to wrestle and introduced the concept of wresting bears.

“When the Studebaker [car] plant opened in Canada, they all came back down,” he cracked.

The lure of Canada is too much for states-side wrestlers, Paul “Butcher” Vachon joked, poking fun at the president of the Cauliflower Alley Club. “Red Bastien all of a sudden claims to be Canadian. I said although it’s true he’s pretty close, from Minnesota, he was just as stiff in the ring as all the Canadians I wrestled with.”

The hit of the night was the appearance of Bret “Hitman” Hart, who with brother Ross, represents the first family of Canadian wrestling.

“He’s the reason who so many of us in this generation have been able to succeed because when they didn’t want to open doors for Canadians, he used his clout to kick that door open and let us walk through,” D’Amore explained.

Hart, mobbed by fans anxious to meet the former WWE champ, praised the wrestlers who preceded him and singled out a memory of Utah native-turned-Canadian Don Leo Jonathon as particularly special.

“There’s a picture that’s still around of Don Leo dropkicking Andre [the Giant]. The funny thing about the picture is Andre is standing straight up and Don Leo is coming down on an angle. You realize how high he jumped to deliver that dropkick and what great workers there were back in the old days.”

Gil Hayes, a longtime fixture in western Canada, said Jonathon’s athletic talents caused him more than a few problems when he tried to emulate the big man’s ability to nip-up – or hop from his back on the mat to a standing position without using his arms. 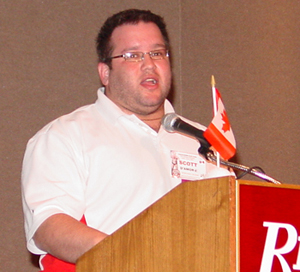 “He was the only man who was 6-6 and weighed 300 pounds and could do a nip-up before you could blink and that just turned my crank,” he said. “I tried to emulate Don Leo Jonathon’s nip-up. I strained more muscles trying to get my lead butt off of that floor.”

And Jonathon, after saying a few words in French, disclosed that the Canadian government has finally issued him a Canadian passport.

The annual reunion concludes today with a banquet that honors several wrestling greats. Fittingly, Martin is the master of ceremonies.