The 42nd annual Cauliflower Alley Club banquet was a mixture of music, mirth, and memories in a three-and-a-half hour package April 21 that perfectly reflected the extravaganzas associated with its host city.

In fact, there’s no other place that wrestling fans could see a group of their favorites from days gone by standing arm in arm, belting out the lyrics to a Frank Sinatra classic. 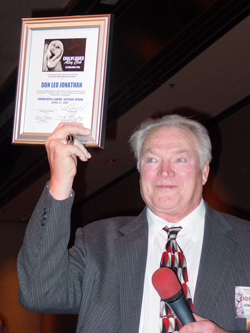 “Yes, we did it our way,” some of the business’ most familiar figures crooned in and out of key as the curtain fell on a production that, including a prime rib dinner, lasted three and a half hours and saw 15 awards handed out to members in all branches of the profession.

Mix in former star Pat Patterson’s rendition of Louis Armstrong’s What a Wonderful World, master of ceremonies Pepper Martin’s skit as the Godfather, and some serious stemwinders, and it was easy to understand why Martin could crack: “The Academy Awards go long and so do we.”

While the club’s honorees for 2007 have been known for months, one unexpected announcement captured the attention of an audience that included more than 400 fans and wrestlers.

The late Owen Hart was cited for his dedication and commitment to wrestling nearly seven years after he fell to his death during a stunt that went awry during a WWE event in Kansas City, Mo.

The award came as a surprise to brother Bret, who was at the banquet to honor old friend Bob Leonard, a key behind-the-scenes player in western Canada for years.

“He was in a lot of ways the most special of all the Harts … He was a real one-of-a-kind,” Bret said after recounting some of his brother’s notorious pranks. “I know everyone in the wrestling business knew what kind of special guy he was.”

Added Ross Hart, a regular at CAC events: “He took it seriously enough to enjoy wrestling hard in the ring but he never lost his camaraderie with the boys.”

The other major piece of news at the banquet was Red Bastien’s decision to step down from the CAC presidency after a seven-year stint. Bastien said he thought it was time to hand off the post to someone else –- in this case, Nick Bockwinkel, who has been vice president.

“I hope this thing continues to go on forever,” Bastien said.

Under Bastien’s direction, club membership is at an all-time high and its financial standing has never been better, executive vice president Karl Lauer reported. And, in the ultimate gesture of respect, Patterson mimicked kissing Bastien’s ring as he exited the stage as president from the final time.

Both delivered short and heartfelt statements after a day in which former Olympian Hodge good-naturedly demonstrated his unparalleled repertoire of submission holds to anyone willing to learn firsthand about his expertise in catch-as-catch-can wrestling.

The banquet also had a foreign flavor as Takeshi Morishima, current champion of the Ring of Honor promotion, received the Future Legends Award, and ex-world champ Harley Race presented a plaque of recognition to Pro Wrestling NOAH, the influential promotion from the Far East.

Some of the highlights of other award presentations: 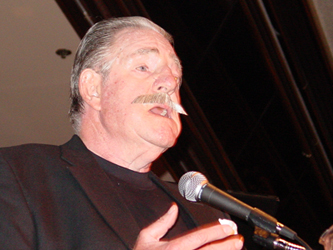