Woody Farmer may not be a name familiar to everyone, but recently, he’s been setting records that won’t be touched anytime soon by any wrestling family — not by the Ortons, the Guerreros or the Harts. At 78 years old, he’s still in the ring, creating a three-generation tag team with his son and grandson.

Dubbed “Team 3 Generations,” Farmer works with his son Rex (a.k.a. Hawkeye Shane Cody), and Rex’s son, Rex Jr., who wrestles as Riot. Their first-ever match together was two years ago on a Mike Modest/Donovan Morgan promoted Iron show that brought out a multitude of press and garnered magazine coverage in Japan, Mexico, Europe and Stateside, in the Pro Wrestling Illustrated magazine family. 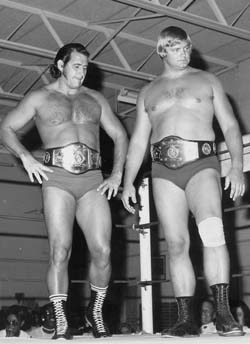 And the team they defeated in straight falls? It was composed of three veteran wrestlers Farmer also trained.

Farmer has been a wrestler since the 1960s, trained by the great Ray Stevens, a man he still admires, a decade after The Crippler’s death. “There was none better than Ray,” said Farmer. “Ray, of course, was broken in by his famous wrestling wife Teresa Thies, who took care of him until he passed away from lung cancer. Alexis Smirnoff and I watched over Ray along with Teresa until he finally passed away. He just wouldn’t give up cigarettes and beer, but that was Ray Stevens.”

The early days for Farmer were on the Northern California, Hawaii and Las Vegas circuits, promoted by Roy Shire. He soon worked throughout the Southern U.S., and had a good run in Los Angeles in the mid to late ’60s, wrestling the likes of Freddie Blassie, Buddy “Killer” Austin, Don “Arson” Carson, Crazy Luke Graham, The Sheik (Ed Farhat), “Crybaby” George Cannon, “Two Ton” Harris, Mark Lewin, Pepper Gomez, The Medics, Arman Hussein, “Iron” Mike DiBiase and others. Often he’d do feats of strength like bending steel bars, tearing telephone books, and having cinder blocks broken on his stomach while resting barebacked on a bed of nails.

Internationally, Farmer did several tours of Japan, and traveled to Australia, working with Pepper Gomez and Killer Kowalski .

“I worked in Puerto Rico and parts of South America and had one tour for Otto Wanz in Europe too — we had a pretty decent match,” recalled Farmer. “I loved when I got the chance to work in Canada a lot too for Verne Gagne’s partner in Winnipeg, Al Tomko. I also worked for Verne a lot in the early ’80s.”

Also in the 1980s, Farmer began working for former NWA president Bob Geigel in Kansas City, and was one of the very first tag partners for rookie Michael Hickenbottom, better known to fans as WWE icon Shawn Michaels.

“Michaels got his fanny whipped when he started,” laughed Farmer. “But he was a quick learner and we’re all so proud of everything positive that he’s accomplished. He and I were Central States champions for Geigel; it was the student and the teacher gimmick when we were paired up.”

After Kansas City, Farmer began promoting with other post-Shire promotion wrestlers and had quite a bit of success in Northern California towns like Hayward, Newark, San Jose, Clearlake (where Farmer has a piece of property on the water) and more. He still promotes and helps book big indy shows today, but has enjoyed a run with his family on cards he’s not promoting at all. And they’re in big demand wrestling as a six-man unit every few months.

Northern California wrestling fans would have first been exposed to Farmer’s son, Hawkeye Cody (working as a heel), on the Bay Area Wrestling show, a rare local show in the post-WWF-nationalization era.

Many got their start with Farmer in BAW — Mike “Crash Holly” Lockwood, Jason Styles and it Chris Jericho’s first territory outside of Canada and Smokey Mountain Wrestling. Farmer also helped book a huge all-women’s promotion and show in 1991 with a highlight being a title versus title with The Fabulous Moolah going to a draw with Misty Blue Simms in their first-ever encounter. Debbie Combs, Candy Devine, Malia Hosaka and many modern-day greats wrestled on the show. (Farmer’s old boss, Roy Shire, traveled to the show with this writer and remarked how much he enjoyed it, and how much he missed the boys like Woody who he used to terrorize with yelling fits in the locker room in the ’70s Cow Palace days.)

Today, Farmer couldn’t be more proud to set all kinds of records that probably will never be equaled nor broken with his wrestling son and grandson.

“I don’t think you’ll ever see any granddaddy wrestling in the ring with his son and grandson. I’m just very lucky and proud all at the same time of my guys,” he said. On a recent show, his daughter-in-law, “Luscious” Linda — Cody’s wife and Rex’s mom — joined the fun, accompanying the trio to the ring as a valet. She’d been lured out of retirement, after 15 years at Cody’s side. 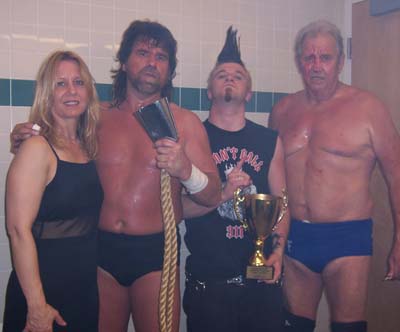 “My dad’s been a real legend and gets a great response wherever he goes when people recognize him. He helped start a lot of careers like mine and my wife, and always gives back to wrestling,” said Rex Farmer. Besides being proud of my dad, I’m also proud of my son, who chose the name Riot because that’s the kind of response he gets from the girls. In all seriousness, it’s really something we’re the only family with a granddad, dad and son wrestling.”

Riot is a relative newcomer compared to his tag team partners. “I’m learning every match I’m in and who better to learn from than my dad and grandpop? My dad’s held the BAW title longer than I think anyone else, like a Moolah and even showers with that thing,” he said with a laugh. “I hope to get my fiance doing some valet stuff for the fans too just like mom. I wish we could get my grandma to come out with us each time we wrestle too!” 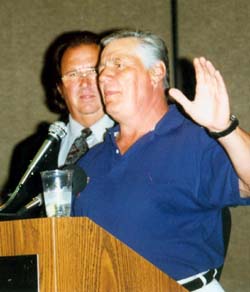 Farmer admitted that some of his opponents, even names like Aaron “Jesus” Aguilar, “Boom Boom” Comini, “Vicious” Vic Grimes, consider taking it easy on him in the ring. “Some of these name kids of today are afraid they might hurt me, so I stretch ’em a little and surprise the heck out of ’em.”

Another surprise: Farmer is quick to bleed and enjoys the hardcore style. Recently after bending a thick steel bar with just his bare hands, he used it along with chairs and tables as gimmicks. Having progressed from a Yukon Eric-type strongman who could mat and chain wrestle with the best of them, Woody is equal parts Stu Hart and Terry Funk these days. “You won’t be seeing me do a moonsault, but I’ll do everything else I can. I just have a lot of fun out there and keep going at it because I enjoy it.”

“I’ve personally enjoyed every aspect of the wrestling business I’ve worked in for over 40 years now,” explained Farmer. “Wrestler, promoter, strong man. I still have a lot of things left to do in the biz.”

CHRIS JERICHO ON WOODY FARMER
I went to San Francisco and Hayward California because my Dad happened to be down there and saw Bay Area Wrestling on Sports Channel America back in 1992. I was looking for a way to break into the States so I went down there to work for Woody. It was ridiculous! It was in this little studio in front of 20 people. I lost to The Spanish Hitman managed by Johnny Mae Young, yes the same one, in my first match and lost to Shane Cody his son. Then I won against a guy named Luscious Larry. Woody was all ‘how do you feel about your big win tonight?’ and I was like ‘Dude, if I stand on the top rope my head goes through the roof, I don’t know how big of a win this is.’ I didn’t really know who Woody was but he gave me a chance to work on his show which was cool. It was another step for me to become the wrestler I became was from spending time in Bay Area Wrestling.