Justin White: Rookie on the rise

When Justin White, 19, chose to take psychology in college, he didn’t aspire to be the next Sigmund Freud. And rather than concerning himself with the Oedipus complex, he was far more interested in delivering an overhead suplex. 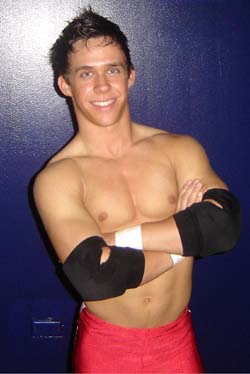 With an appreciation for what makes us tick, White has tried applying the teachings from the classroom to the beatings in the ring. Though he admits the two are very different, he feels wrestling is at its best when smart psychology is involved.

“Matches are built on psychology — everything has to make sense and there has to be a reason of everything,” he said. “That’s the way it has to be or else you’re getting messy and that’s when people get hurt.

“I’ve never taken a bump that wasn’t needed. I’ve taken some crazy ones, but I would never take a 20-foot fall off a ladder just for the sake of a crazy bump.”

After finishing his training with the NWA Québec Torture Chamber in Montreal, White has been wrestling professionally for over a year now. At 5-foot-6 and 165 pounds, he employs a no-nonsense, submission style in the ring. His finishers include the guillotine choke and the juji-gatame armbar (also known in wrestling as a cross armbreaker).

White has achieved a fair amount in his short career. Last year he captured the NWA British Commonwealth championship and defended it in four different countries before dropping the title in Ireland. In perhaps his biggest honour so far, White was named the 2006 NWA rookie of the year.

“I found out from my trainer, Dru Onyx,” White said. “He phoned me up and said, ‘Congratulations.’ I said, ‘Thanks, but what for?’ He said, ‘Oh, you’ve just been named NWA rookie of the year.’ It showed me that my hard work was paying off because guys like Petey Williams and Black Tiger held that honour before me.”

Though he feels White had a great year, Onyx admits to being a little surprised by the decision.

“I was actually a bit blown away because he wasn’t chosen by me or anyone else who really knows him,” Onyx said. “It was decided by a committee that was watching all the matches in the NWA. They had no contact with me and they unanimously awarded it to him.”

Accolades such as these have only intensified White’s desire to pursue wrestling as a profession. And though the risks involved are great, he said he will continue his education just in case.

“Even though I take wrestling very seriously, I’m well aware of the injuries and risks involved,” he said. “I definitely want to pursue wrestling as a career, but it’s always good to have a backup plan. I’ve stayed in school just to make sure there’s always something behind me to fall back on.”

Growing up mesmerized by matches the likes of Bret Hart and Mr. Perfect from SummerSlam 1991, White knew early on that he wanted to wrestle for a living.

“I grew up watching Saturday morning wrestling like every other kid at the time,” he said. “I was a huge Bret Hart fan; he was a big influence on why I wanted to start wrestling. I was really impressed with his ability and that influenced my own style of wrestling.”

As he got older, he began taking wrestling more seriously. As a result, he started working out more and getting in shape. When he turned 16, he met Onyx and joined the Torture Chamber.

“I remember the first time he and two other students came to me and asked about the school,” Onyx said. “When they asked about the curriculum and I was explaining what we teach, I just remember how attentive he was. He was able to just inhale the information he received; he just absorbed it.”

David Marquez, former vice president of New Japan Pro Wrestling and current member of the NWA board of directors, remembers having White train at the Inoki Dojo in Los Angeles. While very impressed with his in-ring ability, he said there’s still more work that needs to be done.

“He caught on pretty well; he’s extremely athletic,” Marquez said. “The technique was a little off here and there, but that takes years and years to perfect. He’s got lots of time; he’s still young. But I really think his ability is there; I can’t talk negatively about that.”

Onyx agrees somewhat. He said more matches and experience would certainly lead to improvement, but he feels White’s technique is excellent.

“When he started we were running beginner practices on Monday and advanced practices Wednesday,” Onyx said. “He would show up for the class Monday, but then he would come back Wednesday and just watch. His knowledge of wrestling is just tremendous. So when he got in the ring and I showed him something, he’d be able to mimic it in seconds.”

Though impressed with White’s ability, Marquez said there is one setback that no amount of training can fix.

“He’s a very strong willed and determined wrestler, but with the nature of the business being what it is, I unfortunately think his height may hold him back,” he said. “I think he has all the ability in the world to continue, and I dare say show up in TNA or WWE, but his height is a setback.”

Onyx admits that height can definitely be a problem, but he was quick to mention that White would be a perfect fit in TNA’s X-Division.

“In wrestling you have to be in the right place, at the right time, doing the right thing,” Onyx said. “I believe he has a better chance of making it than anyone else I’ve seen. I’m not saying that just because I trained him; other people have made that same prediction.

“Wherever he wrestles, someone comes up to me and says, ‘That kid is going somewhere.’ He can go far as long as he remains healthy and dedicated.” 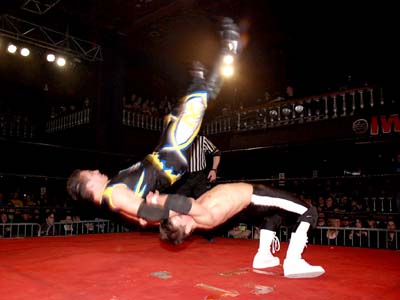 THE BATTLE BETWEEN HEAVEN AND HEEL

White feels he’s a born babyface in the ring, but Onyx said deep-down beats the heart of a heel.

“My nickname for him is ‘Superbrat’ because he has a mischievous look in his eyes,” Onyx said. “I started training him when he was 16 and he looked like he was as good as an angel. But when he got in the ring, everything he did was heelish.

“I remember we were practicing small packages and every time he did one he would grab the tights. I said, ‘Dude, what are you doing?’ and he replied, ‘I don’t know; I’m pinning him.’ So I said, ‘Who do you see pin like that? Stop it.'”

In his book Have a Nice Day: A Tale of Blood and Sweatsocks, Mick Foley said the average fan cares more about the wrestler and their character than any fancy moves they pull of in the ring. Onyx feels once White embraces his heelish nature, he will develop a great in-ring persona.

“Wherever he goes, he gets a pop and the girls go crazy for him,” Onyx said. “I’ve always said he’s like a one-man boy band, but I think his charisma would show more as a heel because he’s a funny dude. He’s charismatic as a babyface, but he would really blossom as a heel.”

White remains steadfast in his belief that he’s meant to be a fan favourite, but at the end of the day, he would have no problem going heel to please the fans.

Neil Springer is an aspiring young journalist who works as an online editor and writer for Canoe.ca. He enjoys long walks on the beach and jumping spin kicks, preferably at the same time.