Two middle fingers up for The Condemned

“Stone Cold” Steve Austin’s new movie, The Condemned, has the same basic ingredients of a wrestling match: a good guy, a dangerous opponent or two, and a coveted prize that they fight over. Throw in a dash of drama, a pinch of comedy, heap in plenty of violence, stir thoroughly, and what you’ve got is an exciting, intense cinematic can of whoop-ass.

In this newest release from WWE Films, Austin stars as Jack Conrad, a death row prisoner who soon finds out that there are worse things than living your life in the hell of a cell. He and nine other inmates are purchased by a wealthy internet television producer Ian Breckel (played with the right amount of sliminess by Australian actor Robert Mammone), and dropped onto a remote island, where they’re forced to participate in a human cockfight, battle-royal style, which will be broadcast over the internet. The last person standing before the time runs out gets a prize far more valuable than a championship belt — in this case, they get to live. 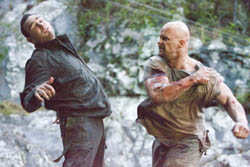 Vinnie Jones and Steve Austin duke it out.

Other than Breckel, Conrad’s primary nemesis in the movie is one of the other competitors, Ewan McStarley (Vinnie Jones). McStarley is unconscionably violent — to the point that he doesn’t just try to kill the others, but he seems to relish the opportunity to torture them first. He’s psychotic and intelligent and that makes him more than a worthy heel opponent for Conrad.

The other eight are fleshed out to lesser degrees; some have ample screen time, while others are just props for the violence. And don’t worry, even the most hardcore of fans will like the brutality quotient in this movie. The violence isn’t cute or cartoonish like some action movies tend to be. It’s unapologetically vicious and nasty — in fact, one scene featuring McStarley’s treatment of another competitor borders on the downright disturbing. Parents of younger wrestling fans who think that they’ll be seeing Austin just portray his wrestling persona complete with “What?” and delivering Stunners should be cautioned — the R-rating of the movie is justified.

As Austin himself has said in interviews, this was deliberate — he wanted to distance himself from his wrestling character with the movie, even removing the “Stone Cold” tag for the marquee billing. His performance reflects that as well, as he is a lot less brash in the movie than what you see on TV. Conrad is given just the right balance between intensity and cool, and Austin even gets a chance to show off his dramatic chops a bit. It’s a toned-down performance from what you typically see, and it’s wholly appropriate for the movie.

In fact, the only real nod to wrestling fans — and not an overt one — is a fight scene between Austin and former WWE wrestler Nathan Jones. Jones doesn’t really have a major role, but does offer Austin a chance for a cool one-liner or two and a great fight scene, one of many in the movie. Not unexpected, I suppose, for a WWE movie. But they are used effectively to advance the plot and strengthen the characters involved.

Which actually surprised me to some degree. Honestly, going in, I figured The Condemned would be not unlike a Vince Russo-booked match — numerous violent high spots but no logical storyline pulling them all together. I’m glad to say that this isn’t the case. Rather, it’s a well-written, intense action movie that should help Austin establish his credibility as a potential leader in the genre. Based on that, I would give The Condemned two middle fingers up.