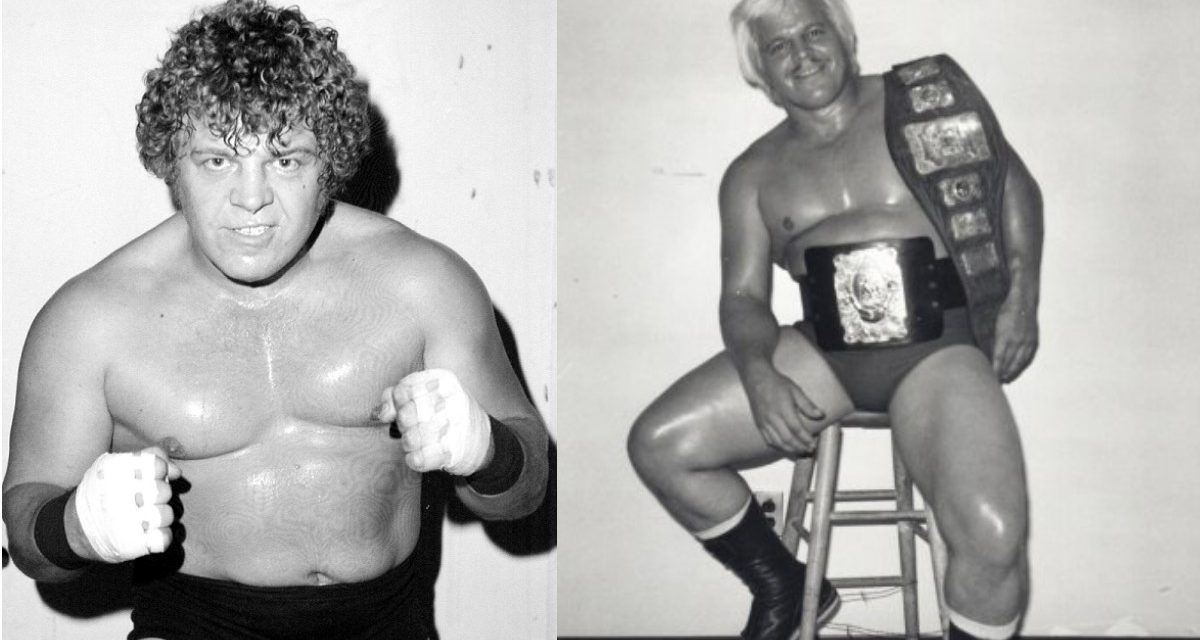 Gil Hayes, a hated villain from the Stampede Wrestling circuit, died on July 28, from a massive heart attack. He was 82.

According to his daughter, Toni Hayes, he died of a massive heart attack while visiting Fort Frances, Ontario. He had gotten into his car in the evening, started it up, suffered the heart attack. Hayes was found in the morning by relatives.

“Miss you pops! My heart aches!!! Can’t believe you are gone,” she posted to Facebook.

Much of his story is detailed in 1999 SlamWrestling.net feature: Gil Hayes on being Gil Hayes.

He was born in Fort Frances, Ontario, on October 20, 1939, and as family lore goes, he was a big baby — 12 pounds — and was fed through a milk bottle with a nipple on it from the start by his mother, Pearl. There were 13 children in the family, living in a one-bedroom house. His brother, James, was accidentally killed at age 10 when he was shot by another brother when they were playing with guns.

Gil Hayes was a wrestling fan, and eventually met Gene Kiniski, who encouraged him to give the sport a try. Hayes debuted in Winnipeg in 1966 as Gabby Hayes, a reference to a famed character actor.

His most famous run came based out of Calgary, where he was referred to as “Mrs. Hayes’s bad boy, Gilbert.” However, he wrestled in many locations, from right across Canada to Japan and Puerto Rico, and throughout the U.S., especially Florida. 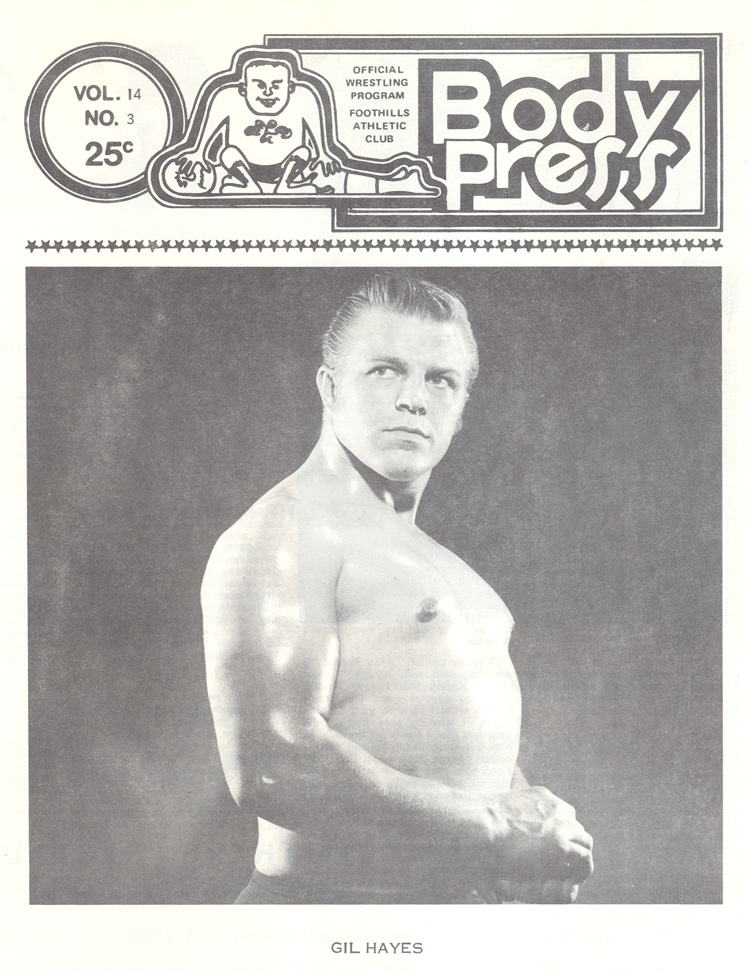 A Stampede program from Edmonton in 1973 with Gil Hayes.

Hayes was a top star in Stampede but the 5-foot-10, 247-pounder was mid-carder for the most part elsewhere, though held titles in Puerto Rico and Hawaii. “I always relied on just my work to get by. I always, always appreciated anybody that put me over, and I’d thank them for it, and I’d be friends with them,” Hayes said in 2011. “I wouldn’t be ashamed be a friend to some jobber in the dressing room, whereas other people who worked on top, they just forgot who put them there, because without the jobbers making them look good, they’re nothing.”

“Gil was a natural, he was an absolute natural. He knew his business,” said his second wife, Shelly Paulson.

It might be best to say that Hayes had a love-hate relationship with Stu Hart and the Hart family. He loved being on top, being pushed, but often felt that he didn’t get the recognition he deserved. Hayes told a story about the late Smith Hart making a mistake while refereeing a match, and getting upset. According to Hayes, Stu later told him, “Gil, blood is thicker than water, and if I want my kids to be chastised, I’ll do the chastising.”

But Stu trusted Hayes to work with a young Bret Hart. Hayes picks up the story:

Bret, at 17, had to do a job on TV in Calgary, and he was in the dressing room, and his face was almost down to his knees. “Oh dear me, I’m one of the Harts, I’ve got to do this, I’ve got to do that.” I looked at him and said, “Bret, you’ve got more talent than any of the other offspring that you call your brothers. You have more talent, so do a job and learn what it’s all about. Eventually you are going to be a good worker, and it’s going to mean something.” The next time I see Bret, he’s already becoming exceptionally well known and the whole bit. He said, “I remember what you told me.” I gave him some decent advice, and he realized that.

Don’t question Hayes’ work ethic. “I got over in a lot of places that I went, and I relied solely on my work to get me over. I didn’t ever brown-nose any, ever, any promoter, because I felt by doing that I am belittling — I have to be — belittling someone else, and I couldn’t bring myself to do that,” said Hayes. “I would vociferously put that to anybody that didn’t belittle those underlings. So I didn’t make all that many friends with the brown-nosers and stuff like that, I didn’t.”

There is no question that Hayes relished being a heel, and launched into a story. Two real young fans had a Crazy Gil Hayes sign at ringside at a TV taping.

I went out and I ripped it out of the kid’s hands, and I got in the kid’s face, and I started snarling and growling, and I ripped the placards up, just to bits, and I went screaming around the ring. The next week we went there, there were 35 people with cards. The next week after that, there were 150 cards in that audience, which literally drove me crazy, and I only spent about five minutes in the ring; I was going around ripping up these placards. This got me over very, very strong. I was involving the audience, the audience was participating. They felt that they had a part in the whole evening’s goings-on.

There are so many things that a heel can do, if they’re done properly. If the heel is overshadowed by the babyface, you never get a good crowd, because you’re sending the crowd home happy. You never want to send the crowd home happy if you want a full house. That’s the feeling that babyfaces get — they want to get themselves over, and in getting themselves over, they make the crowd happy and it keeps the attendance down. It’s just basic, because it’s human nature. No one’s going to come and see you just because they like you. They’re going to see you kick the sh*t out of somebody they don’t like. They don’t like that heel to the extent that they will come and see you kick the shit out of him, hoping that you’ll kick the sh*t out of him. But they are coming to see the heel, not the babyface.

His knees were the main reason that Hayes quit wrestling in 1981. “I quit four times. The fifth time, it finally worked.”

Edmonton became his home, and in 2011, he described life: “Just basically retired and staying out of trouble.”

A hobby grew into a side business, his amazing work with wood.

“Gil Hayes’ artistic side has really surfaced in the past few years, and he’s produced some fascinating ‘wood art’ (my term, for lack of a better one). The designs are all his, executed in many, many different kinds of exotic wood, and the work is incredibly precise,” noted Stampede promoter and photographer Bob Leonard. 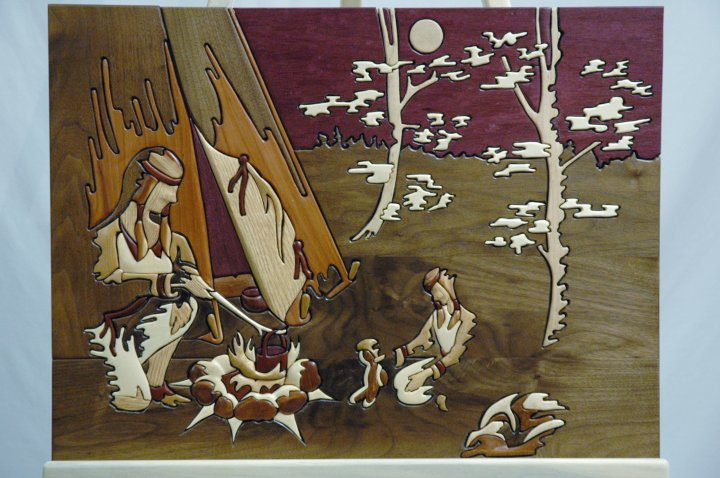 An original Gil Hayes creation from 2010, titled Pale Moon. He noted, “All colors in this piece are individual types of wood.”

Over the years, he shared memories of various people he wrestled with this writer, and was unapologetic about his viewpoints, adding that he had no time for “knob-polishers” and tattletales. Here is an email warning that he called it as it was:

Greg O. I have always been the type of person who has been up front, somewhat opinionated, but always brutally truthful. Anything that I say, you can quote me on. It is at times, hard for certain folks to hear the unwashed truth; not flowery half-truths that the folks get in reference to certain wrestling dynasties that have made up and still make up what the general populace hears.

That is what forms their perception of the wrestling community. If you are open to some conversation that deals in the harsh realities and seedy underbelly of professional wrestling; the type of information that never seems to grace the content of any wrestling compilations I have ever read in the past; I’m okay with that. There have been dreams built around the so-called wrestling icons of the present and past that, should the fans be made aware of the nastiness of the sport, they would very much be disillusioned. Perhaps that is the final chapter to what professional wrestling has become. …

With his first wife, Carol, Gil had two children — Jim and Toni — and they lived in Winnipeg, Calgary, Puerto Rico and Tampa, Florida, at various times.

His second wife was a young fan attending the Stampede Wrestling matches in Edmonton.

“In 1969 when I moved to Edmonton from Edson [Alberta], I was 11 years old and I started getting his autograph,” recalled Shelly Paulson. “Then when I was 18 we ended up together and ran away together and came back and we got married in ’77. We were married seven years, seven months, I was with him eight years.” She recalled getting smartened up to the business while they were on tour in Atlantic Canada for Emile Dupre, having seen frequent opponents Sky Low Low and Little Beaver chumming around.

There were good times, said Paulson, including living in Hawaii, and getting to know the Maivia family and a young kid who would grow up to be Dwayne “The Rock” Johnson.

However, the marriage took a darker turn. “He was a physical,” said Paulson, describing the domestic violence. They divorced, and she continued to see Hayes here and there around Edmonton. 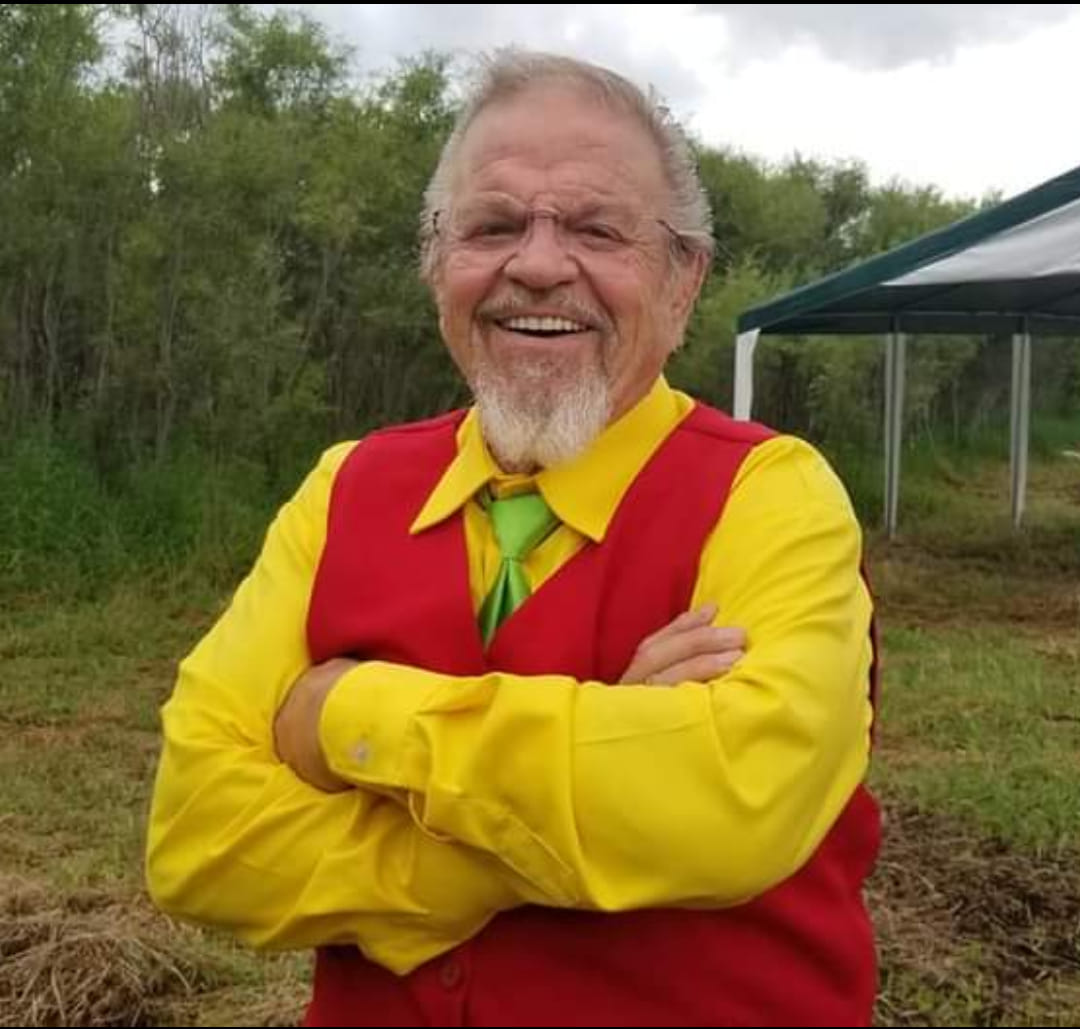 A recent shot of Gil Hayes by his daughter, Toni. Facebook photo

In recent years, Hayes had not been in excellent health. Paulson said she knew she “had to make peace” with her ex-husband, who was nearby 20 years her senior.

Paulson also noted she was probably the last person to get an an autograph from Mrs. Hayes’s bad boy, Gilbert. She had a copy of James McDermott’s The History of the North American heavyweight championship. “Gil signed it, ‘Remembering Gil Hayes.’ I thought, ‘That’s kind of eerie.'”

ADDENDUM, AUGUST 1, FROM TONI HAYES: “We will be having a celebration of life for my dad and my uncle Leonard here next year [in Fort Frances], at that time we will also be having a family reunion, burying of Dad’s ashes beside his brother James and unveiling of his fixed car. As he blew the engine when he had his massive heart attack. Date will be determined at a later date.”

Gil Hayes on being Gil Hayes