Little Beaver might have been the greatest of them all 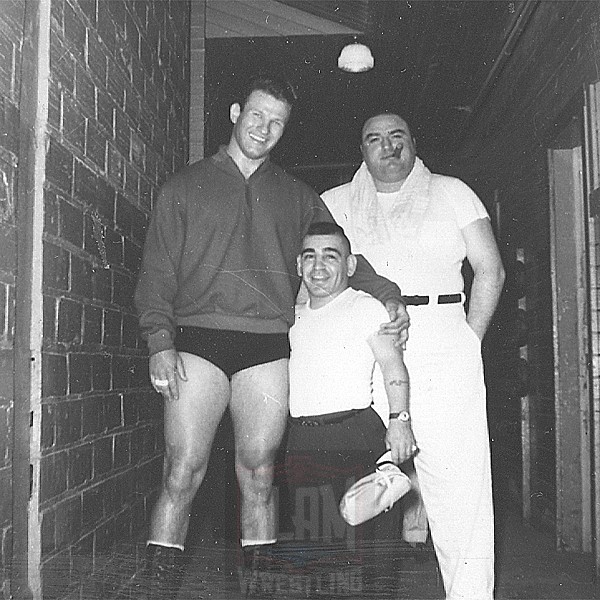 Wally Sieber, who would become Waldo Von Erich, is smiling so big, and Little Beaver appears bigger than many of the midgets, and then there’s Lou Pitosio with that cigar!

One of the greatest midget wrestlers of all time, Little Beaver was an amazing athlete and a comic genius. Wrestling for more than four decades, Little Beaver brought joy to children and adults around the world (and more than a little pain to referees who might be in the way).

His drawing power was such that, when in the ring against real-life good friend Sky Low Low (Maurice Gauthier, also from Quebec), the two midget superstars could command upwards of 15% of the gate. Little Beaver’s last in-ring appearance was at age 52 at 1987’s WrestleMania III at the Silverdome in Pontiac, Michigan where he suffered a legit back injury at the hands of King Kong Bundy. The actual match featured Hillbilly Jim, Little Beaver and Haiti Kid vs. King Kong Bundy, Little Tokyo and Lord Littlebrook, with Hillbilly’s team winning.

He died on December 4, 1995 of chronic emphysema in Saint-Jerome, Quebec.

“With his pomaded mohawk, fringed loincloth and body-length headdress … he was a sight to behold.”
Globe & Mail, Dec. 23, 1995

I remember Little Beaver at WrestleMania 3 when he teamed up with Hillbilly Jim and others to face King Kong Bundy. It was sad to see what Bundy had done to the little guy at the end.
Jason

I remember a match between One Man Gang and Hillbilly Jim at the Boston Garden in the mid-eighties. Little Beaver was working the crowd, helping Hilbilly Jim out, and got a little (pardon the pun) too into the match. The little guy jumped into the ring, and started wailing on the Gang. Poor Little Beaver, no match for the 460-pounder. The Gang picked him up, and gave him a powerslam I’ll never forget. We were speechless as they carried the Beaver out in a stretcher. Only until I saw Little Beaver on WWF TV a couple of weeks later, did I know he was ok.
-EJK

I remember when in 1975, Bob Backlund and Billy Graham were in a match and Little Beaver ran in and started pounding the hell out of Billy Graham because the night before Graham sneaked attacked him during an interview that was the greatest thing he ever did to Graham
Barb & Brian Andrews

I believe Little Beaver was the best midget wrestler of all time. I remember watching him night after night slug away with them iron fists of his. I remember the first time I saw Wrestle Mania 3, I couldn’t believe how skilled he was.
Little Beaver should go down in wrestling history as a great wrestler.
ANDMAY

I remember Little Beaver selling autographed pictures of himself during an outdoor show in New Castle Pa a lady pinched him on the cheek and called him cute He let out an X-rated choice of words that made my grandmother blush.
Dennis Black

I remember Beaver indeed and these are not rose tinted spectacles I visualize his scrawny little frame in. My pocket rocket as someone once referred to this little marvel, words I could not or need not surpass. I too recall the fracas with Bundy, a sprawling mass of flesh, coordinated like a Rhino on a dune buggy. Did he ever think it was fair to challenge our little miniscule stick of dynamite? Hell no. How I recall those halcyon days of Beaver Fever with pride in my heart and what can only be described as a lump in my throat. Thank you dear Beaver for glorious memories, punctuated by endless hours anticipating your next bout. Although we knew victory was indeed unlikely, sometimes even a nonsensical notion, the thrill of seeing you in your fetching attire squaring up to these monstrous buffoons thrilled me deeply. Your memory burns eternally,
Dr Dermot Nugent