Kinji Shibuya, who died Monday at the age of 88, once described his move from wrestling to acting in realistic terms that also applied to his 25 years of villainry in the ring: “You’re an ugly bugger and they wanted an Oriental villain or something like that. I was ready to oblige.”

Of course, the fact that the evil Japanese bad guy was actually born in Utah, raised in California, and starred in football in Hawaii was beside the point. 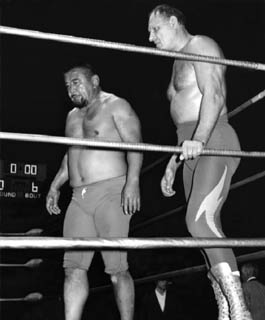 Kinji Shibuya and Killer Kowalski await their next victims.

He looked the part, with his squat body, cropped hair and goatee; the publicity folks could do the rest.

“Kinji Shibuya admits he knows 24 centers on each side of a man’s body where pressure of varying amounts will result in the man losing his grip,” describes a Wrestling World article from May 1954, talking about “The Nerve Specialist.”

A 1971, Reno, Nevada story previewing an upcoming show has local promoter Buddy Traynor fretting about Shibuya’s karate chop. “Sam Muchnick (president of the National Wrestling Alliance) told me,” said Traynor, “that Shibuya is never again to use the karate chop. You know, he once killed an opponent with it.”

In a 1999 interview with the Japanese-English language newspaper Rafu Shimpo, Shibuya said, “the meaner I acted in the ring, the richer I walked out of it. Playing the bad guy was fun. I would have been a run-of-the-mill wrestler without the dirty stuff. As a villain, I became a champion.”

Born May 16, 1921 in Utah, the fourth of five sons to Kinkichi and Kura Shibuya, Robert “Kinji” (or Kenji) Shibuya grew up in Los Angeles, graduating from Belmont High School. He played left guard for the Los Angeles City College team and was named to the Helms Athletic Foundation’s All-Southern California Board of Football’s all-western division jaycee second team star squad in 1940.

At the University of Hawaii, he was a four-year “Hula Bowl” football star and amateur wrestler before playing semi-pro ball for the Honolulu Polar Bears and Honolulu Warriors.

“I was a name before I became a wrestler because of my football background,” Shibuya said in 2004.

The wrestling promoter in Hawaii, Al Karasick, suggested he try the squared circle in 1952.

Speaking both Japanese and English, Shibuya was admittedly typecast as a villain in the years after World War II. 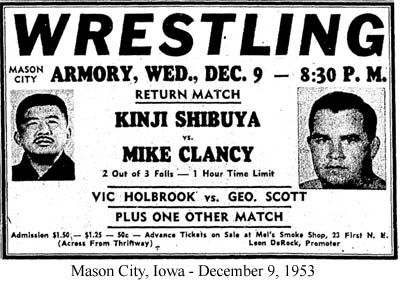 After breaking in, Shibuya hit the road, getting to the Minneapolis territory followed by Calgary.

“When I first got there, I was going towards Alaska! What the hell is this? I was supposed to be going towards Calgary, then it says so many miles to Alaska,” he laughed. “I have a lot of fond memories of Calgary.”

Shibuya also had a lot of success in Vancouver’s All-Star Wrestling promotion.

“I loved Vancouver,” he confessed, adding that he thought All-Star “ran a really good program. They had the influence to get the top guys in there.” 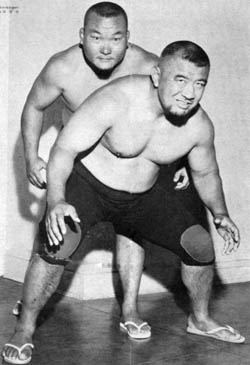 Though Shibuya had numerous tag team title reigns with various partners, he is most associated with Mack “Mitsu” Arakawa.

“I was the senior part of the tag team. We were both from Hawaii. I took him under my wing and we formed a great team,” said Shibuya of Arakawa. “He was big and he was young and at the time, I guess it would have been good for both of us.” Mitsu was originally billed as Kinji’s cousin.

The pairing was indeed good for both of them. They were big draws in many territories including San Francisco, Indianapolis, Vancouver and Australia, and had a run with the Minneapolis version of the NWA tag titles in 1957. They were good friends away from the ring, said Arakawa’s sister Thelma Morifuji. “He was a big island boy too,” she said of Shibuya. “When he came to Hawaii, Kinji always came to our house and visit.” 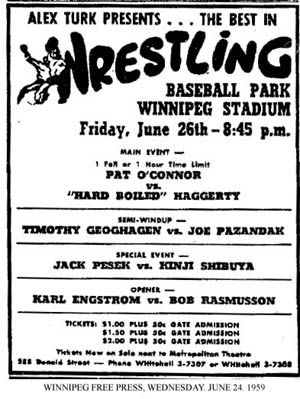 A fun-loving man who enjoyed life and was well-liked away from the ring by his peers, Shibuya shared some stories over the years about his friendships. “I’m a good bullshitter,” Shibuya once told this writer.

He said Ben and Mike Sharpe, the giant brothers from Hamilton, Ontario, liked him because he knew how to cater the diet they’d acquired on numerous trips to Japan. “They had gone to Japan and they learned to eat raw fish. I used to go down in Boston and places like that where you could buy that tuna so inexpensively it was unbelievable. So I’d buy a whole bunch of that. As you know, we had to travel in cars. My wife would prepare that raw fish. Then we’d get the rice bowls and they loved me for that!” he laughed. “They were wonderful guys. They got me out of a lot of bad shapes, bad situations.”

The Australian great Fred Atkins he called a “great beer drinker,” admitting “we tipped a few cases of beer.” On one occasion, Shibuya teamed with Atkins against the famed boxer turned wrestler Primo Carnera. “You know how big he was, size 22 show or something like that. He wrestled Moto and knocked all his teeth out! So when he got in the ring there with me, I said ‘let me get my ass out of here before he knocks my teeth out!'” remembered Shibuya. “Atkins, he’d go there and get Primo Carnera yelling.”

Don Leo Jonathan was a close friend, said Shibuya. “I always treated him like a brother. We were a tag team in Hawaii. We wrestled local guys. The Samoans could throw these connected chairs, three or four chairs in a row. You know how powerful they are. They’d pick them up and throw them at Don Leo, who was standing in the corner … annoyed. So he’d take off after them and chase them out of the building. I’d be in the building by myself. What the fuck is he doing?

“He’s like me, he’s a little boy, never grew up. Dad’s in the wrestling business. You have to be boys because, my God, I would never let my kid go in the business.” 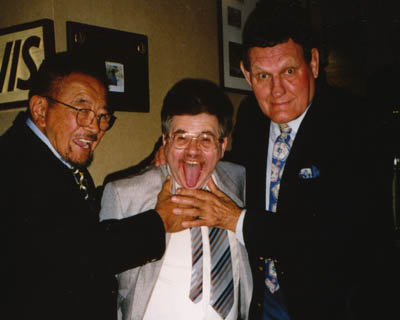 Fellow wrestlers spoke highly of Shibuya’s skills in the ring.

“I remember in 1972 when Kinji Shibuya came in from Northern California and teamed with Masa Saito. How hot they were as a tag team,” wrote Jeff Walton, the Los Angeles announcer and publicist in his book, Richmond 9-5171, A Wrestling Story. “Against Black Gordman and The Great Goliath, the four of them were absolutely incredible. By himself, Shibuya was just a master technician.”

“Kinji was a night off to work with. Great guy,” said Paul Diamond (Paul Lehman). In an interview in the Ring Around the Northwest newsletter, Ricky Hunter spoke highly about Shibuya. “Him and I would get in the ring and we would have fantastic matches. He was one of the great Japanese wrestlers. He was so impressive looking. He spoke very well too.”

One of the late Gene Kiniski’s favourite stories involved Shibuya and the Vancouver announcer Ron Morrier. Shibuya had just broken a rock with a judo chop on television. “So Ron Morrier says to me, ‘You have to admit, that was quite a feat,'” Kiniski started. “I said, ‘Yes, it was just unbelievable. But if you look at the rock very carefully, Ron, you’ll see Made In Japan.’ And Jesus Christ, he just broke up on TV and the people went crazy. Kinji Shibuya was just livid.”

By 1975, Shibuya was pretty well done in the ring.

“I’ve enjoyed pro wrestling throughout the years.” he said in a January 1976 interview in the local Hayward, Calif., paper. “Although people hated me throughout the years. I’ve given them their money’s worth. No matter what people say. they hare to admit I’m one of the best in the showmanship world.”

Based out of Hayward, California, he took some acting roles, including appearances on TV shows such as Kung Fu, and the films Days of a Bawdy Ballad and Hammett. Shibuya appeared in Mr. T and Tina, a short-run sitcom on ABC in 1976, where he played a sumo wrestler named Kazu challenging the star of the show, Pat Morita. He had to shout out his lines in anger and lost his voice by the end of the third day. “I had a ball,” he said at the time. “It was five days of real fun, but it was real, real exhausting.”

“You know it’s a funny thing. Movie actors really liked wrestlers,” Shibuya said, adding that it was thrill to get to know stars such as Yul Brenner, John and David Carradine. “These were all guys that I respected as a kid.”

After wrestling, he started an engine flushing business in Vallejo, Calif., to take sludge out of the engines of corporate and government fleets: Kinji Shibuya’s Internal Engine Cleaning,

In retirement, Shibuya tended to his garden, and collected Japanese koi.

“Whenever I traveled people often gave me koi,” Shibuya explained in a 1974 article about collectors of the Japanese fish. “I’d bring them home in a plastic bag with a little water and some oxygen and give them away to friends. I gave some to a building contractor. One day he came over and built me this pond. He told me to start my own koi collection. That’s how I began.”

“When I see my koi,” he continued. “I think about the friends that gave them to me. That has special meaning.”

Shibuya died of natural causes with his family present on May 3, 2010.

He is survived by his wife of 59 years, Janet, daughter Michele and her fiancé, Jerome Scherer of Danville, Calif., his son Robert Kinji and his wife Michele, and their sons Robert Kinji III and Richard Noboru of Manhattan Beach, Calif. A memorial service will be held in Union City, California on May 16.