So when Van Dam laces up the boots to defend his TNA World Heavyweight Championship against A.J. Styles on Sunday at Sacrifice, he hopes they have the time to “show that we can definitely be the best wrestling match on the card.”

“AJ’s good,” Van Dam told SLAM! Wrestling on Wednesday. “I’m used to having everybody’s best match my whole career. I take everybody’s move’s the best anybody’s ever taken them, I make everybody look better than they’ve ever looked before. AJ’s got a lot to work with. I expect, and there’s a really good chance, that this is going to be the best match of his career and hopefully a match that has everybody taking about TNA.” 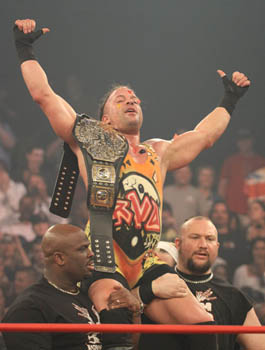 Van Dam is known by many monikers. Whether it be “Mr. Monday Night” or “Mr. Thursday Night” or “The Whole F’n Show,” all place Van Dam in a situation where he has to perform. And there’s no place he’d rather be, either.

“I need the pressure. That’s what makes me tick,” he said. “On my own time, on my own personal time, I have to overload my schedule with projects. I thrive on the pressure. … I have to challenge myself in order to appreciate what I’m doing in order to feel alive and enjoy the moment. I love the fact that I’ve been calling myself ‘The Whole F’n Show’ for almost 15 years now. And the crowd just confirms it every time I look at them and point my thumbs to myself.”

RVD returned to televised wrestling March 8, quickly beating Sting. A little more than a month later on a live edition of Impact, Van Dam beat Jeff Hardy for the chance to wrestle Styles for the championship in the main event. When Van Dam pinned Styles with the Five-Star Frog Splash, it set off a celebration that saw confetti rain down from the ceiling and the locker room empty to celebrate Van Dam’s victory, which ended the second-longest world title reign in TNA history.

“It meant a lot to me to beat AJ Styles for the belt because a lot of people had always wanted to see AJ and I wrestle,” Van Dam said. “Fans acted like that was a dream match. I always felt like that when the match did happen that I’d come out on the winning end of the stick, outclassing, outshining, looking more like The Whole F’n Show. The way the match went down, I feel like [Eric] Bischoff, [Hulk] Hogan and Dixie [Carter], the decision makers feel like I weigh out in the same way.”

To Van Dam, winning the title set off a “new era” in TNA, and he’s still hearing congratulations nearly a month later and is feeling “happy vibes” from everybody.

“The way it went down, winning both matches, getting crowned, if somebody was to write a storyline for their own participation in the show, they couldn’t expect it to come out any grander,” he said.

Holding the TNA World Heavyweight Championship ranks right up there with his near two-year run as ECW Television Champion (which he feels is the one that made him a superstar in the business) because he feels his efforts are “really helping the company,” and him being in the top spot makes more sense than him being in a random spot on the card. 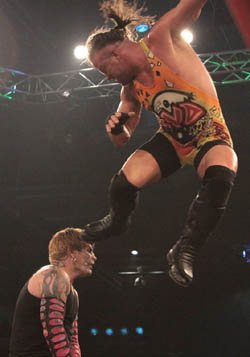 “In WWE, a lot of times friends would come to the show and say, ‘Wow, you get the loudest reaction out of all the wrestlers here, how come you’re not in the main event and how come they don’t have any RVD T-shirts?’ and that’s what I always dealt with before,” Van Dam said. “Now, I feel like I’m in a great position as champ. I have no doubt I’m going to do my part to show the best matches anybody has seen in TNA, so it’s pretty exciting.”

Van Dam has held many titles throughout his career, including the WWE and ECW championships concurrently in WWE after defeating John Cena at One Night Stand 2006, and many of them were nothing more than a nuisance.

“In the past, a lot of times I’d win the belt and I’d almost be upset because it’s something else I had to carry with me when I travel, which is a pain in the ass anyway,” he said. “I pack super-tight, I don’t like to check bags, I like to carry them on and with a belt, that would really f— my system up.”

Starting today, Van Dam will go back to being “Mr. Thursday Night” as TNA’s flagship program “Impact” moves back to its long-time home on Thursday nights on SpikeTV. The move was announced at the beginning of the May 3 live Impact broadcast.

Van Dam said the move is going to be a positive because the company no longer will split its audience not only between Impact and WWE Raw on Monday, but between the first-run show Monday and the company’s own Thursday replay.

“It’s going to allow us to shine and grow,” Van Dam said. “And from what I can see, most of the other boys seem to feel the same way. Dixie told us that this was from listening to polls from the fans and I think probably SpikeTV also wanted it and it really seems like it will be a good thing now. WWE, they own Monday night and that’s not going to change.”

Van Dam, who made his TNA debut on the company’s first two-hour Monday Impact, said the company had to try to the move. He said it the move helped put the company on the map and that Carter did not do it with vanity.

“Dixie never said, ‘Hey, we’re going to beat the hell out of them on Monday nights, we’re going to take over and own it,'” Van Dam said. “She always said, ‘We know we’re going up against a much bigger company, we’re doing this slowly, we’re going to try to win battle-by-battle.’ She always seemed to have everything in perspective. As long as it didn’t put too big of a hole in them financially, I think it was a great move.”

Even though Van Dam will only be making his sixth trip to Orlando for Sunday’s Sacrifice pay-per-view, he has been impressed with what he’s seen from Carter, calling her not only a sweet person, but a real one, as well.

“So far, I love Dixie Carter,” he said. “You actually have a genuine relationship with her. I text her, and she’ll text me right back. And from what I understand from the other guys, she does that, too. … She’s not the wrestling expert, she’s the one who owns it and would like to make her money back and she’s got to trust certain people and listen to the advice of certain people and know who to listen to and that all seems very upfront and right there for everybody to understand.”

Not only is Van Dam finding success professionally — he has a comic book coming out soon and has found success with RVD Radio and RVDTV — he also is personally. Van Dam’s wife Sonya has now been cancer-free for two years.

“This was a major milestone we just passed, having been two years cancer-free,” Van Dam said. “Once you do the operation, the chemo and you get cleared, you’re still in constant fear of it returning with the odds of that lowering as time goes on.”

It’s been an “uplifting” experience to watch Sonya, he said.

“As you can imagine, it’s not a fun thing to go through,” Van Dam said. “For me, personally, I do everything to try to spoil her and just make her happy and its’ been that way our whole life. That’s my goal is to do everything to keep her energy up because that’s what keeps my energy up.”

RVD ON BEING PATIENT
Prior to returning to TNA in March, Rob Van Dam had mostly been off American television. Outside of a few cameo appearances in WWE, Van Dam was absent. Still, the fans he saw would tell him how much the wrestling world needed him.

“The fans have always told me, ‘Go back Rob, we need you back! We need you to go back.’ I used to hear it so much, it was as if the fans thought I could save wrestling,” Van Dam said. “They would tell me how lame the storylines have been, how bad the product is with wrestling in general. Everyone would say, ‘Rob, we need you back,’ and I would say, ‘Look, I’m not going to be able to save it, it’s just going to suck for me, too, if I go back.'”

His long layoff was in part due to the fact that he was looking for the best deal. He found that with TNA, calling it the right deal with the right timing.

“Everything was perfect, so while I’m there of course, I’m hoping to be utilized right,” he said.

Van Dam believes he’s helped add believability to TNA because of his choice.

“I added more credibility to TNA even though their wrestlers want to be there now because they figure I wouldn’t be there unless everything was good because of my decision to turn offered work away for the last three years during a recession just to stay home,” he said. “That gave credibility to the fans and wrestlers alike.”