Matt Hardy is eagre to hit the Canadian Maritimes this weekend and continue his feud with Drew McIntyre.

“I’m especially fond of Halifax — we had a lot of good crowds up there. It’d be nice to actually be able to spend a few days up there and have some pleasure instead of work, but that’s not the case this time.”

Hardy noted he doesn’t get to see most of the cities in which he wrestles, which will be especially true during this tour. 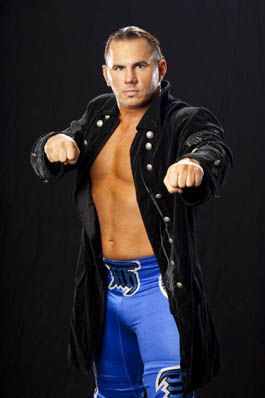 “We’ll fly in tomorrow… Rey Mysterio’s my riding buddy, we’ll likely end up getting a bite to eat, go train, go to the show, grab some food. Then the next day, we have a one o’clock show in Moncton and then a seven o’clock show in St. John. So there probably won’t even be time to train that day. It’s gonna be very busy and hectic while we’re up there.”

Hardy and the rest of the SmackDown roster will also visit Ottawa next week Tuesday for TV tapings. He has been with the brand for nearly a year since being traded there from RAW, and is looking forward to a much more injury-free year than he had in 2009.

“I think SmackDown to me feels more like my home than RAW does,” he said. “I had such a rough year in 2009 injury-wise – my body was really banged up between cumulative injuries and my abdominal tear, which did so much damage to my intestinal tract and my digestive system.”

Hardy said it’s been a process of getting his life and career back to where he feels both need to be: “We’re getting there, slowly but surely.”

With a few years still left on his WWE contract, Hardy said there remain a number of mountains he’d like to climb, including winning the WWE and/or World championships.

Most recently, he’s been embroiled in a feud with Drew McIntyre, which he said is ongoing, in spite of SmackDown General Manager Teddy Long stripping McIntyre of his Intercontinental belt and having him escorted out of the building on last week’s TV.

“The one thing I would definitely say is make sure to tune into SmackDown tonight. A lot of questions are going to be answered… there’ll be some developments that will help you understand what the next phase is in the whole Drew McIntyre story. I can promise you this: the Matt Hardy-Drew McIntyre situation and story are far from being over.”

Hardy is also busy these days mentoring Justin Gabriel on WWE NXT, which he said was fun but also joked it means he has to work twice on Tuesdays.

“Justin Gabriel’s been someone who’s been a great guy to be your student, just because he’s very open… He calls me his sensei, he asks my opinion on everything he does, from whether it’s doing an interview to doing a silly little competition or having a match. I’m very appreciative that he’s so open – it makes him very easy to give suggestions to, and mould him in the way that I think will help him to survive in the WWE world.”

Hardy put Gabriel over as “a really tremendous guy who’s going to have a good future here in the WWE.”

He added the experience has reminded him of his early years when he was finding his way.

“It reminds me of myself and my brother, [Jeff], because I know he can do all of these beautiful moves, but sometimes it’s not about doing a move but where you do a move, or how you do the move, at what point of what match.” 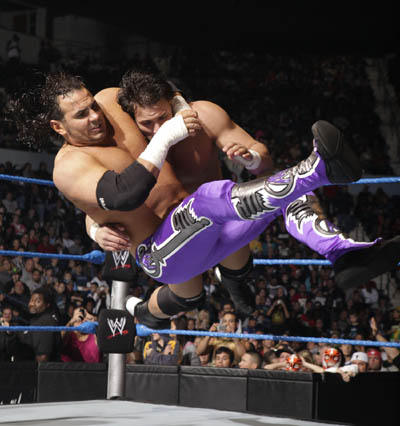 Matt Hardy in action on Smackdown!

Hardy is one of the most active social networkers in WWE, and has been using Twitter and MySpace for a long time. He said that, despite what may have been reported elsewhere, the company doesn’t monitor or vet what he posts.

“A lot of it boils down to common sense – if you have common sense and you know what you’re doing, I think you’ll be okay,” he said. “Both those ways [Twitter and MySpace] I found were nice ways to interact with my fans and with the people who’ve always supported me… It’s been a cool way for me to let them know a little bit more about who the real Matt Hardy is.”

Hardy is also involved with The Hardy Show, a series exclusive on the Web, which helps him keep in touch with Jeff and his old friends Shannon Moore and Gregory Helms.

“We’ll always be close and always remain close,” he said, noting all worked for OMEGA (Organization of Modern Extreme Grappling Arts), a promotion the Hardys started and ran before joining WWE. “And also all worked for WWE, which was all our dream. I’d definitely like to see those guys back again. I definitely wouldn’t rule that out either.”

Hardy said he tries to keep his finger on the wrestling industry’s pulse, and called TNA’s short-lived move to Monday nights a “noble” but ultimately futile move.

“It’s so hard to compete with the WWE juggernaut. RAW is such a well known brand, and the WWE is such an amazingly strong power brand across the world – it’s a global brand – and surely there’s no one that is going to be able to compete with the WWE machine right now or the immediate future,” Hardy said. “But I think competition is good for the business, and it’s good there’s a place to work for guys that aren’t able to work for the WWE at the current time.”

He said no one at TNA has tried to lure him over, and he believed he’d be a WWE lifer.

When he does eventually retire as an active wrestle, he might give thought to again starting his own indy league.

“I think that might be a possibility, down the road, when my days of being actively on the road touring constantly are gone, I could see having a version of my own independent promotion, helping young guys.”