The terms prestigious lawyer and former pro wrestler don’t seem to go hand in hand, but for Jim Vilvang, both apply.

Vilvang, who wrestled in British Columbia under the name Jim Dimitri, never intended for his two careers to converge. It took former All-Star Wrestling host Ron Morrier to connect the dots, often saying of Vilvang, “When he’s not wrestling, he’s a lawyer.” 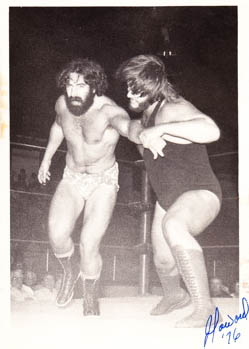 Jim Dimitri, left, is whipped across the ring.

A successful law career has earned him the distinction of Queen’s Counsel, one of the highest honours that can be bestowed upon a Canadian legal practitioner, but it also limited his time in wrestling to being an enhancement talent of the weekend — or in Vilvang’s case weekday — warrior variety.

This, though, made it easy for Vilvang to balance his two professions.

“We’d do Monday night at the [PNE] Gardens and Tuesday night was TV, which in the old days, they used to shoot at the Channel 8 TV studio,” said Vilvang. “Tuesday night they’d shoot matches that were actually shown on the weekend to hype the event for the next Monday. I didn’t always get booked. There were quite a few times I’d only get booked a few times a month. There were a lot of little shows all over the place. If I could do something else on a Friday or Saturday, I would go.”

While his occupational balancing act was a prominent concern, it wasn’t the only thing that kept Vilvang from pursuing the ring wars further.

“It was a lot of fun and I really enjoyed it, but I never had the potential,” said Vilvang. “A lot of those guys were better athletes. I’d always come back and at the time I was young and I’d be going in against guys that seemed like old guys. I’d be saying, ‘Holy moly, how do these guys do it night after night?’ I’d be sore and stuff like that. [I would have pursued wrestling further] if someone said I could be like Hulk Hogan, but I’m not 6’6″ and 300 pounds. I had a pretty limited view of my capabilities. I would have been a jobber for my career.”

Vilvang got his start in wrestling by training with amateur wrestler Bill Persack at the Vancouver YMCA. After nearly two years of going through the basics, he was green-lighted to continue his in-ring education with local grappler Eric Froelich.

“They’d set up the ring before the matches and if the matches started at 7 p.m., we’d go in at 5:30 p.m. and workout for about an hour,” said Vilvang. “Then they’d start you in the small towns, like having the opening match in Nanaimo, where not too many people are going to see you, so if you screw up and look like an idiot, people would forget. You go in the opening match and you learn the trade that way and if you progress, you progress. After a while, if you’re at least half decent, they started to use you in the Gardens and on TV and stuff like that.”

Some of Vilvang’s greatest wrestling memories didn’t come in the ring, but as a commissioner for Stampede Wrestling, during the territory’s heyday in the 1980s.

“That was when Stampede was really, really strong and Bret [Hart] was still there and Davey Boy [Smith] and Dynamite [Kid],” said Vilvang. “They just had some really outstanding cards. Chris Benoit was just starting out. They had a lot of talent and even a lot of the local guys were very talented.”

Vilvang marveled at how well Stampede was operated inside and outside the squared circle.

“The matches were very well done there,” he said. “They tended to go for smaller guys in that territory and more athletic, I think. The Northwest here, was sort of known as a territory for big guys. Those guys were just action packed at the time. They were also much more developed in terms of storyline. Their characters were more developed.

“This is getting a bit technical, but they also kept more of their characters fairly strong. Out here, it was still the philosophy that on TV, the guy that was going into the main event, would squash somebody like me and so everybody would go, ‘Oh, wow, look how he crushed that guy. He’s going to give so-and-so a good fight.’ They’d never give away the good matches on TV. Today, they try to keep most guys reasonably strong. They didn’t do that here, so I must say I liked Calgary in a lot of ways.”

While Vilvang still keeps in touch with some of his former wrestling buddies, he’s quite content to wage his battles in the courtroom, rather than the ring and given the accolades he’s received as a litigator, one would have to conclude he’s made the right choice.

Daniel Wilson’s girlfriend is also a lawyer in B.C., meaning this is one of the few times she has been interested in his work.