CHARLOTTE — Jim Cornette — backed by a legion of fans — shouted down members of the Insane Clown Posse’s posse at the Mid-Atlantic wrestling reunion early Sunday morning. Former referee Tommy Young unknowingly handed the mike to a posse member during a question-and-answer session with Cornette.

The volatile manager, asked why he hated the rap/wrestling entourage, leaped out of his chair and denounced the group with a string of epithets and put-downs. “There’s no such thing as rap music,” Cornette insisted to cheers. “Rap is noise that no one wants to particularly hear which is why you boys have to pick up those little outlaw bookings for $25 a shot.” 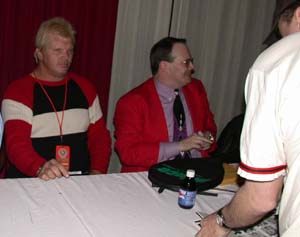 He dismissed Rude Boy, the Insane Clown Posse’s merchandise man and a friend of his, with another series of expletives. Before things became more heated, promoter Greg Price escorted the members out of the session as the audience directed a chorus of “Na Na Hey Hey Kiss Him Goodbye” at them.