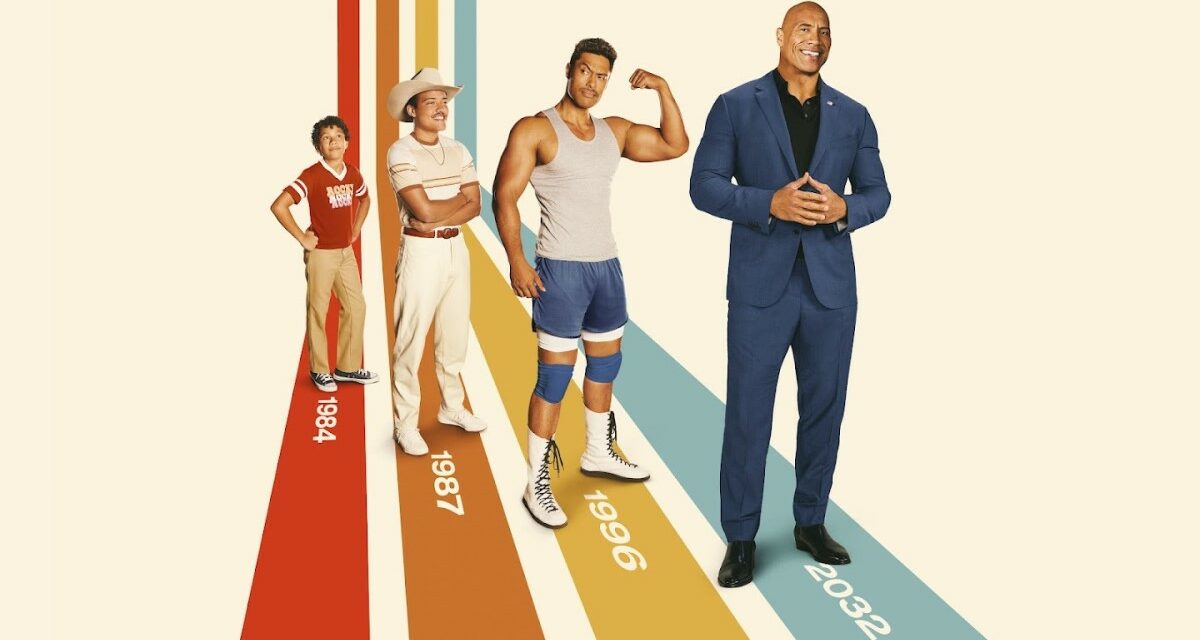 The twisting, turning tales of Dwayne Johnson’s most formative years reach another season finale in tonight’s double-bill, two episode conclusion: “You Gotta Get Down to Get Up”, and “Let the People Decide.” With a third season already confirmed, it’s intriguing to see exactly where each era leaves off — and, of course, we finally reach the end of the fictitious campaign in Johnson’s quest to become president of The United States in 2032.

Following the format of the first season, the opening and closing episodes give time to each of the Johnson’s timelines: with Adrian Groulx playing young Dewey in 1985, Bradley Constant playing him in his Nashville teens in 1987, and Uli Latukefu embodying Johnson’s early wrestling personas Flex Kavana & Rocky Maivia in 1996. Backing up a step, though, part one of the finale is fully committed to 1996, and Latukefu steals the show in a way that might make you wonder why The Rock wasn’t a huge success from the very beginning. Well, we know why, but we’ll get to that in a bit.

Johnson is in Memphis, living with Bruno Lauer and hoping to get the call up to the WWF. Before coming up with the name “Flex Kavana”, Dwayne hears a list of suggestions from his father Rocky (played by Joseph Lee Anderson), his mother Ata (Stacey Leilua), and his grandmother Lia (Ana Tuisila). Rocky, for his part, is in favour of anything featuring “Rocky” in it, but it’s Ata who suggests Rocky Maivia is the way to go. That, of course, will have to wait.

At first, Flex Kavana is teaming with a young Brian Christopher in the USWA, under the watchful eye of the latter’s father Jerry Lawler. While some of Johnson’s promos fall flat, that feeling of watching a superstar in the making, as Johnson chews up the scenery with his trademark swagger on the mic … well, that’s a bit of a cheat. It wasn’t until much later on that The Rock’s mannerisms and mic work truly took off, whereas he was originally packaged as a respectful, soft-spoken young man.

We do see the beginnings of Johnson’s desire to become a great talker as Lauer (played by Ryan Pinkston) educates him by playing audio clips of Don Muraco, Dusty Rhodes, and Ric Flair in the car in between shows. This is right after watching the 1996 King of the Ring coronation when Steve Austin coined “Austin 3:16” and spawned a million t-shirts. By the way, in a previous review I had written how wrestler/actor Luke Hawx had the sound but not quite the look of Austin — it must have had something to do with matching The Ringmaster gimmick as opposed to Stone Cold, because Hawx’s rendition of the iconic speech is uncanny in every way.

The show plays around a bit with the “real versus scripted” duality of the world of pro wrestling — because, really, how often do we know to a certainty what the truth in wrestling is? — as Johnson fears his improving mic work has angered the head booker of the USWA, and figures he’s been put into a “Loser Leaves Town” match against Jerry Lawler as punishment. Well, it’s not that: it turns out that Johnson has received the call from the WWF and is on his way to Connecticut for a second meeting with Vince McMahon, and Lawler’s job is to send him out in style. As Johnson is beaten from pillar to post, he finds time to thank all of the ring and production crew members he can.

As we await Johnson’s WWF debut, the first part of the finale ends with Forrest Whitaker, Dwayne’s best friend as introduced in last week’s episode, bringing Dwayne and Julian (played by Sean Astin), his nemesis dating back to the sixth grade, together for them to patch things up and aid in the presidential bid. This segment extends into the beginning of the next episode and, as has been the case for the run of the series thus far, the 2032 bits are hit-and-miss whereas the flashback storytelling is always stronger. Tonight’s unfortunately, was more miss than hit. Ultimately, the season-long feud between Dwayne and Julian is tidied up with a quick face-to-face chat and an acknowledgement that they have more in common than they’d like to admit.

The show then enters its “quick-hit” mode, delivering short cuts from the three timelines to reach a conclusion (or at least a decent cliffhanger) before breaking off for a few months. In 1985, the oft-referenced Saudi Arabia problem between Rocky and Vince McMahon is finally fully revealed: Rocky has accepted some bookings there and is caught in a pickle when McMahon calls and asks him to headline his own tour of the country. Rocky figures he can get away with the double-booking, but when McMahon arrives and sees a big billboard advertising Rocky for another promotion, that’s the end of the road for the Soulman in the WWF. Interestingly, this visit back to 1985 doesn’t have much to do with young Dewey Johnson at all (save for how he’s juggling four girlfriends at once).

In 1987 Nashville, Dewey is feeling good and finding his footing, only to arrive home and learn that the family is moving again. Rocky says that Lawler is cutting him, so they’re off to Bethlehem, Pennsylvania. Shaken and upset, Dwayne is tasked by Bruno to go and placate the visiting Fabulous Moolah who is refusing to perform in her match that night. Moolah, it turns out, is missing her prized jacket, but Johnson isn’t in the mood to listen to her complain about something he considers so trivial. As he expresses all of his frustration about being plucked up and moved again, Moolah lets him know that she didn’t end up where she expected to be at all — and she wouldn’t change a thing. The show makes a little time for some of its recurring wrestling characters in Randy Savage (Kevin Makely), André the Giant (Matt Willig), and The Iron Sheik (Brett Azar), as they express the same faith that life was going to take them where they were meant to be.

With that, Moolah wears Dewey’s jacket to the ring and he returns home to help pack up for Pennsylvania.

Finally, we end up in 1996 in Madison Square Garden where Rocky Maivia, much-hyped leading up to this event, is making his WWF debut. Most of the characters from the elimination match he wrestled in are represented: Marc Mero, The Stalker (Barry Windham in camo pants and a WWF merch shirt), Crush, and Hunter Hearst Helmsley. Strangely, neither Jake Roberts nor Jerry Lawler, already represented in the series, appear in the ring at all. Maivia finishes off Goldust with his shoulderbreaker of doom, going over as the sole survivor in his first WWF match. His family and girlfriend Dany are elated backstage, but things aren’t exactly going to go his way from here.

Featuring clips of taking the Intercontinental Championship from Helmsley and defeating The Sultan (his cousin, better known later as Rikishi) at WrestleMania 13 with an after-the-bell assist from Rocky, we see Dwayne enduring the beginnings of the “Rocky Sucks” era. In truth, the crowd at both of these events were not nearly as anti-Rocky as the show made them out to be, but in the interests of compressing time in storytelling there’s no question that the fans did eventually fully turn on the blue-chipper.

That means that the heel turn into “The Rock” is likely to kick off season three for Latukefu (anyone else curious how they’ll be presenting The Nation of Domination on prime-time NBC?), while Groulx’s and Constant’s next steps in the show’s timeline are less obvious as they’ll presumably deal more with Johnson’s private life. Rocky Johnson’s wrestling career story seems to have been tied up by this point, too, so that would be a large chunk of the show off the table.

And as for 2032 Dwayne Johnson? Well, since it’s about the only part of the show where you really don’t know what’s coming, I’ll simply say that the conclusion is abrupt and felt tacked-on, bringing into question all the time that’s been put into it throughout the two seasons thus far. How the 2032 part of the series will open in season three is wide open for speculation.

Young Rock is a very dependable show for NBC, and it wasn’t surprising to hear that it will continue. The cast and crew did a tremendous job of maintaining stylistic production values between the first and second seasons, and that means if you liked what you’ve seen so far you’re almost certainly going to get more of the same. While you wait for new episodes, check out our Young Rock review and interview archive, and all things Dwayne Johnson, through the links below. Stay tuned as always to SlamWrestling.net, too, for updates on the show during the off-season!