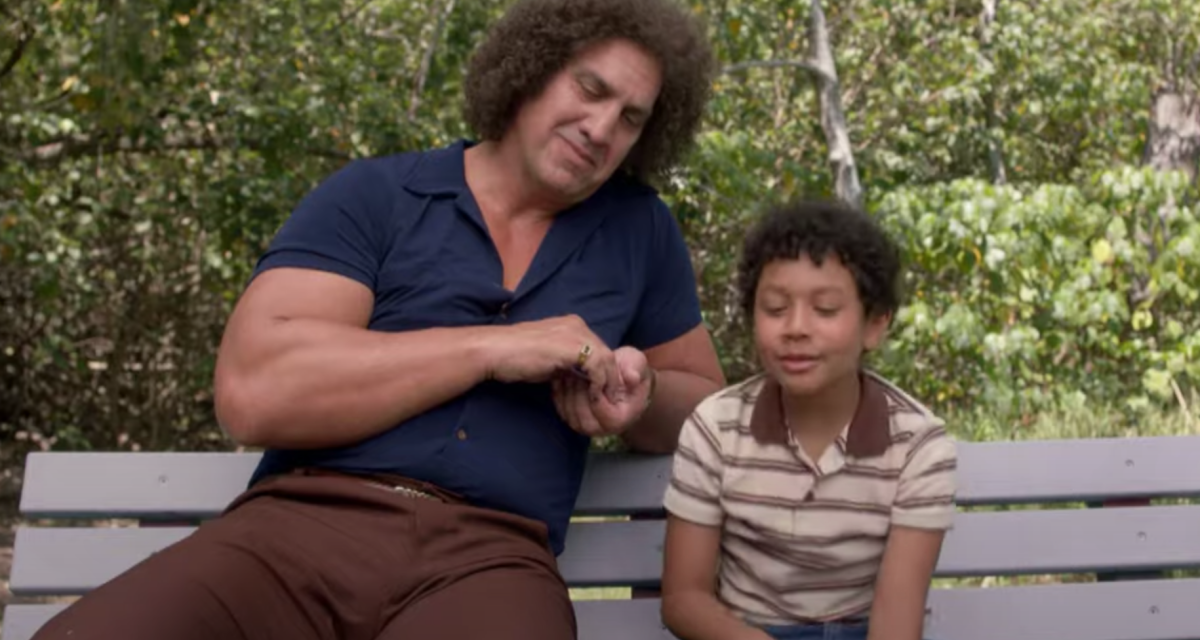 Dwayne Johnson has claimed the mantle of Hollywood movie star number one, and he was no slouch in the wrestling ring, either. However, in a world populated by big men, there was only one André the Giant, who himself could lay claim to the title of most recognizable athlete in his heyday.

As Johnson’s somewhat navel-gazing TV series Young Rock is set to to premiere tonight, February 16th at 8:00 pm EST on NBC, taking the viewer back to Johnson’s youth and following him to superstardom, a big part of the appeal for wrestling fans is that the show is set to feature a number of luminaries from wrestling’s past.

The premiere episode, titled “Working the Gimmick,” is no exception, and André will make his presence felt. The search for someone to embody that presence ended with the casting of Matthew Willig. He spoke with SlamWrestling.net about his preparation for the role, how his football career influences his approach to acting, and why he missed the wrestling boom in the 1980s and never really became a fan.

Willig stands tall at 6’7″, but even that puts him below André’s billed height of 7’4″. It probably puts him close to André’s actual height, but wrestling, of course, doesn’t treat its biographical statistics in quite the same way as the NFL does. Towards the end of 14 years with a few teams as an offensive tackle, most notably with the Super Bowl champs St. Louis Rams in 1999, Willig began exploring putting his natural sense of showmanship into appearing in commercials, with an eye on getting into broadcasting.

Instead, he turned to acting and has made a name for himself in film and on TV, with a roll call of heavy hitting titles like Concussion, We’re the Millers, NCIS, and Marvel’s Agents of S.H.I.E.L.D.

Looking back, Willig is very cognizant of how good fortune played a part in a fairly seamless transition from one career to the next. “I retired in 2005, and my first commercial aired in about 2000,” he begins. “I was able to do small commercials and things like that, so I started having a lot of success right away. Someone suggested to me about going into the acting world, and I knew an agent who had dealt with a lot of ex-athletes.”

Getting into the acting world meant getting his feet wet with roles such as “Famous Athlete” on TV in The West Wing, and “Jock Guy” in the Rob Schneider/David Spade film The Benchwarmers. Willig didn’t mind one bit starting out again at the bottom of a totem pole after already finding success on the field. “I like to say it’s a really long ladder, and I’m taking baby steps all the way up,” he offers as a motto.

He also admits to having a bit of a chip on his shoulder when it comes to breaking the image of an athlete trying to act, and posts another mantra on his Twitter bio that speaks of his love of both acting and exceeding expectations. “I was undrafted [by the NFL] in college,” he offers as background for what drives him. “I wasn’t supposed to make it, and nobody expects you to. That’s always been the way that I’ve lived, and it kept me going when I was trying to keep playing and make teams, and it certainly was for working as an actor.”

Keeping on the topic of expectations, Willig is well aware of those carried with portraying perhaps the most famous big man in all of pro wrestling. Although, as mentioned earlier, Willig’s memories of André come from a general awareness, not from watching wrestling. It turns out there’s a very pragmatic reason why he never got into it.

“I’m one of six boys, and growing up we didn’t have a lot of television to watch,” he recalls. “I was the fifth of sixth, so I rarely got to watch what I wanted to. It’s kind of interesting that (wrestling) was in my wheelhouse as far as my age, and I have several buddies that were into it, but I never really was one of those guys.”

Willig sizes up his co-star Adrian Groulx in Young Rock.

So now, what did Willig learn about wrestling on the fly while shooting Young Rock? “Well, number one, wrestling is a lot harder than it looks!” Willig readily admits. “I mean, obviously I knew these guys were athletes, but when I was doing some bounces off the ropes I had the biggest black and blue mark on my ass and on my back just from hitting the ropes wrong. So, I just have an infinite amount of respect for the business and the athletic abilities of these guys.”

One part of the wrestling business that felt very familiar to Willig was what he refers to as the camaraderie of the wrestlers. “We had Chavo Guerrero (Jr., who filled a similar role for Netflix’s GLOW series) as our coordinator for the wrestling,” he explains. “And having him tell some great stories, be a leader of our team, that leads back to playing ball and understanding the team concept. Even though we’re fighting each other, we are pretty much a team and we all have to look out for each other.”

Willig sheds a little light (not much, though, bound as he is to keep things kayfabe, so to speak) on what his exploits in the ring as André will look like. Not surprisingly, considering the Giant’s penchant for dominating Battle Royal matches, Willig gets to live in his boots in that very experience. “There were 25 guys in the ring, and to be honest, we only had about a week or so, maybe two, to learn,” he says, referring to the planning and choreography of the match.

“We had one specific day to shoot,” Willig continues. “We started in the morning and went for five or six hours, and went through it somewhat flawlessly. I even had one of the assistant directors come up to me and he said ‘I’ll never forget that day and what you guys did.’ No one got hurt, it looked amazing, and they were just so proud of what we had done.”

Again, Willig won’t play all of his cards right now as to what to expect from his in-ring performance, but he admits to taking a moment to appreciate playing something of a super-hero character in the Giant. “There are a couple of things that André was known for,” he says. “Everybody comes in at the beginning of the fight and goes after André, and he sort of rises up and everybody gets thrown about the ring.”

“It was humbling, it really was,” Willig says of the opportunity to act out those types of moments. “I don’t take lightly this role, I don’t take lightly what it means to people in the wrestling community. One of the biggest things I did for this role was that I gained about 35 pounds, which at my age, for a fifty-year-old guy, it was not easy. I really needed that feel of being as big as I could.”

Beyond bringing the physical component of the character to life, Willig was surprised and touched to learn about the connection between young Dwayne Johnson and André, and was thrilled to be able to help bring such a unique friendship to the screen. “I had to ask Dwayne specifically, ‘Hey, before I start this, I want to know what the relationship was,’ and he very eloquently described his relationship with ‘Uncle André’ as he called him,” Willig details. “I made it a point to build that relationship with the actor who plays 10-year-old Dwayne Johnson, a great kid, Adrian. One of the episodes we have is called ‘My day with André,’ and it’s a day that little Dewey and André go off and have these teaching moments.”

At 5, I never knew why people got so excited to see him.. to me he was just “Uncle Andre”;) #MissU #TBT pic.twitter.com/ZSd6XigPHc

Willig also purposefully aimed to make connections with his peers: the actors playing the other legendary wrestlers. “There were six or seven of us that ate together and drank together, and we had some really cool moments,” he says. “I think that kind of stuff shows up, and it goes back to being a team sport guy.”

So as a team sport guy, who had already found himself at the top of the world as a Super Bowl champion, Willig continues to search for the type of roles and productions that give him more than just a paycheck, although he makes it clear that he never loses appreciation for finding the work itself. “I’m struck by the fact that I’ve chosen 1 percent-type careers,” he says with a chuckle. 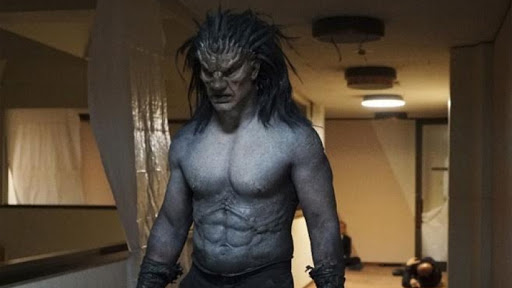 “You know, this business is so crazy that some really talented people don’t have these opportunities. I saw many, many talented guys (in football) who didn’t make it or play as long as I did. To be able to sit in four hours of make-up and transition myself into Lash, there were moments of ‘Holy shit, I’m part of the Marvel Universe!’ It hasn’t been easy, and I haven’t made millions of dollars where I’m just sitting back and laughing. At the end of the day I really do appreciate what I’ve been given.”

With his hopeful sights already set on a second season for Young Rock, Willig is ready to keep climbing that ladder, perhaps now one giant step at a time.

Be sure to check back for Slam Wrestling’s weekly review of Young Rock, plus interviews with more of the actors portraying these historic roles.