RAW: Sheamus backs up his boast, runs the gauntlet 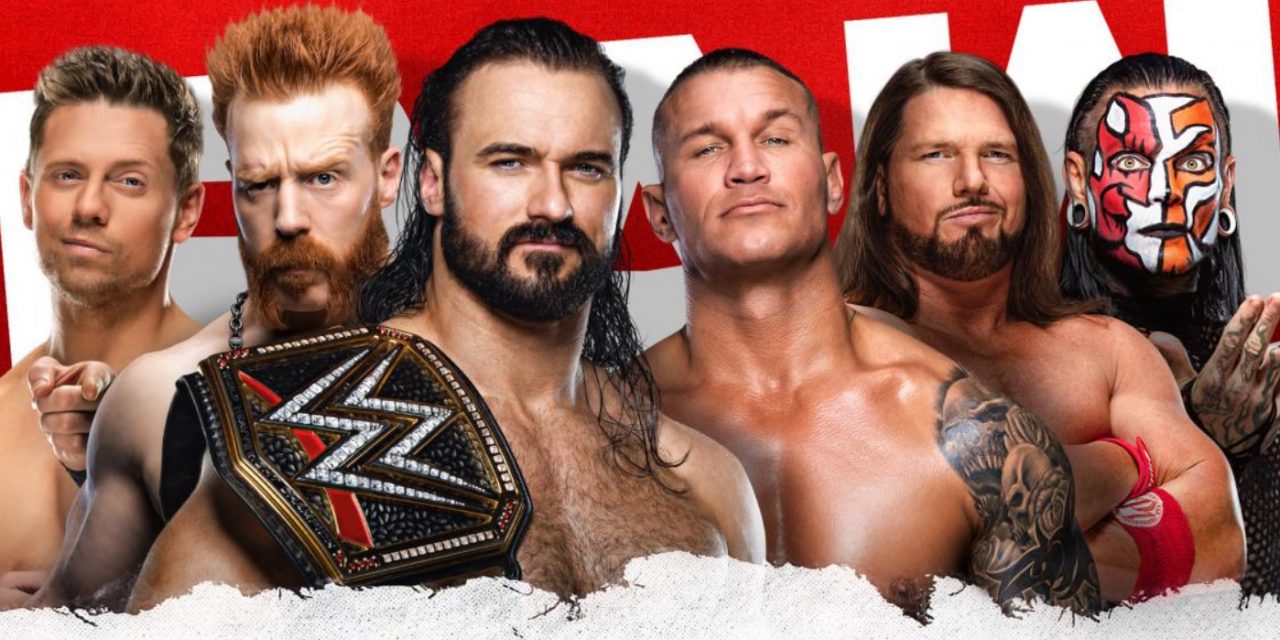 What do you do when you haven’t watched Raw live in months but have to recap it for a friend? Dive right in, of course. At least I know what’s in store this evening from the ThunderDome: a gauntlet match to determine who will enter the Elimination Chamber in the final spot. Not quite as coveted as being entrant No. 30 in the Royal Rumble, but it’s something. Dale will be back next Monday, but you’re stuck with me this week as we head live to USA for the final Raw ahead of Sunday’s event.

One of the six men about to run the gauntlet is out first tonight to host the segment that bears his name, Miz TV. His guest is the man holding the gold that’s up for grabs inside the Chamber, Drew McIntyre. Despite big wins over the likes of Brock Lesnar, Goldberg and Seth Rollins, Miz says facing five former champs in one match will make for the toughest night of his career. He’s also not above twisting the knife a bit about McIntyre’s betrayal at the hands of longtime friend Sheamus. Unable to get a word in edgewise, the champ finally has enough and headbutts the host, shaking his head on the ramp as he heads for the back. Undaunted, Miz calls himself a master strategist because … I guess he’s the first person ever to make people wonder if he’s going to cash in the Money in the Bank briefcase at a certain time? Miz, that’s literally what every single person to hold the case does. Well, maybe not Otis. The real interesting part comes at the end, when he removes himself from the Elimination Chamber match itself, clearing his schedule to strike if he chooses.

Riddle and LHP have an interesting discussion about their favorite presidents. I’d say Riddle’s should be whichever one can determine what happened to his first name. After Gran Metalik absorbs a whole bunch of punishment, Riddle is able to rally the troops and get the win, which could bode well for his chances against Bobby Lashley this weekend. Or maybe not, as Lashley attacks him (and Lucha House Party) after the bell and leaves him looking up at the lights.

Miz tells Adam Pearce that he wants someone deserving to take his spot, and that someone is a young up-and-comer named John Morrison. Pearce says he’ll take it into consideration but his expression as Miz leaves says maybe not too long.

Hey, Bad Bunny is still involved with WWE storylines? I dig it, but wish he was aligned with someone more interesting than Damian Priest. Also, Bad Bunny is now a WWE champion, winning the 24/7 belt with Priest’s assistance. That should drive the haters even more insane.

Elsewhere, the New Day takes exception to Miz’s suggestion to insert Morrison into the Elimination Chamber, pointing out that Kofi Kingston is also a former champion. Miz’s argument that Morrison is former ECW Champion is actually pretty funny. Pearce has a good idea for settling the dispute: Kingston vs. Miz tonight, with Kofi getting the spot if he wins and Morrison claiming it if Miz is victorious. There’s also a bit of fun at the expense of Mix’s sequels to The Marine, all well-deserved.

A video package explores the Elimination Chamber. Maybe it would just be easier to semi-quote early career Kanye West and say, “If this is your first time seeing this, you are about to experience something so cold, man.”

Charlotte Flair and Asuka vs. Lacey Evans and Peyton Royce

This one takes a while to get started as Evans cuts a promo on both Flair and Asuka before the opening bell, ensuring that we got only one match in the first hour of the show. This bout has a special mid-match surprise, though with Evans saying her foes won’t lay a hand on her because … she’s pregnant. I hope this angle isn’t going where it appears, but the way Ric Flair is celebrating, you can draw your own conclusions.

Winners: Charlotte Flair and Asuka by countout (I think?)

Charly Caruso interviews Sheamus, who not only believes he’s going to win the Elimination Chamber match, he doesn’t even think McIntyre is going to be around by the end of it. Harsh!

For some reason, WWE decides it wants to show the Lacey Evans pregnancy announcement again. I’m not checking Twitter right now but I imagine that segment is being ripped to shreds right now.

Miz is firmly in control early on, looking for all the word like he’s going to get exactly what he wants at Elimination Chamber. But let’s be real: Kofi would be a lot more intriguing as a last-minute entrant, wouldn’t he? Apparently the bookers agree, because after a back and forth middle segment, Kingston is able to get the pinfall. He’ll also have to wrestle in tonight’s main event now too, but something tells me he won’t mind.

Lana gets interviewed about how she pulled off her table match upset of Nia Jax last week. She gives credit to Naomi for having her back and the duo make Nia the butt of a few more “hole” jokes. No pun intended, heh.

Coming to us live from his dimly lit room du jour, Randy Orton says he’ll do whatever it takes to win the gauntlet match and the Elimination Chamber match, solving problems like he always does. Uh, Randy? About that Fiend problem you think you solved? Alex Bliss is talking about him being reborn, and she’s got a pentagram and everything.

A question to ponder while we wait and see if Lana can pull off another unlikely upset: If small joint manipulation is so painful and effective (and to be fair, it really does look like it hurts), why do only Baszler and Pete Dunne do it on a regular basis? Shouldn’t every heel be trying to snap fingers? I know the answer is “wrestling logic, my dude,” but still. There’s no storybook ending for Lana tonight, alas, as she is forced to tap out.

Braun Strowman asks Pearce why he isn’t in the Elimination Chamber match, and the answer is that he isn’t a former WWE Champion. Pearce also insists he is only the messenger, so Strowman sends a message back for his boss: Make this right or it’s not going to be pretty around here.

AJ Styles vs. Kofi Kingston vs. Drew McIntyre vs. – Gauntlet Match to Determine Who Enters Last at Elimination Chamber

My happiness at WWE giving the whole third hour of the show to this match fades somewhat when the first few minutes are wasted on AJ cutting a promo on Kofi that drags. Also, poor Xavier Woods gets decimated by Omos on the outside, though at least that earns him an ejection from ringside. He shan’t be missed. Styles backs up his pre-match bravado, though, by pinning Kingston with a Phenomenal Forearm. Styles isn’t thrilled to see the champ come down the ramp next, and likely even less pumped about getting tossed around the ring. Naturally, AJ fights back, causing the announcers to remind us there are still three men yet to compete in this one. Despite getting the Calf Crusher locked in for a spell, Styles gets his lights turned out by a Claymore. Jeff Hardy, you’re up. Much of the narrative as these two men battle is about Hardy as a wild card in the Chamber while McIntyre faces the most pressure he’s had in his title reign to date. Hardy eventually gets his serving of Claymore as well, putting him down for three. No time to rest for Drew as Orton is next. Except he might have his hands full as every screen in the ThunderDome is suddenly filled with laughing images of Bliss, stunning Orton so much that he gets counted out (and eats a Claymore as he tries to enter the ring after the ref has already made his ruling). Fittingly, that makes Sheamus the final challenger, and he wastes no time taking it to his former pal. McIntyre weathers the storm and goes for a Claymore, but Sheamus dodges it and connects with the Brogue Kick. He pins McIntyre and wins the right to enter the Elimination Chamber last, for whatever it’s worth.

Excited by his victory, Sheamus taunts McIntyre by calling himself the odds-on favorite for Sunday. Eh, not 100% sure about that. But hey, at least it turns out that Raw wasn’t really all that hard to follow even after some time away. Enjoy Elimination Chamber, and Dale will see you back here in seven!

I was fully prepared to dock the show a half-star for the pregnancy bit, but it won me back with the gauntlet match. Raw did little to erase the memories I have of it being long and poorly paced, but this wasn’t a bad final installment before Elimination Chamber.