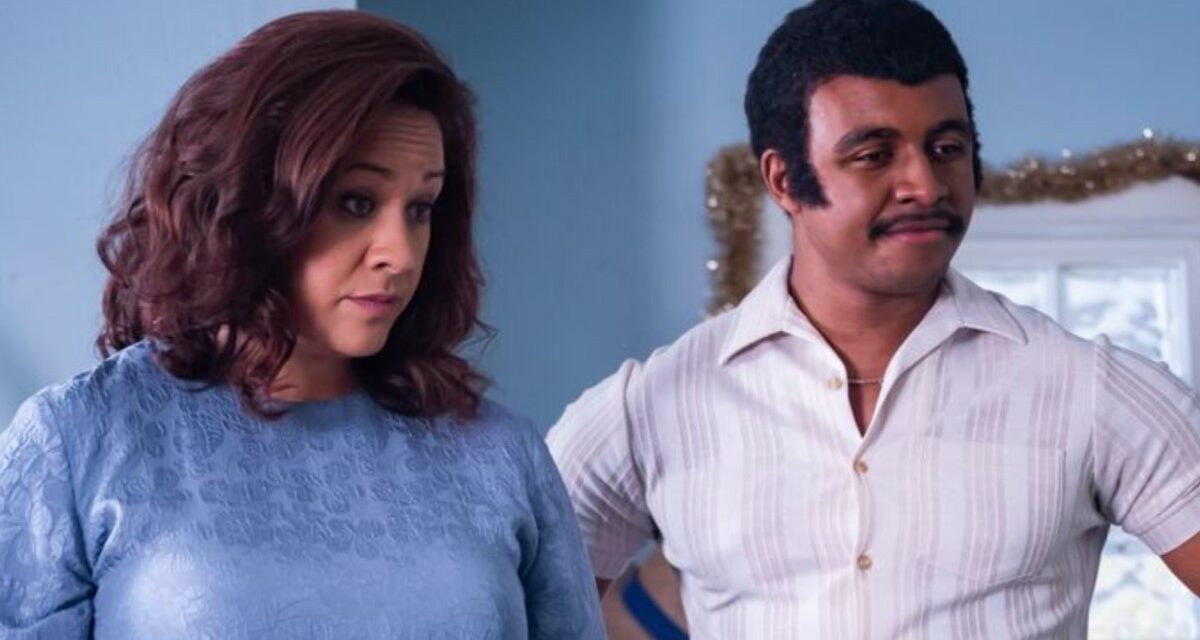 Tonight’s episode of Young Rock promises a trip down a very particular memory lane, as Dwayne Johnson takes his final steps towards getting in the ring and eventually becoming The Rock. As he finds his path to success, however, his parents Rocky and Ata Johnson are not on a parallel path as their eventually irreconcilable relationship problems are becoming more prominent.

Tasked with presenting this troubled marriage on screen is the pairing of Joseph Lee Anderson and Stacey Leilua. At a recent online Young Rock media day, SlamWrestling.net was able to speak with the two of them, and, thankfully, they were anything but a bickering couple as they discussed playing the real life couple, what the production of the second season was like, and the hopes they have for the future of the show.

“You’ll see a bit of that starting to come through the season,” Leilua begins, in reference to the troubles between Rocky and Ata. “(The show’s) not shy to come out and speak the truth about these things; it puts it all out there but it just does it in a way that handles it with a kind of respect, and also fits into the framework of a family comedy.”

Anderson adds on to Leilua’s point, acknowledging the balance that they both strive for in presenting all the aspects of the Johnsons’ story. “I’ve got to give all credit to our amazing directors and writers,” he offers. “With me, I take all I know about Rocky, but then I might give them a little bit of my dad or I might give him a little bit of my uncle. I find everyday things to make this all work, because at the end of the day this is a comedy and funny wins, but you still want to stay true to the person and the person’s family that you’re portraying.”

“That’s the same with me,” Leilua concurs. “I think about my Samoan grandmother; my grandfather was a boxer and he travelled a lot and that was my grandma holding it down at home. So I think about those kinds of things, and I think about the conversations that I’ve had with Ata.”

This aspect of playing the characters in Young Rock for a kind of Venn diagram that touches biographical accuracy, entertainment, and freedom for artistic expression is a challenge that comes up every time in discussion with actors from the show. “It’s really just being mindful, honoring these real people and their story and things that they went through,” Leilua continues. “It’s like putting pieces of a puzzle together; sometimes it happens on the day when we’re filming. Like Joseph said, at the end of the day, we’ve got an incredible showrunner who can be watching us and go ‘Actually guys, can we try this,’ so the support is always here as well, which is really nice.”

For Anderson, one of the most revealing parts of the show is how it likely subverts the expectations that the average viewer may see in the super-successful Dwayne Johnson: that everything comes to him easily. “You probably think that he’s always had it good,” he suggests. “But then when you see his story, you wouldn’t expect that he literally started from nothing and it’s always been up and down, up and down. So it definitely gives people hope; I feel his story is definitely one of hope.”

Leilua follows on this idea of hope by detailing how she was surprised by all of the stories from Johnson’s life that seemed made up, but that she learned were true (or at least true enough as they appear in the show). “The majority of it is very true to his life story,” she suggests. “And I think that’s important because we see Dwayne in his life and where he’s at now, but to be able to shine a light on the very humble beginnings and everything from sports injuries, to mental health, poverty, crime – there’s just so much in there.

“I think putting that stuff out there is a brave thing to do,” Leilua continues. “There’s so much on there that people can relate to. And so I think it’s a show that really gives hope to people who might be on a part of that journey themselves and thinking, ‘Oh, this is me, this is my lot in life,’ and no, you can turn that around by your own drive and support of your family and things like that. That’s why it’s important as it gives a full picture of a man.”

That’s all very important, but also very heady stuff. Anderson, meanwhile, chimes in with his hope that the two-pronged attack of the show is successful on both points. “I just hope they laugh,” he says gleefully of the audience. “Gather with their families and just enjoy the show, so that we can go for more seasons and more seasons.” 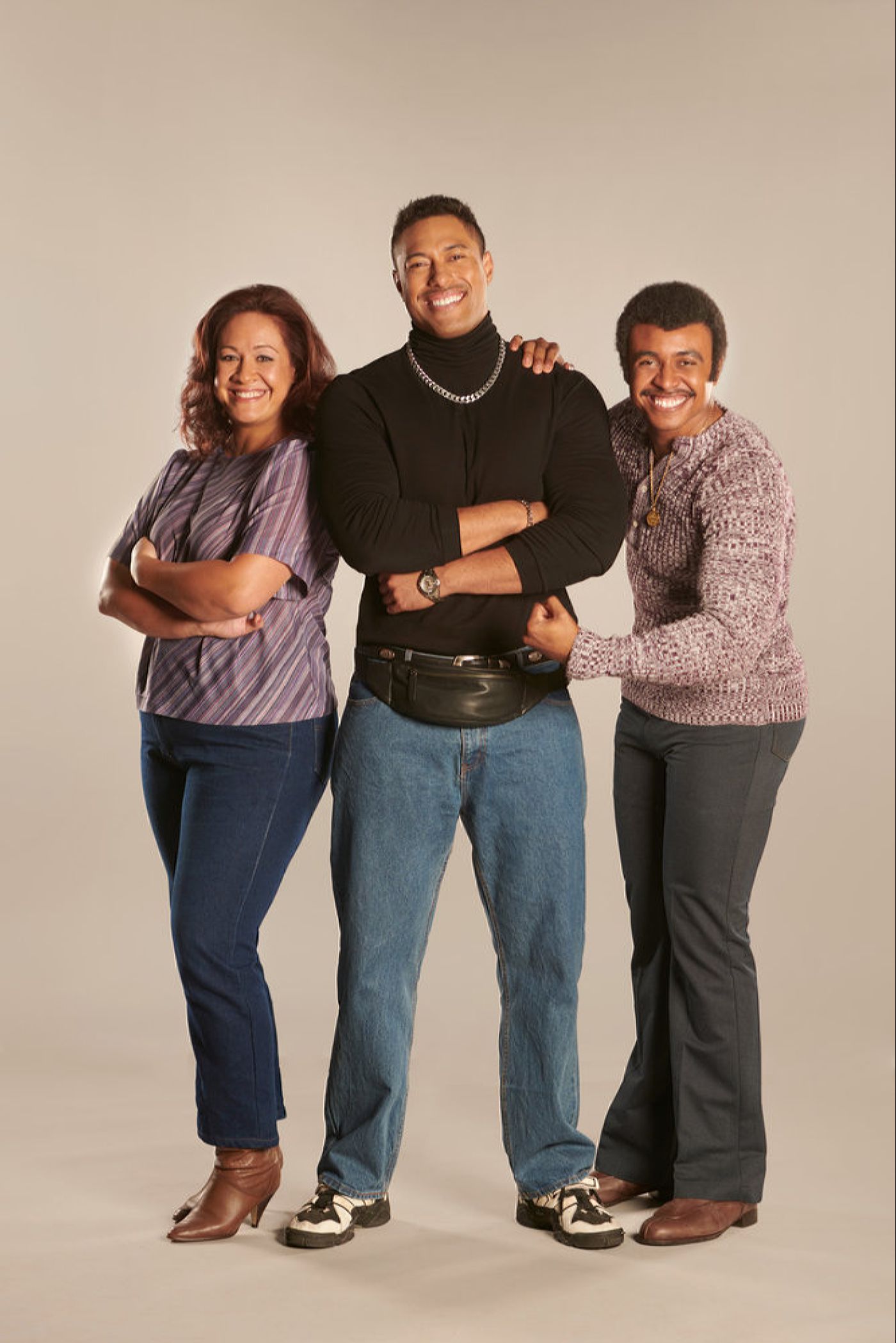 Just as with the first season, the cast and crew of Young Rock, along with the rest of the world, adapted their process according to evolving COVID-19 protocols and restrictions, although there was a certain level of preparedness that came with handling that part of the production for the second time around. “I think the beginning of filming was fine, because we were in Queensland and the borders were shut,” Leilua recalls. “Everyone had their own levels of what they felt comfortable doing, but I was always worried about filming being delayed and not being able to get home to my family when I thought I could, so that was something that was constantly on my mind. But the production handled the COVID situation really well.”

Anderson certainly felt the same concerns regarding the potential for another production shut down as the experience in season one, but his concern was for a slightly different reason “I was trying not to get COVID and all I could think about was, ‘Stacey’s gonna hate me because they’re just gonna get pushed back,’” he says with a laugh (and he gets one from Leilua as well).

As Anderson and Leilua now enjoy the show as it airs, meet the press, and eagerly look forward to future potential seasons, they each offer a wish list item of what they would still like to accomplish as it relates to Young Rock. First, Leilua’s hope is that she can soon cross a sort of COVID-related divide and meet face-to-face with Ata Johnson. “I feel like that’s just kind of the last piece of the puzzle,” she explains. “That’s something that I’ve always been thinking about over the last couple of years, and when that day finally comes, it’ll be awesome.”

As for Anderson, he has a much more immediate goal, following his second run of doing the in-ring work as Rocky Johnson. “I need to get in better shape,” he quips, shaking his head. “I’ve got to work harder, I’ve got to get bigger.”

As each actor chases their next dream, stay tuned to SlamWrestling.net for further interviews with the cast and crew of Young Rock, along with episode reviews.