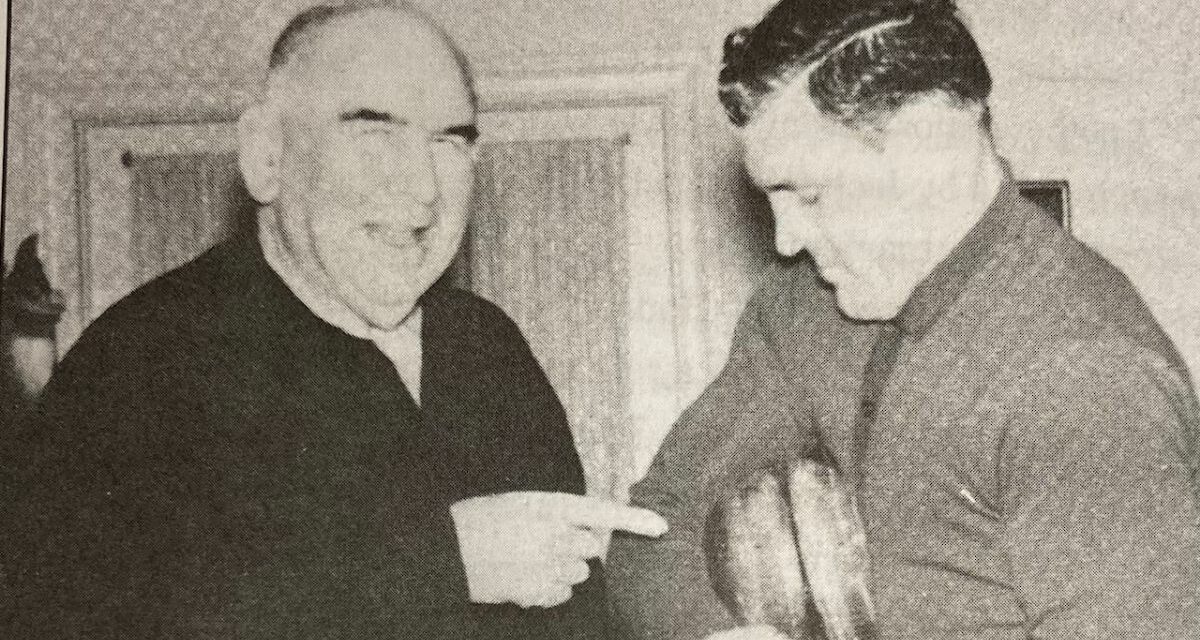 One of the most intriguing pieces of memorabilia in the history of wrestling is back home!

Called “The Ed Lewis Headlock Machine,” it is an iconic device in both professional and amateur circles, but mainly in the pro ranks.

It was developed in the 1920s by the legendary Ed “Strangler” Lewis, one of the greatest stars in pro history, back when the sport still was somewhat real. He wrestled over 6,000 matches over four decades and was world heavyweight champion for many years.

Professional wrestling is an enigma to 99 percent of the populace but has come back into the focus of many amateur fans with the announcement by Gable Steveson that he will go to the WWE at the end of this college season. It was a real athletic contest in the early 1900s. But matches could last for two hours or more, and became very boring for the public, with one man riding the other for long periods of time working for a pin or submission.

In the Roaring ’20s, with baseball, football and other sports taking off, wrestling had to adjust and become more entertaining. In came the punches, drop-kicks and other hokey stuff.

From that point on, 98 percent of the matches were pre-determined. But there were double-crosses as money and egos got involved, and sometimes things got real. That’s when wrestlers known as “shooters” like Ed Lewis and Lou Thesz and a few others – Dan Hodge, for one – could keep the other guys in line. They were very tough men who were highly skilled at submission wrestling and could end a match at any time. Messing with them and trying to alter the pre-arranged outcomes could result in a broken arm or ankle, and put the offender out of action for months.

In his prime, Lewis stood alongside Babe Ruth, Jack Dempsey and Jim Thorpe as one of the most idolized sports heroes of the 1920s. There is even an incredible photo of him holding Babe Ruth in a headlock when the two superstars were at a celebrity event.

Here is the story behind the headlock machine and where it now resides.

After retiring from the ring in 1948, Lewis became a part-time evangelist and public speaker. He also mentored such wrestlers as Dick Hutton, three-time NCAA champion from Oklahoma State, and Dan Hodge, undefeated three-time NCAA champion at the University of Oklahoma, when they turned pro. For a period in the late 1940s, he served as manager of Lou Thesz, one of the greatest professional champions of all time.

Lewis’s last great amateur star was Hodge and they hit it off right away – two kindred spirits marching to the same drum beat.

For years, Lewis relied upon his fearsome headlock to subdue foes, and to intimidate them. In order to develop his crushing power to its greatest extent, he took a solid block of wood, had it shaped in an oval, split it in half and inserted heavy-duty coils, making it very tough to close. He spent hours with the machine over the years and was able to snap it shut, a truly difficult task. 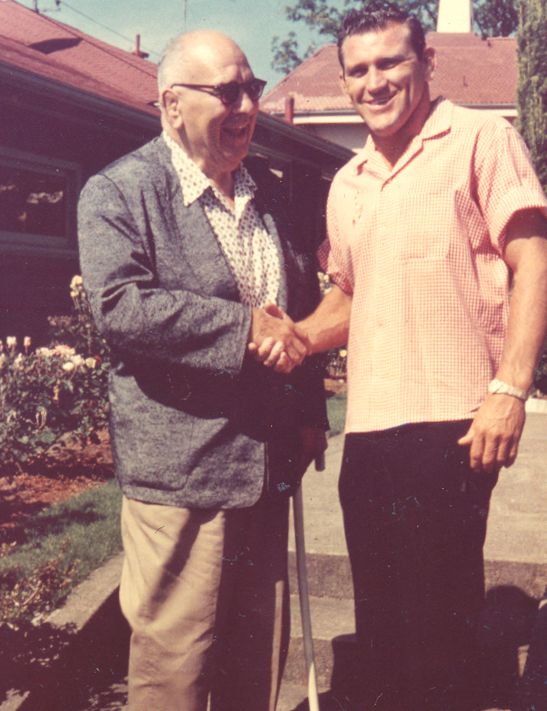 When “The Strangler” retired, he said he would give it to anyone who could close it. Many tried but none succeeded. Then Dan Hodge offered to try it. With his awesome power, Dan slammed it shut on the first try – and Lewis gave him the machine.

For many years, it sat in Dan’s home in Perry, Oklahoma, where he would show it to visitors. Then he loaned it to the National Wrestling Hall of Fame in Stillwater, where it remained for a long time. 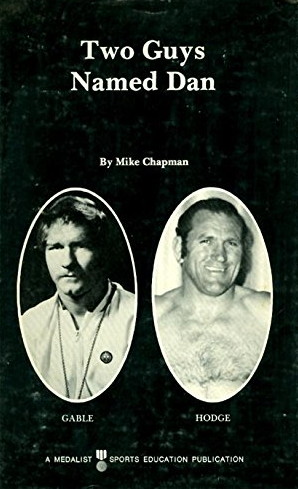 I first met Dan in 1976, when I wrote my book Two Guys Name Dan, which was about Hodge and Dan Gable. When my wife Bev and I created the WIN Memorabilia Show back in 1997, Hodge and his wife Dolores were our first guests – and for many years after. He became a regular guest at the Celebrity Golf Tournament held at the International Wrestling Institute and Museum’s fundraiser in Newton, IA, and we all became very good friends.

In 1995, I created the Dan Hodge Trophy and it quickly became one of the top honors in all of collegiate wrestling. Today, over one million fans have seen it presented in person at wrestling banquets and fall football games. 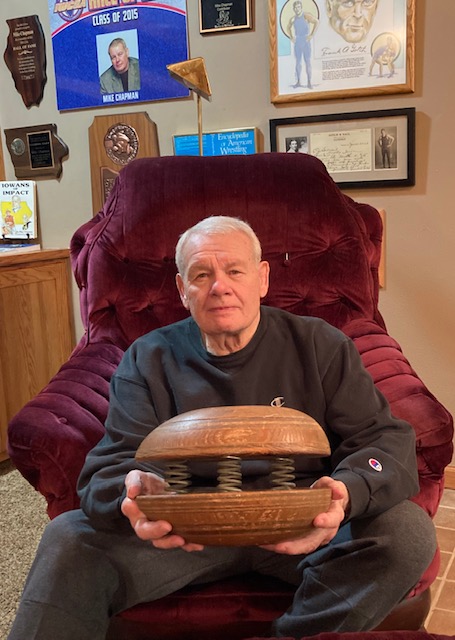 Mike Chapman holds the Strangler Lewis Headlock Machine while sitting in a rocker chair once owned by Frank Gotch.

When Dan passed away on Christmas Eve 2021, at age 86, it was the end of an era – when the professional and amateur wresting worlds had found some common ground.

And the headlock machine helped define that era!

Now I have really cut back on my travel, so last month Bev and I met Dolores and her daughter Linda Cline, and her husband, Kerry, in Kansas City for a wonderful meeting… where I returned the headlock machine to them.

Three members of the Hodge family – grandsons Brent Hodge, Tyler Cline and Patrick Hodge – created the Dan Hodge Foundation and are raising money for worthy projects, including scholarship support to young aspiring wrestlers. They are taking the headlock machine out into public once again, to places like the Tulsa Kids Nationals, owned by the Roller family of Tulsa. For two decades, Dan was the honorary medal presenter at the event and thousands of young wrestlers were able to meeting one of the sport’s all-time legends.

“We were all so thrilled to have the headlock machine,” said Brent recently. “We set up a booth at Tulsa Nationals and we had it displayed out front with a picture that had Ed Lewis and my grandpa together squeezing the machine.

“It was a huge success! We had so many kids come by and ask what it was and try to close it themselves. Of course, none of the wrestlers were able to but I would guess that close to 1,000 kids tried. It was so great to have because it was an easy way for us to talk to people about the Dan Hodge Foundation — or more importantly, educate these younger kids on who Dan Hodge was. A lot of them didn’t know who he was so we would talk about him and their dad or coach would jump in and say, ‘let me tell you something about Dan Hodge…’

“We also had a framed picture of the Dan Hodge Trophy so another thing we would do is ask where these kids were from and relate one of the past Hodge winners to wherever they were from and explain what the trophy meant, if they didn’t already know.”

Brent says it “was great to see some of the kids walk by the next day and tell their parents or teammates about Dan Hodge or the headlock machine. One coach even came up to us the second day and asked to see the headlock machine because he said that’s all his boys would talk about at dinner the night before. We were able to raise around $600 at this event and plan to do more fundraising.”

In less than a year, the Dan Hodge Foundation has awarded its first scholarship to Joseph Hendershot, who is currently wrestling at Texas Wesleyan University, and has bought a set of scales for a youth wrestling program. It has also sponsored some kids to enter wrestling tournaments who couldn’t afford it.

“We’re looking forward to doing more of these kinds of things as we continue to grow,” said Brent.

So I was delighted to return the legendary headlock machine to Dolores and the Hodge family. It is not only an important piece of wrestling history, but also is playing a vital role in keeping Dan Hodge’s legacy alive and helping promote the sport he loved.

EDITOR’S NOTE: This article originally appeared in WIN Magazine, and is used here by the author’s permission.