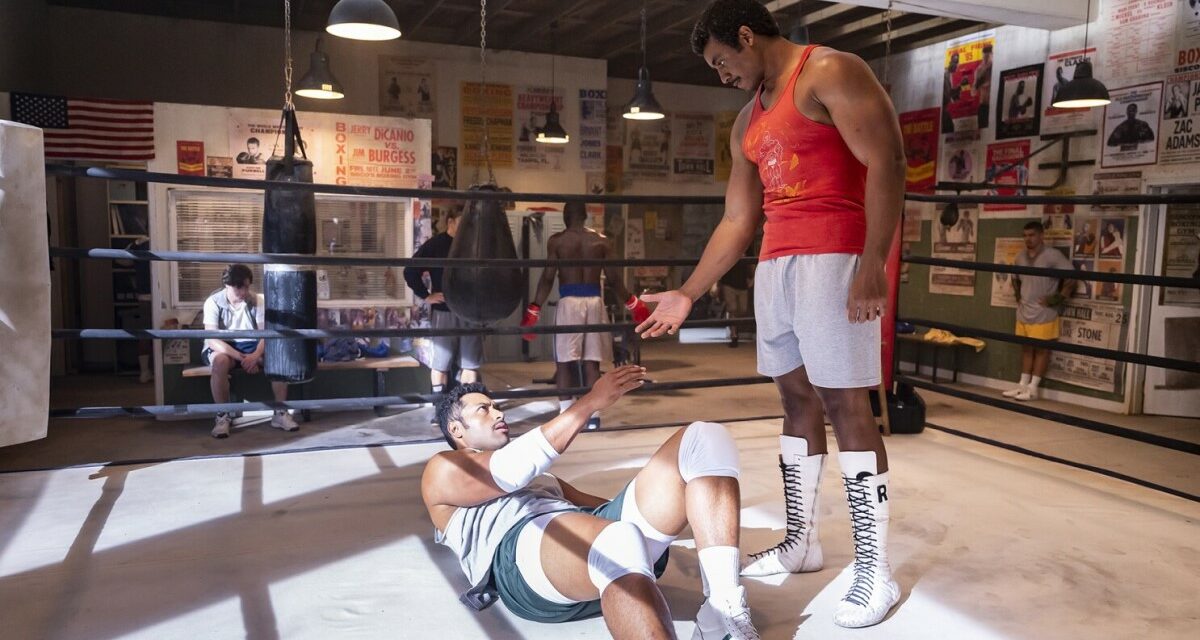 For wrestling fans of a certain age, and that includes this writer, tonight’s episode of Young Rock takes place in a sweet spot of recent wrestling history. While the names and stories of some of the other episode’s wrestling stories are more than familiar, it wasn’t always in an era that I was watching full-time. In tonight’s episode, however, when we see a clip of a 1995 WWF Royal Rumble promo featuring The Undertaker and Bret Hart … well, I remember very well wacthing that promo live.

Let’s back up a bit, though, and see what The Undertaker and Hart have to do with tonight’s episode, which takes place in around ’95 as Uli Latukefu takes his turn portraying Dwayne Johnson. With his football dreams dashed, Johnson has returned home and is wary of admitting to his parents what he’s already told his girlfriend Dany: that he thinks he’s going to give wrestling a try.

Dwayne is nervous to say it out loud to Rocky and Ata because it not only means admitting that he failed at football, but also that it will commit him on the new path that he isn’t convinced of himself yet.

Rocky is still working at Circuit City, Ata as a telemarketing travel agent, and Lia is still hooked on the OJ Simpson trial. Feeling lost, Dwayne tries getting a boost by going down memory lane, donning his Miami Hurricanes jersey and meeting a former teammate at a bar to watch another former teammate, Warren Sapp, playing in the NFL on TV.

While that doesn’t really help with Dwayne’s frame of mind, he does return home to find a late night ad playing on the TV with Lia fast asleep on the couch. On it, he sees — you guessed it — The Undertaker and Bret Hart. Dwayne starts paying attention to all of the signs pointing him towards the ring, and when he receives a call from Calgary Stampeders’ head coach Wally Buono the next day, the very call he’d been waiting a long time for, he politely turns the offer down.

Rocky is confused and upset, so Dwayne has to reveal his desire to get into the wresstling business with hopes that Rocky will train him. Ata and Lia are elated, but Rocky is not only less than pleased, he at first refuses to train his son.

Privately, Ata calls out Rocky out for his reaction. He says that after giving thirty years to the business, he doesn’t have much to show for it and doesn’t want that for his son. Ata, on the other hand, believes that this is Dwayne’s calling.

The father/son training sessions are held in a boxing ring, with a stiff mat and no give. The training is punishing with lots of falls, lots of selling, and yes, lots of chops.

Dwayne begins forming his idea of what he thinks he can bring to the ring, as his father is stressing old school but he wants to bring some, well, electrifying touches and combine it with an old school mentality. He goes behind his father’s back and calls in a favour from Pat Patterson to come and scout him, because he wants to know if he should keep on this path.

Patterson’s response? Keep going, which is all that Dwayne needed to hear.

For those keeping score at home, yes, there are still scenes of “future” Dwayne Johnson in the closing days of his presidential campaign, where he’s still dealing with Julian, Sean Astin’s character who has a childhood grudge against Johnson. His team points out that “engaging in a public feud with an American citizen isn’t very presidential,” which can’t possibly be a comment targeted at a real-life politican, could it?

The most “meta” moment of the show comes as the Johnsons are all together actually watching the Royal Rumble. Afa and Sika are there to watch their nephew Yokozuna, and a young, precocious Joe Anoa’i, later to become Roman Reigns, challenges Dwayne to a wrestling match.

Dwayne’s response? The world isn’t ready for it, and a match like that could only happen at WrestleMania.

This is not the first time that the WWE has used a non-linear product to plant seeds about an eventual Rock/Reigns match-up. They also hinted at it heavily in their recent docuseries Evil , so keep your eye out for more non-traditional techniques used to set up the family feud.