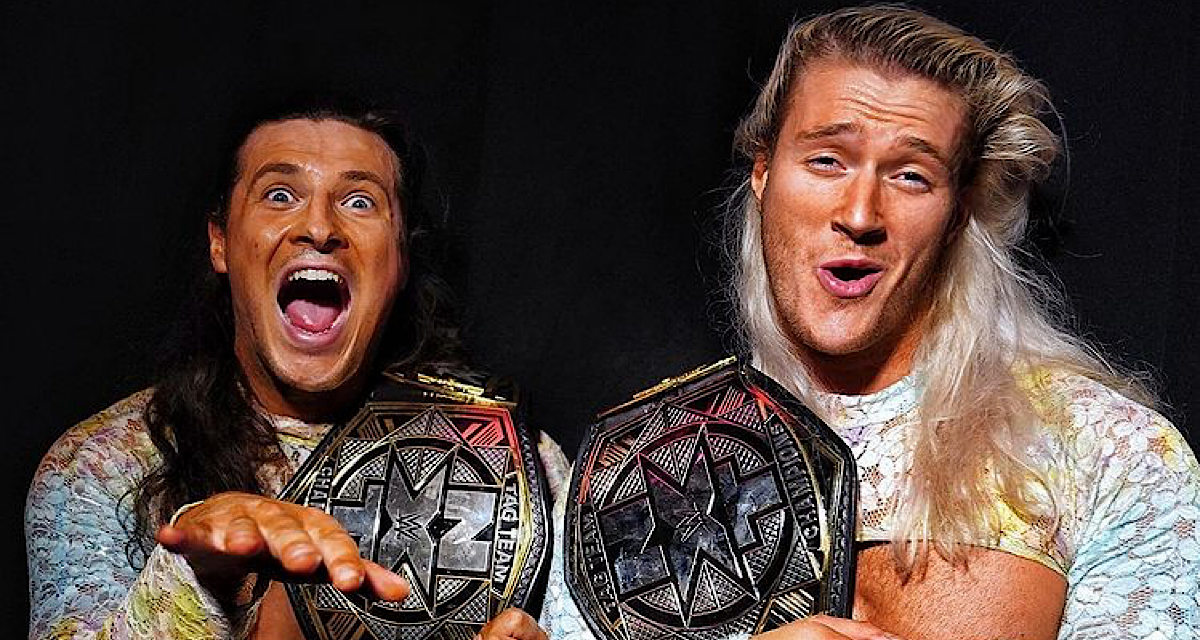 The kidnapping of Rick Steiner by Joe Gacy and Harland during last week’s episode was somehow lost in the shuffle of NXT’s headline news. Name changes and debuts were featured on RAW and Smackdown as Tommaso Ciampa, Gunther, Ludwig Kaiser, and Raquel Rodriguez officially joined the main roster leaving the 2.0 brand behind. Plus, after the ongoing controversy involving Nash Carter and his eventual release, MSK were relinquished of the NXT Tag Team Championships. Tonight, five teams compete for the vacant championships — and maybe an update on poor Steiner will be released too.

The competitors are in-ring at the beginning of tonight’s episode as a recap of last week’s kidnapping of Rick Steiner plays beforehand. A portion of the audience has turned on Grimes despite his touching story of placing the North American Championship belt on his deceased father’s grave. But he gains the upper hand with a ringside senton preceding picture-in-picture, neglecting the fans’ “Solo” chants and general lack of empathy. The challenger comes back with a corner hip attack and thrust kick, but Grimes hits his signature standing Spanish Fly. Sikoa counters the Cave In with a Samoan Splash, and the crowd loses their minds at the nearfall. But via interference by Trick Williams, Grimes hits the Cave In for the pinfall victory. The former champion Carmelo Hayes joins the fray, and the duo takes out both competitors to make a statement.

Grayson Waller is backstage with Sanga, and the former – still in a sling – vows to become new NXT Tag Team Champions with his partner. Commentator Vic Joseph states that the titles were vacated over the weekend, but no explicit reasoning is given.

Malcolm Bivens and the Creed Brothers are “killing two birds with one stone” tonight as they get revenge on Pretty Deadly and win the NXT Tag Team Championships. Earlier today, they selected their entry number into the five-team gauntlet.

NXT Champion Bron Breakker enters the ring, saying that his father is “back home now, safe and sound.” Joe Gacy appears on screen, revealing that he set Rick Steiner free, although leaving behind his new WWE Hall of Fame ring. Gacy explains the importance and symbolism of the well-earned ring before throwing it into the flames cackling. Somebody call 12 on this man.

Toxic Attraction is interviewed in the Toxic Lounge, and Mandy Rose says, “Dakota Kai, she has a lot of voices going on in her head. But none of them are whispering to her that she has a chance of taking this title away from me.”

Cameras catch Bron Breakker leaving the building and parking lot, screaming, “Get this camera out of my face. I got nothing for ya!”

“It looks like Jacket Time has run out of time,” says an overzealous Stone, as Jiro limps out for vengeance. He fights the good fight and floors the big man, scoring a two count off a top-rope swanton. But with a big boot and finishing slam, Wagner gets the pinfall victory. With a revamped theme song, alliance, and attitude, this version of Wagner has some legs. Speaking of which, Sofia Cromwell instructs Wagner to continue his attack, which prompts him to chuck Jiro “two rows into the NXT Universe.”

Nikkita Lyons has a sit-down interview about her rivalry with Lash Legend, but the latter interrupts by assaulting the former.

Pretty Deadly introduces themselves as Elton Prince and Kit Wilson, “the most extravagant, flamboyant, eccentric, and tastiest team in NXT.” They accuse the Creed Brothers of having no style, although Julius Creed’s Jordans say otherwise. “Yes boy!” Pretty Deadly says as they draw their number.

Rose has Gigi Dolin and Jacy Jayne of Toxic Attraction ringside, but Kai’s frenemy Raquel Gonzalez (now Rodriguez) has left for Smackdown. The champion has control after commercial, but Kai methodically makes the comeback. Kai hits the Kairopractor, and Toxic Attraction causes a ringside distraction allowing Rose to capitalize with a finishing kick for three. From behind comes Wendy Choo with water guns, and Toxic Attraction flops around like fish. 170 days and counting of Toxic Attraction running the women’s division, and it hasn’t gotten any prettier.

“Bron Breakker can’t carry the weight of this brand on his back,” says Joe Gacy. He retrieves the burning WWE Hall of Fame ring and places it onto his pinky, essentially branding his skin with it.

Tony D’Angelo meets with Santos Escobar in the locker room. He presents a “peace offering” of cash, but Escobar declines, saying that “la familia is worth more than that.”

NXT is living dangerously, giving Cora Jade a live microphone in-ring. She admittedly holds her own and stakes her claim at winning a championship while naming influences such as AJ Lee and Natalya. Tonight’s big surprise makes her entrance: it’s not AJ Lee, it’s Natalya, yet Jade is pretty flabbergasted. Smackdown’s Natalya tears up to the welcoming crowd reaction and for impacting Jade’s destiny so greatly. “You are the future of NXT,” says Natalya. “But the future is bleak!” She slaps Jade and smugly applies the Sharpshooter – bravo, Natalya!

NXT UK sensation Nathan Frazer has “a one-way ticket across the Atlantic Ocean,” and he’s coming to NXT 2.0.

It’s a matchup derived from Joe Gacy’s mind games, although it probably belongs on NXT Level Up. Anthony mocks his opponent’s heritage, and Quinn snaps back with multiple running forearms for the pinfall victory. Quinn is comparable to some unseasoned chicken.

Natalya walks into the women’s backstage area, announcing, “You’re all put on notice.” Tatum Paxley steps up to “the best of all time,” and Natalya accepts the challenge.

Indi Hartwell, Persia Pirotta, Dexter Lumis, and Duke Hudson are watching on backstage. The women convince their counterparts to team up, and they reluctantly agree.

The Creed Brothers and Legado del Fantasma begin the matchup, and the latter of which are extremely underrated. Their combination of aerial ability and crisp technique are on display, but Julius and Brutus take out Joaquin Wilde to advance forward. As Josh Briggs and Brooks Jensen enter with Fallon Henley, Elektra Lopez attacks before commercial break. Thereafter, the fresh duo slams Brutus through the announce desk and works down brother Julius. Some less than graceful offensive maneuvering later, Brutus eventually tags in and eliminates Jensen. Next is Sanga and Grayson Waller, who is still sporting a sling after his ladder fall – until he hilariously reveals his possum tactics preceding picture-in-picture. With momentum behind them, the Creed Brothers pick up the massive Sanga, and Julius officially puts him away. “The British are coming,” says commentary as Pretty Deadly makes their entrance. They beat down the drained yet resilient brothers, and with their finishing Spilled Milk slam, Pretty Deadly wins the NXT Tag Team Championships.

The main event gauntlet match was really exciting with a good variety of action. The Creed Brothers were made here, and Pretty Deadly acting as vultures is a great introduction for them. Unfortunately, the remainder of NXT is filled with dreadfully uninteresting storylines and matches. But of course, there are always sporadic highlights.