His first bout was a loss to Wild Bill Longson in 1952. Strangler Lewis, who acted as the manager of Lou Thesz, also took Hutton under his wing. After three months, Hutton left Tulsa (which was a light-heavyweight territory) and headed out on the road, starting in Texas. 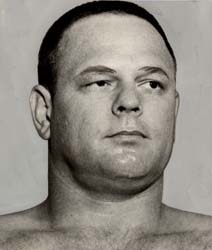 “Leroy told me when I was starting out that if you tie up too heavy with some of the pros, they’ll leave the ring on you and won’t come back,” said Hutton on his web site, dickhutton.net. “I learned early on when you have a job to do (performing), do the job the right way.”

It was in Al Haft’s Ohio territory, based out of Columbus, that Hutton really came into his own and established a memorable gimmick. Harkening back to the carnival days, Hutton took on all comers, with fans getting a dollar a minute for staying in the ring with him, and defeating Hutton would mean $1,000.

Over the years, Hutton became close friends with Lou Thesz, and was handpicked by Thesz as the next champion, one of one a few that he would agree to lose the NWA world title to.

On November 14, 1957, Hutton took on Thesz in Maple Leaf Gardens in Toronto. The Toronto Star had a report of his victory for the world title the next day. “The end came with startling suddenness at 35:15 of the one fall match when Thesz tried a leaping leg scissors off the ropes. Hutton countered masterfully with what he calls his Abdominal Stretch hold and Thesz was forced to concede defeat.

“The customers — around 10,000 of them came in out of the rain — sensed victory for Hutton when he secured this paralyzing hold on Thesz and about 200 rushed the ring to squeal their delight.”

Toronto promoter Frank Tunney was quoted in the article saying, “Hutton is one of the greatest young wrestlers I’ve ever seen. I honestly didn’t think he could beat Thesz. But I must say I’m happy he did.”

Over the years, Hutton was an established star in Toronto, thanks in large part to teaming with Gene Kiniski on a regular basis against Whipper Billy Watson. The $1,000 challenge was reinstated in Toronto. On one occasion, he was in a singles match with Watson, and The Whip pinned him – but Hutton’s foot was under the ropes. The referee awarded the $1,000 bill to Watson, and out stormed Kiniski to his partner’s aid. He ripped up the bill into tiny pieces. “I jumped in the ring, and he tore my clothes off, I was suspended for a month, fined $500,” recalled Kiniski.

Dick Hutton held the NWA title for 421 days, losing to Pat O’Connor in St. Louis on January 5, 1959. Many knocked Hutton over the years for his lack of colour and claimed he was a weak-drawing champion.

In the interview with Wrestling Perspective, Hutton addressed some of his criticisms. The NWA was in turmoil after a little more than 10 years as an alliance, and Thesz was seen as the glue holding it all together. Promoters were reluctant to spend time and money promoting Hutton, who was a virtual unknown with just five years under his belt as a pro, but unparalleled amateur credentials. “[P]erhaps I’d have been better off if I had a strong manager, someone to deal with the promoters. But, anyway, was I the only one who failed? Pat O’Connor came after me. He was no great shakes as a draw. Even Buddy Rogers couldn’t hold it together, which was something of a surprise to me. Gene Kiniski? No way was he a big draw. It got so bad with the NWA that Lou had to come back and take over again as champ.”

After his reign, Hutton wrestled in various places but never really was a top name again until 1960 in California for Jules Strongbow when he worked as Cowboy Dick Hutton in jeans. He also did a trip to Japan.

Heart trouble sidelined him from wrestling, but his second wife Katherine was a multi-millionaire, so he settled down on a ranch in Arizona and raised cattle, and then quarter horses.

Danny Hodge, another superstar-amateur-wrestler-turned-pro wrestler, last saw Hutton at an induction ceremony into the George Tragos/Lou Thesz Professional Wrestling Hall and the International Wrestling Institute and Museum in Newton, Iowa. He recalled his friend for SLAM! Wrestling. “I worked against Pat O’Connor and Lou Thesz many times, but never Dick. But I knew Dick, and he was so super. Not only a great wrestler, but a great worker with us, and was a great person.”

“Dick had little health problems. He had bad hips, and a bad knee, and he had those replaced. He was just, just getting along great last year at Newton. He just lived to come to the events,” said Hodge.

Hutton was preceded in death by his parents, Bailey and Gladys Hutton, and a brother, Jerald Hutton. Survivors are: his sons, Chane Hutton, of Lees Summitt, Mo., and Kin and Brett Hutton, both of Tulsa; 11 grandchildren; niece Janet Grey and her husband, Larry, of Sapulpa; and two great-nephews, Colin and Chris Grey.