From an Apocalypse, a Shadow descends upon New Japan

CALGARY — It was a normal sunny fall day when Calgary based wrestler Apocalypse grabbed his mail. Sorting through, he noticed a envelope from his trainer Tokyo Joe. When he opened it up he couldn’t believe his eyes. Inside was a Japanese wrestling magazine, and it contained an advertisement that said simply “The Shadow … Coming Soon.”

The ad had his picture.

“I was pretty blown away. You watch other people do it and think ‘maybe one day I can too,’ but I have never been one of those guys who felt ‘that is going to be me one day.’ So when I saw the magazine it was pretty overwhelming. I was a pretty happy guy that day.” 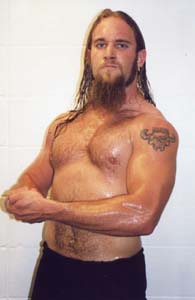 The news only got better as he soon got his first match assignments. His first match? A tag team main event in Tokyo’s famous Korakuen Hall, teaming with former WCW star Scott Norton against Josh Barnett & IWGP Champion Hiroyoshi Tenzan. Also scheduled are a match against Manabu Nakanishi, who wrestled as Kurasawa in WCW, and a non-title singles bout with Tenzan. SLAM! Wrestling caught up with Apoc just hours before his flight left Calgary and asked how he was feeling at that exact moment.

“That it is really cold outside so I am going to enjoy the heat there. It’s about 18 degrees out there right now,” he joked.

Unfortunately, there was not room in his luggage to fit a 6’8″ SLAM! Wrestling writer. Instead Apoc chose to take his Playstation.

“You end up spending a lot of time in your hotel room. Plus when you first get there your sleeping schedule is all messed up because it is a 16-hour time difference. Dave Swift told me he used to wake up at 3 a.m. and be wide awake. He didn’t take his Playstation and recommended that one definitely do so.”

Apoc is the third Calgary based athlete to head to NJPW in the past year. “Stampede Kid” TJ Wilson has embarked on three tours in the Junior-heavyweight division, while Dave Swift, dubbed “The Swifter” toured this past summer. All three men were rechristened when they headed overseas. So why did Apocalypse become “The Shadow?”

“They can’t properly say my name. Stampede Kid is the most suiting name out of any of us. TJ IS the Stampede Kid. None of us picked our names, Joe picked them for us. That was the reason, because Apocalypse is very hard for them to pronounce,” Apocalypse said.

It was a long road for the four-year veteran to get to this point. The past year has been full of very intense physical training.

“It’s taken a lot of hard work and dedication. My training over the past year has really taught me that I want to be a pro wrestler because I am willing to do a bit more then some other guys to make sure that I will make it,” he said. “I have put that full effort forth in the past year to the best of my ability that is what has done it. I worked hard and I got a touch of luck. We didn’t train every day of the year. With Joe it is training for a month or two then a month or so off. Our last break was July-November, that was the longest one in the past year.”

Over the past four years Apoc has matured as an athlete and had an incredible career. NJPW is another in a long list of promotions, added to NHB, Stampede, PWA, Matrats, POW, ECCW, CCW, and Twin Towers in Inuvik, N.W.T. in which he toured with Brutus Beefcake. With so many promotions and great experiences, it was hard for Apoc to pick, up until this point, the defining moment of his career.

“It’s hard to say. I have done things in the first four years that I never thought I would do. I didn’t think I would get to hang out with Jerry Lynn, let alone team up with him like I did in Saskatoon. Same goes for wrestling Sabu,” he said. But promoting a show in his hometown two years ago, which he would only refer to as “the hole” holds a fond memory. “That will always stick out in my mind, my hometown isn’t very big, so getting to wrestle in front of all of my friends and show everyone ‘hey this is what I am doing!’ I had a great time. That was a big moment.”

This is also not the first time he has traveled overseas to tour. Scheduled to do a three-month tour with All Star Wrestling in the UK from August until November, Apoc went through hell when he arrived after his 11-hour flight. He was stopped at customs, had his contact information taken away from him and then held for several hours until he was told he was being sent home. The only positive from the trip was that the flight crew recognized him, took pity and upgraded him to first class. For his trip to Japan he was well prepared.

“I have all of my papers and visa. So unless they are terrified of me and don’t let me in I should be okay.”

He was. Reports coming out of Japan say that the 6’3″, 220-pound athlete had an impressive showing in his first match before submitting to Tenzan’s Anaconda Vice. Going into the match, Apoc was understandably nervous; especially as of his Canadian trio he had the highest profile matches.

“I am definitely feeling a lot of pressure. When I found out my first match would be a main event in Koreauken Hall I nearly crapped myself. I don’t have a big ego when it comes to wrestling, not saying that the other guys do. But to hear that my first match is in a main event with guys of that caliber is pretty shocking when you are just a little Apocalypse.”

But he did take some comfort in having spent time training with Tenzan in Calgary this past summer.

“One thing that makes me less nervous is the fact that I have trained with Tenzan. But on the other hand, since he was here, he’s become the IWGP Heavyweight Champion. That blows me away that I will be wrestling him. It’s a non-title match, but still that is the champion. It’s kind of like on Smackdown! when Paul London showed up to wrestle Brock Lesnar … except I am far less known then Paul London.”

Although he has a heavy wrestling schedule on his first tour, Apoc is hoping to check out some of the sights and sounds of Japan.

“I’d like to see as much as possible. I am doing a lot of wrestling and that is my main interest is going. There is so much history in Japan that I would like to explore, but who knows what I will get to do. I love ancient Japanese Mythology, I am big on that sort of thing. There is so much that you can see or do there.”

Most importantly, Apoc wants to take as much from the trip as possible before he returns in mid-December.

“Going is such a huge step from anything I have ever done in wrestling. Just the experience and the knowledge I can gain. It would be nice to get a bit extra credibility to my name here so that when people want to bring me in I can tag on a couple of extra numbers to my price tag. Not saying that one trip to Japan will do that, but hopefully if things go well and people appreciate and enjoy what I do then that is how it will go.”

Apocalypse continues to succeed in Japan, and returns in December.

PAST STORIES ON APOCALYPSE / VIKTOR