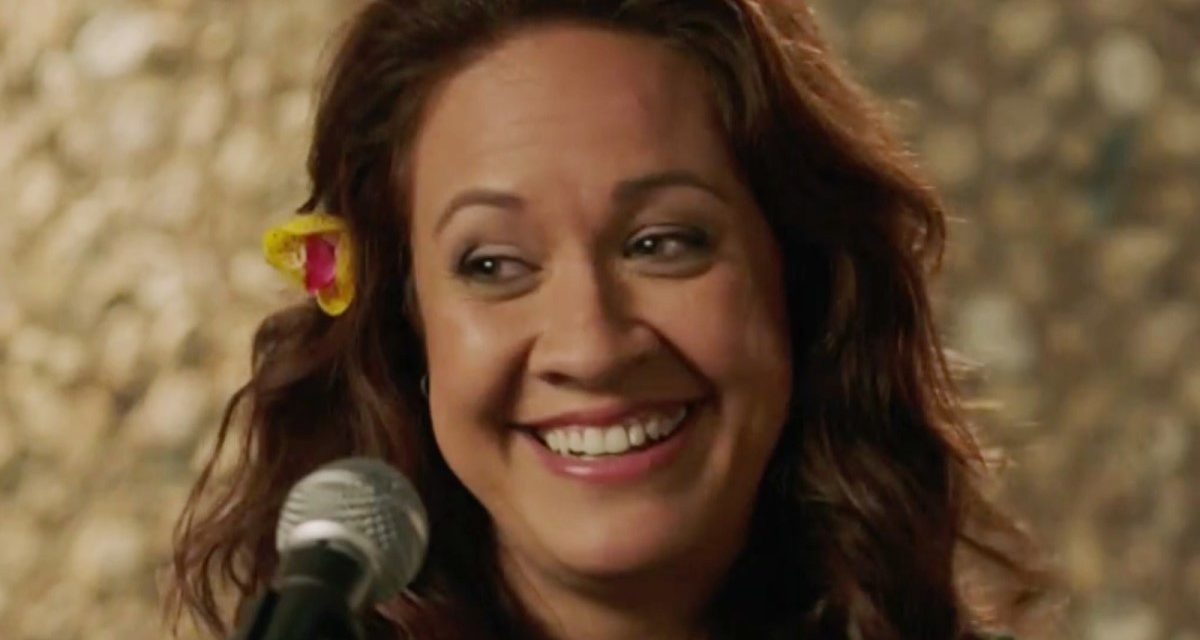 It’s not a stretch to say that pro wrestling is largely a macho, manly kind of world. This is not diminish the historic contributions of women to the business, but when you tune in you’re more likely to see big men who excel at appearing to beat each other up.

In NBC’s Young Rock, showing on Tuesday nights at 8:00 EST, which shows a young Dwayne Johnson growing up surrounded by brash characters such as The Iron Sheik and André the Giant, not to mention Dwayne’s father Rocky Johnson, it would be easy to imagine the character of Ata Johnson, Dwayne’s mom, as a woman overshadowed by all of the testosterone, taking care of the homestead while Rocky is off seeking his dream.

For the record, Stacey Leilua, who plays the role of Johnson’s mother, doesn’t see Ata as anything less than a fighter herself. Leilua spoke to Slam Wrestling from her home in New Zealand to discuss her portrayal of Ata Johnson, the representation of Samoan culture in entertainment, and how playing the ukulele may have been the most intimidating part of the whole season. 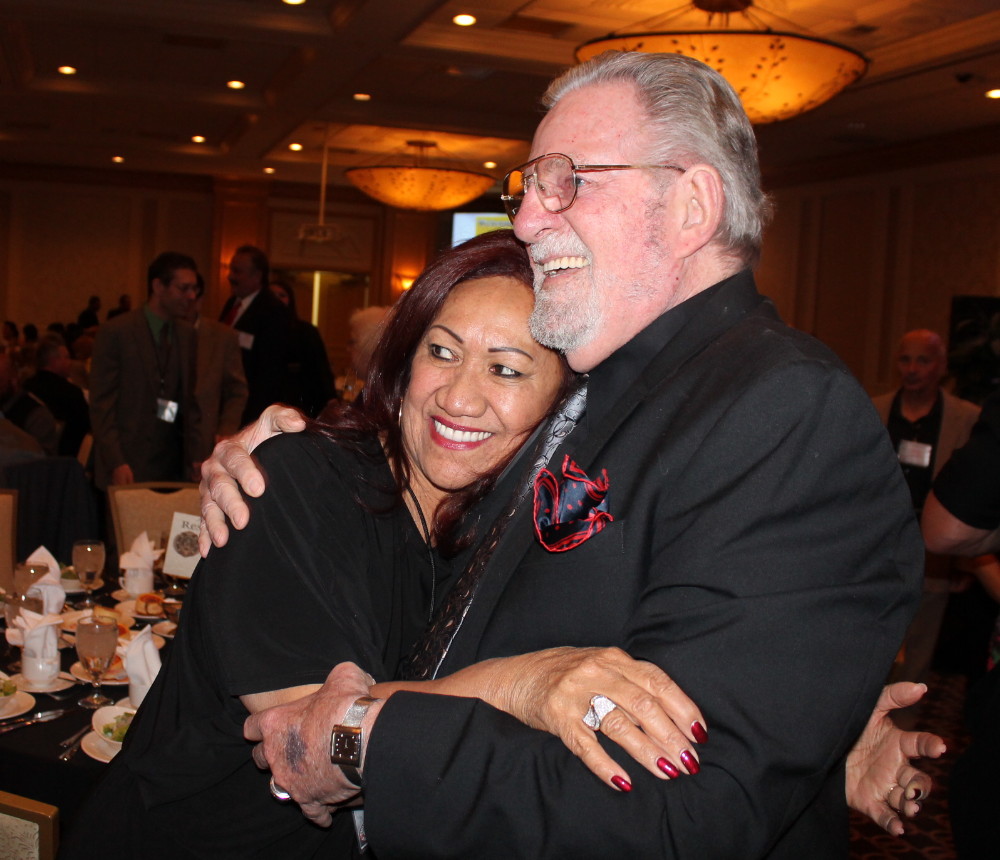 “(Ata’s) a strong woman and she’s been through it — she’s grown up in that world as well,” Leilua begins, speaking of how Ata was as involved in the wrestling business as anyone. “(Wrestling) was very integral to her life experiences and how that shaped her as a mom. She’s very much like that lioness mother, who will protect her babies at all costs and really go out there fighting for her family.”

After being cast, Leilua had the opportunity gain some insight into Ata’s character after speaking with her and Dwayne over a Zoom call. Something that Dwayne said specifically stuck with Leilua all throughout filming. “He kept reiterating the fact that she’s the heart and soul of the storytelling,” Leilua continues. “She was backstage at shows and the boys loved her, and all the wrestlers have this respect for her, so it was really nice to be able to bring all that to the show.” 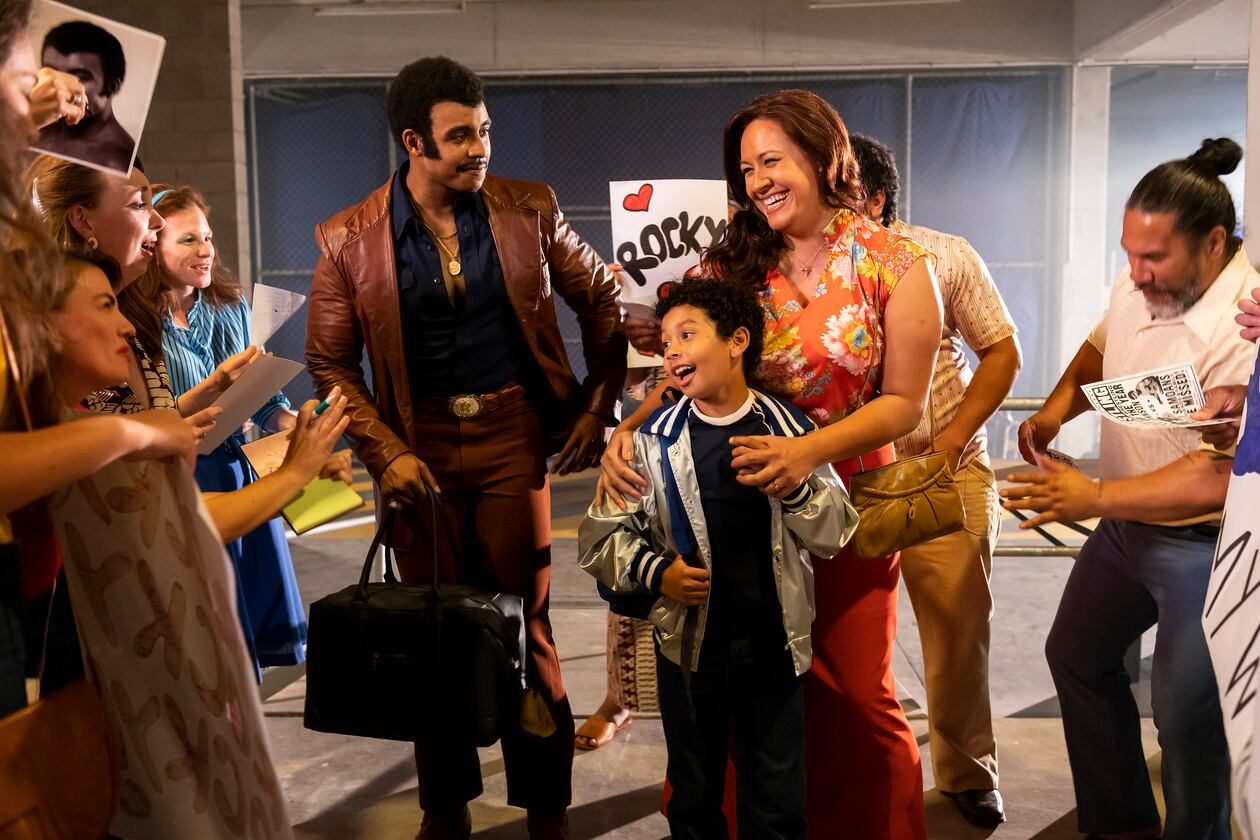 “I didn’t want to fall into the trap of trying to recreate an exact replica of who she is. At the core of this woman, she’s a mother, and she’s a wife, and she’s part of this wrestling world.”

Leilua comes by her appreciation for a strong mother character honestly, as she details the hardest part of her own Young Rock filming experience: the COVID-19 restrictions that limited contact with her own family. “I have a young daughter, and I couldn’t see her for a long time,” Leilua explains. “That for me that was the hardest thing because that’s what grounds me, and that’s my life outside of the work.”

What began for Leilua as an opportunity to audition turned into a fast-moving machine that was suddenly shut down, to the point that she wondered if the production might be shuttered. “I get the request for an audition through my agency,” Leilua says. “Over the space of a couple of weeks, NBC was coming back to me and saying, ‘Can you fix this, or work on that,’ and then my agent says, ‘They want to send you to L.A. for a chemistry test with (Joseph Lee Anderson), who’s playing Rocky,’ so that all came along pretty quickly. I was there for maybe four days and once I came back, I got confirmed for the role, but then COVID hit. I was on the other side of the world, not knowing what was going to happen, and I actually thought it might not happen.”

With the production’s location shifted to Brisbane, Australia, it was certainly closer to Leilua’s home, but in some ways it didn’t matter. “The hardest thing for me was having to adhere to a two-week quarantine on either side,” she admits. “It starts off okay, but then towards the last days you’re just really chomping at the bit to get out.”

Once production was in full-swing, Leilua found herself immersed in a world that she readily admits had never really grabbed her attention. “I wasn’t really a wrestling fan, by any stretch,” she says with a laugh. “Of course, I knew about it and would watch a few things randomly, but I didn’t really have any kind of interest.”

While you probably shouldn’t keep an eye out for Leilua in a front-row seat at a future wrestling event, she describes how the experience of Young Rock has changed her perspective on the industry. “Oh, it’s definitely given me a whole new respect for it,” she explains. Specifically, she was blown away by the physicality she witnessed as actors playing the wrestlers in the show went through their training. “One day so I came to set early, I had a wardrobe call or something,  and I had to wait around. One of the ADs (Assistant Directors) said, ‘The boys are practicing in the other studio, do you want to go have a nosy?’ And I was like, yes please!”

She watched as Chavo Guerrero Jr., coordinator for the wrestling scenes, worked with actors like Matt Willig, Brett Azar, and Kevin Makely (who portray André the Giant, The Iron Sheik, and Randy Savage respectively) to help pull off the physicality of their in-ring acting.

“It’s funny, because in the pilot episode, they have that whole thing of Dewey saying, ‘It’s all fake,’ right,” Leilua recalls. “It’s very real. In the scene that the boys were filming, they didn’t have stunt doubles, so you’ve got these actors really putting their body on the line. I just remember thinking, this is only one day, for a few hours a week, so I have huge respect for actual wrestlers. This is their career and they’re doing this constantly, putting their bodies on the line. It was just amazing to be able to see that and witness it up close.”

Leilua admits there was an aspect of portraying Ata that was going to be another brand new experience for her, but one she was happy to grasp onto to stretch herself as a performer. “I think the biggest thing for me was the singing and the ukulele playing because I do neither of those things in my life,” she says. “You see on (Ata’s) videos that she’s always got ukuleles literally within arm’s reach, and she’s so proficient at it, and she sings beautifully. That was the hardest thing for me, because I sort of taught myself to play the chords and do the singing, and it was a challenge but a fun one.” 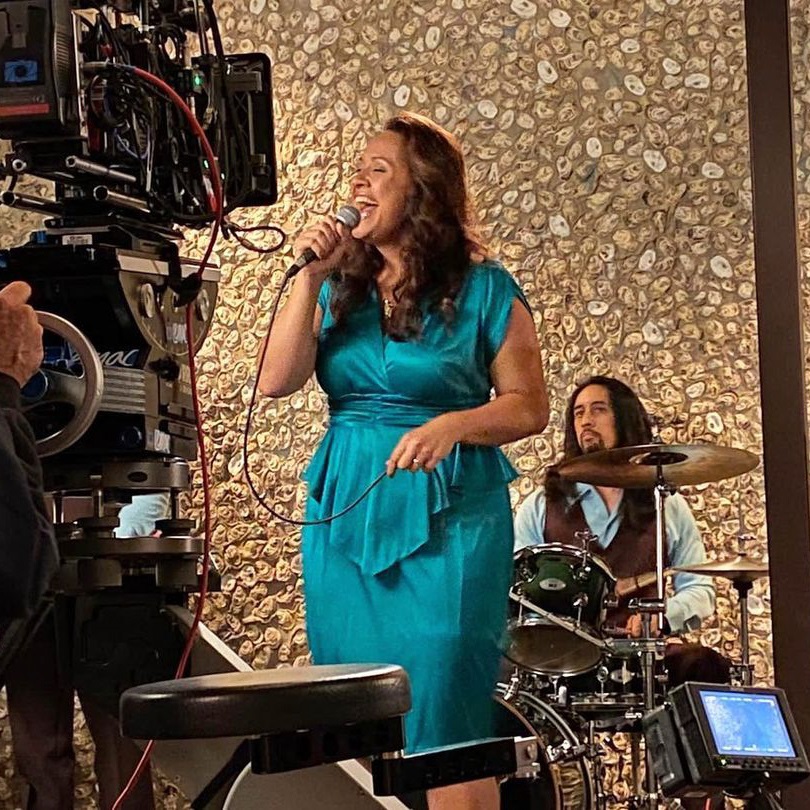 Ultimately, Leilua was willing to take on just about any challenge the production might present, as the significance of this role and the exposure it represents was not lost on her. She spoke of how playing a dramatic version of a person who was so closely connected to the show necessarily influences her performance. “I try not to think of it so much like pressure,” she explains. “It was more that this is a huge responsibility, and the fact that she’s Samoan — roles like this didn’t exist for Samoan actors, and an older Samoan actor. I’m nearly 40 years old, so the fact that I can play a Samoan woman, a mother on primetime TV, that’s a huge deal. I really felt a responsibility of trying to bring that through in the character, finding all the little elements like singing, the clothes that she wears, and even a little bit of ad lib Samoan dialogue that I have with Ana (Tuisila, who plays Lia Maivia). All those things are really important to me to try and bring through because I see it with Ata now, she’s very much a Samoan woman and she expresses that in certain ways. ”

As Leilua speaks with admiration of how Ata proudly displays her Samoan heritage, the idea of her now being someone that others will look to as displaying their culture in a prominent role comes up. While it’s not something she sought out, she’s happy to embrace it and has already heard from some people who took notice. “When you get messages from people saying, ‘Oh my gosh, I love the fact that I’m turning on my TV, and my culture is there on TV,’  that’s so special to me,” she says. “Like I said, it’s a huge responsibility that I take very seriously, and I have so much pride in being able to be the one to do that.”

“My grandparents came from Samoa to New Zealand in the ’50s in search of a better life,” she explains. “It’s like these echoes: that’s what Peter and Lia were doing, so it’s this shared experience of Islanders. We always say a win for one of us is a win for all of us, so that’s I feel it’s very much about representing the culture.” 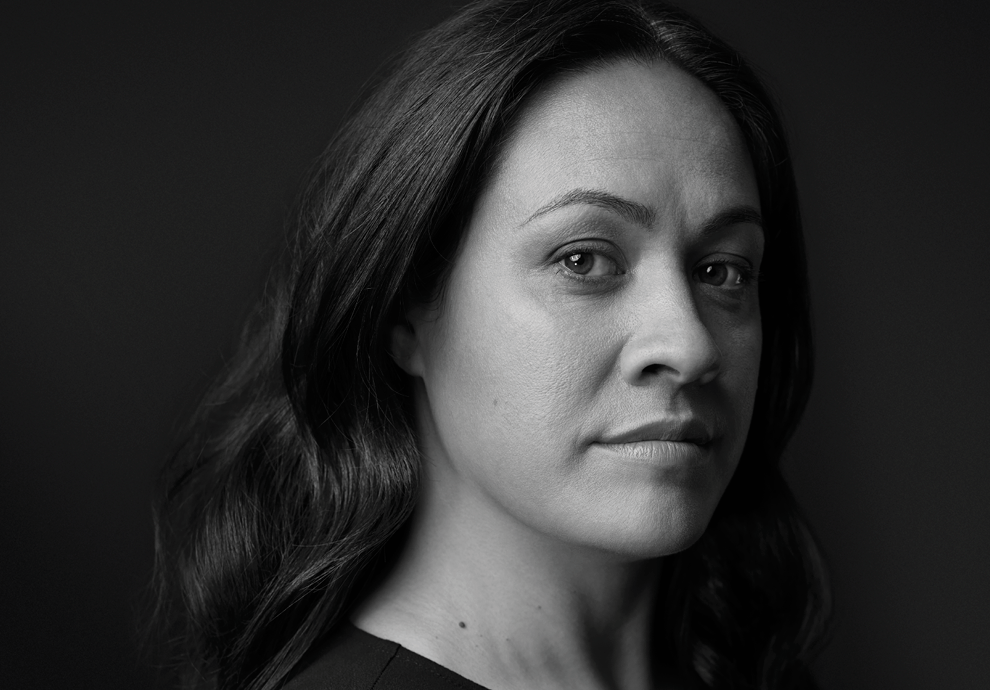 Leilua in a promotional photo for the Silo Theatre production of Wild Dogs Under my Skirt. Photo: Toaki Okano

Looking ahead, Leilua has returned to her roots in theatre acting, while admitting with a chuckle that she’s crossing her fingers for a second season of Young Rock. “Because my background has been in theatre, I’ve really enjoyed the experience of working like a medium like this, so hopefully it will open doors for other auditions,” she says. And yet, returning to her touchstone, her priorities remain with her family first, and in this way she sees a parallel between the push and pull between family and business documented in Young Rock. “It’s kind of art imitating life, because you want to take those opportunities but at the same time, my daughter’s very much at the forefront of me making any career decisions, so it’s just trying to balance the two.”

Stacey Leilua may not come from the world of pro wrestling, but she knows how to put a vice grip onto an opportunity like this. In balancing her home and work aspirations, she’ll be ready for what comes next as the world inches back to normalcy. Maybe even a song or two on the ukulele.