Big upset at Best of the Super Juniors 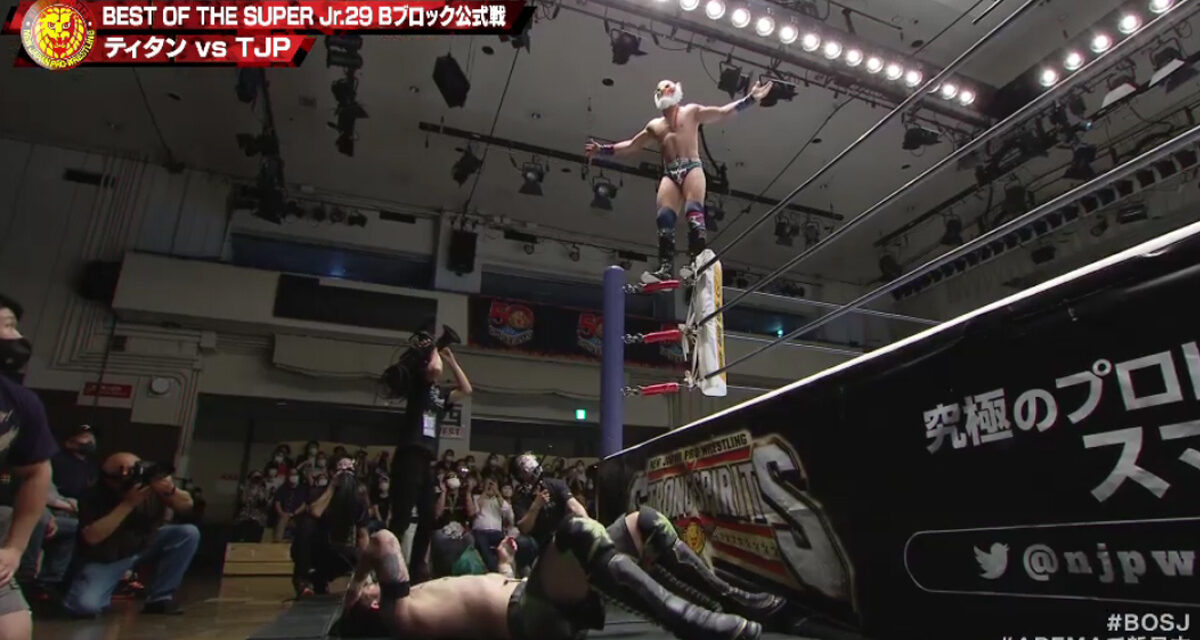 Reader Alert: Just a reminder that today’s Best of the Super Juniors event is completely free to watch on NJPW World without a subscription. You can check it out here.

The Best of the Super Juniors tournament presented an entirely different format today with no bonus tag team matches. Instead, the entire card featured matches from both blocks.

In the upset of the tournament thus far Douki defeated El Phantasmo to claim two points and his second victory of the BOSJ.

Douki threw caution to the wind early on by leaping off a platform, over the announce desk and Kevin Kelly then landing on Phantasmo. Phantasmo raised Douki for what looked like a suplex and then dropped him over the top rope to the floor causing the crowd to collectively gasp. Douki kicked out of powerbomb and a UFO. 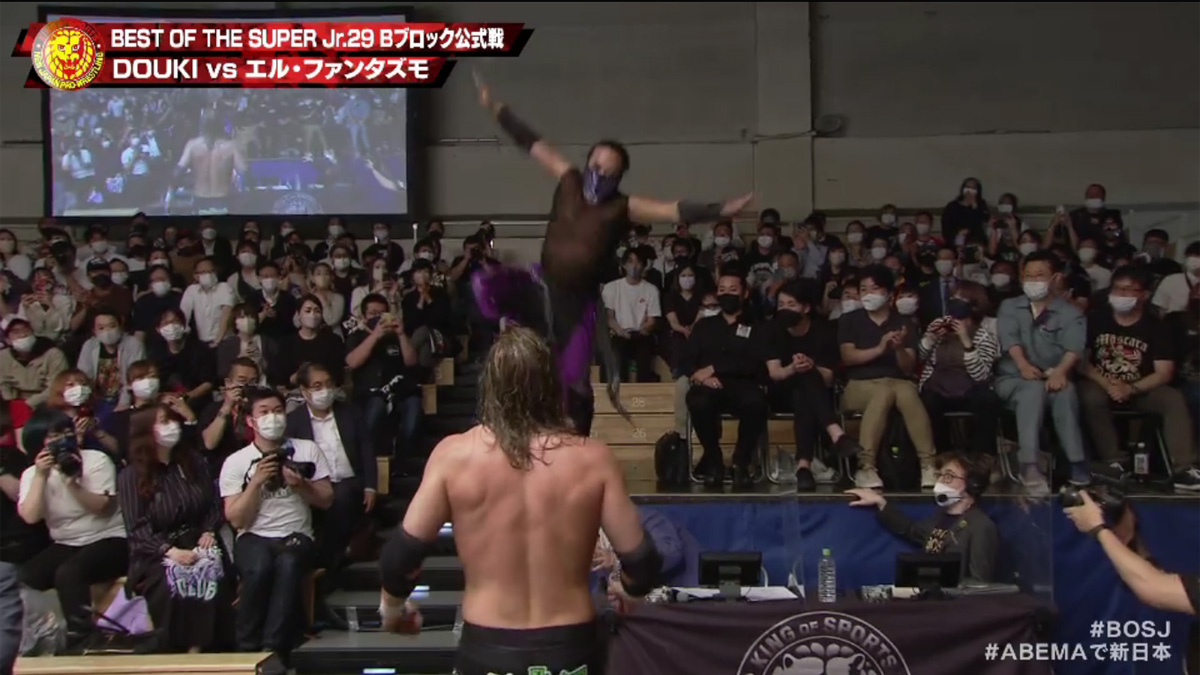 Douki avoided Sudden Death landing a kick of his own to Phantasmo’s head. Douki appeared to botch his Daybreak move but was apparently just laying in wait to roll Phantasmo up for the three count stunning everyone, including Phantasmo.

Bullet Club members Sho and Ishimori also clashed today with each trying to outcheat and outsmart the other.

Sho clapped for Ishimori as he made his way into the ring. As they raised their hands to “Too Sweet” each other, Ishimori poked Sho in the eyes once and then twice more. Ishimori took the fight to the floor smacking Sho’s head off the announce table. With Ishimori blinded with a poke to the eyes, Sho smacked Ishimori’s head against the table too.

Sho strangled Ishimori with the leather turnbuckle cover pad and hit him over and over with the bell hammer right in front of the official. He wasn’t disqualified though.

Later on, Sho shoved the official down so he could retrieve his wrench. Ishimori kicked the wrench away. He picked it up showing it to the crowd. Sho begged Ishimori not to hit him with it. Ishimori politely handed it back to Sho then promptly fell on the mat clutching his head in mock pain. Sho argued with the official claiming innocence. Ishimori blasted Sho in the noggin’ with the NEVER Openweight 6-Man Tag Team Championship belt and pinned him much to the crowd’s delight.

Taiji Ishimori now leads A Block with 8 points while El Desperado, El Phantasmo and El Lindaman sit at the top of B Block with 6 points each.

The tournament continues on Wednesday, Thursday and Saturday. The finals are on June 3rd.

Alex Zayne versus Francesco Akira – BEST OF THE SUPER Jr. 29 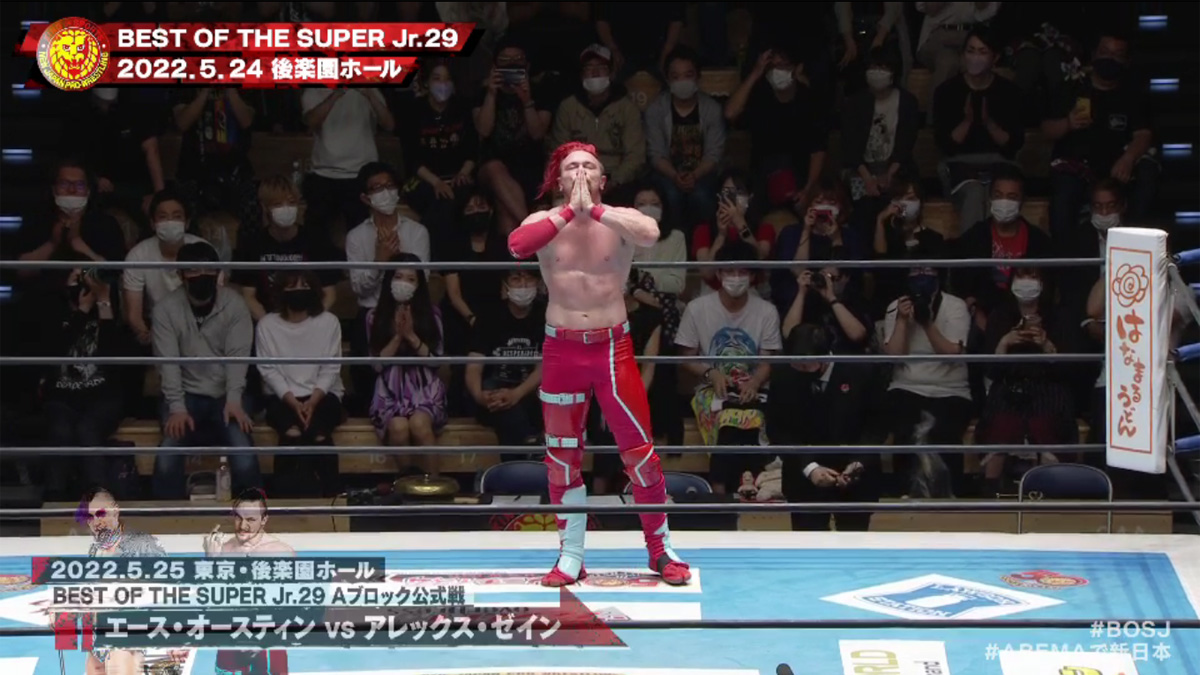 Alex Zayne shows the crowd how much he appreciates their support. Courtesy: NJPW.

A great bout between two emerging and fantastic talents. A cool little spot has Zayne doing a back flip off the top rope. As he charges in at Akira, Akira leaps off the top rope with a missile drop kick. Zayne wins with his Taco Driver.

Just like Phantasmo did in his match with Titan, TJP unlaces his mask when he has him in the ropes. Titan leaps off the top rope hitting TJP with a double stomp on the floor. Titan lands another stomp but this time to TJP’s back in the ring. Titan scores his first victory of the tournament.

Ryusuke Taguchi versus Clark Connors – BEST OF THE SUPER Jr. 29

Connors gets his first win with a Trophy Kill slam on Taguchi.

Bushi versus Wheeler Yuta – BEST OF THE SUPER Jr. 29

Yoh versus Ace Austin – BEST OF THE SUPER Jr. 2

Austin wins a super kick, spin kick contest with Yoh. He drops Yoh with the House of Cards and The Fold.

Douki versus El Phantasmo – BEST OF THE SUPER Jr. 29

Master Wato versus Robbie Eagles – BEST OF THE SUPER Jr. 29

Wato rolls up Eagles for a sneaky pin for his first win of the tournament.

Hiromu Takahashi versus Yoshinobu Kanemaru – BEST OF THE SUPER Jr. 29

Hiromu fights on and on but Kanemaru makes him finally submit to a figure four leg lock.

Taiji Ishimori versus Sho – BEST OF THE SUPER Jr. 29

El Desperado versus El Lindaman – BEST OF THE SUPER Jr. 29

El Lindaman escapes Desperado’s Numero Dos and Pinche Loco pinning him with a Snap Dragon Suplex and a German Suplex.