From only having seven bucks to only having six minutes: Dwayne Johnson’s WWF try-out featured in ‘Young Rock’ 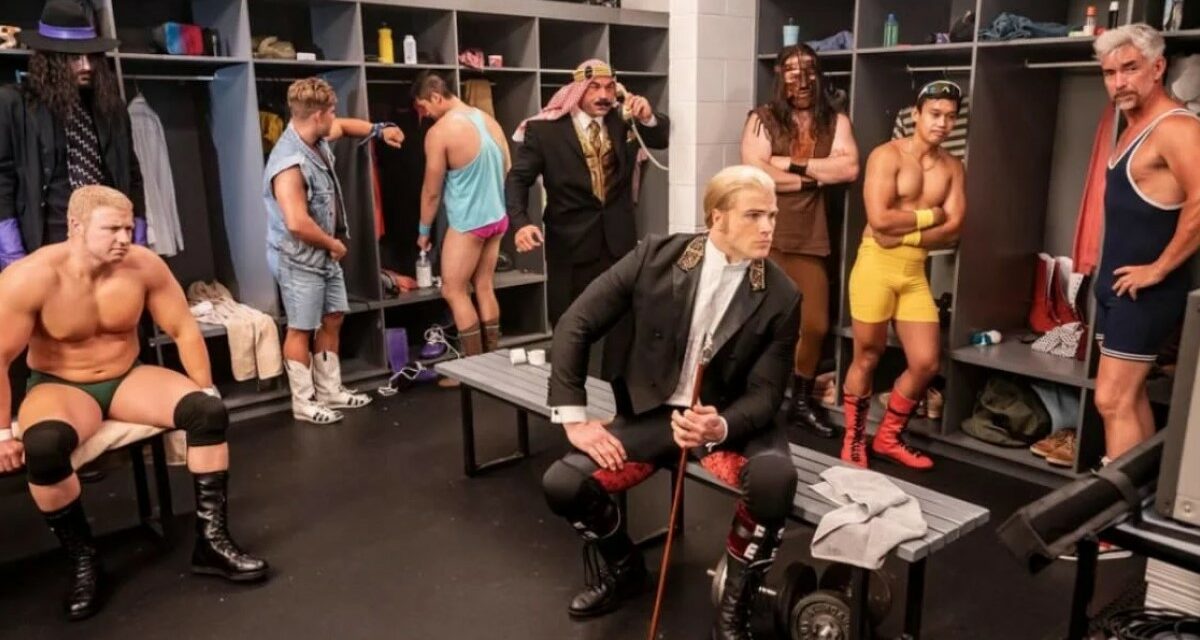 With his hair tousled up and his million dollar smile ready to dazzle, Dwayne Johnson arrives for his WWF try-out match in this week’s episode titled “Corpus Christi.” As Johnson arrives in Texas to take on “The Brooklyn Brawler” Steve Lombardi in a dark match before Monday Night Raw, he’s on the cusp transforming his life completely from football to wrestling, though it naturally feels as if he’s been destined to follow that path all along.

When Pat Patterson gives Dwayne the details over the phone, Johnson says “Yes” to just about every question even when the answer is really “No” — and this includes whether Dwayne has his own ring gear. He calls in some family favours, borrowing a pair of his dad Rocky’s “too small boots” and a set of “too big trunks” from his uncle, King Tonga (AKA Haku in the WWF).

Tonga also has some advice for his nephew before setting off on his WWF journey: “People are going to want to change you – remember who you are.”

Pretty well everyone that Johnson interacts with on this day is taken aback by the fact that this is going to be his first match — ever. And the people he chats with? Well, it’s a cavalcade of mid-90s WWF stars, with a focus on those that would end up working some of the biggest feuds and matches in the company’s history alongside Johnson.

The Undertaker, Mick Foley as Mankind, Hunter Hearst Helmsley, and Steve Austin, who at that time was The Ringmaster but not far at all from being re-branded as “Stone Cold” — they’re all there. Foley’s doppelganger, Brock Dunstan, has the benefit of the mask over his face to aid in the suspension of disbelief, and Undertaker as played by Josh Rawiri has similar help from this hair covering his face, too, while the actors portraying Lombardi and Austin each bring some serious wrestling credibility to the roles.

Austin is played wrestler/actor Luke Hawx, with his tattoos covered up, blond hair on his head, and a darn good impression of Austin’s drawl to complete the character. Playing The Brooklyn Brawler, including getting in the ring with Uli Latukefu’s Dwayne, is Colt Cabana with his own gruff take on Lombardi’s voice.

We also get a look at Mantaur, a mid-90s bad idea in the WWF who has trouble getting through a doorway with his giant boar’s head. I think it was a boar. There were plenty of other superstars-in-waiting, and plenty more bad ideas, too, but these selections are emblematic enough for us to get the lay of the land.

Back at the Johnson home, Rocky, Ata, and Lia are looking for a way to keep up to date on Dwayne’s match, and their first effort is a familiar one to 90s wrestling fans as they log on to the WWF AOL message boards. Now, in reality, this couldn’t have possibly worked because, kids, nobody had real-time access to the internet from their seats back then, and the message boards were places to vent and celebrate after the events were over.

Regardless, they do get online and Rocky introduces himself, getting an immediate response from “The Ultimate Warrior”. As Rocky banters with a teenager assuming Warrior’s online identity and spouting all sorts of cosmic mumbo-jumbo, we get our first peek at the perils of online fan interaction.

A better idea by the Johnsons is connecting with The Iron Sheik, who is back in the WWF as a manager for The Sultan (who would be better known later as Rikishi, a distant cousin of Dwayne’s). The Sheik provides play-by-play of the match as best as he can, at least when the jabroni Mantaur isn’t blocking the view.

Before the match, Dwayne has quick interactions with Vince McMahon, Michael Hayes, and Bruce Prichard, with Hayes reminding Dwayne he has six minutes for the match, including entrances, and Prichard picking out some pretty lame sounding entrance music. Still, Johnson enters like a boss, feeling great until he gets a “Who the hell are you?” from a front-row fan, which takes some of the skip out of his step. Even worse is when he sends Lombardi in the air for a big backdrop and pumps his fist to … zero reaction from the crowd.

“Leaning in” to what Rocky taught him in their training sessions, Dwayne sells a headlock like his brain is about to burst, getting a little something from the fans. He pulls out some acrobatic moves and is rewarded with a little more energy from the crowd before he uses a sunset slip to get the pin and the win, making the most of the six minutes that he says will change the course of his life.

Backstage, Lombardi and Patteron are suitably impressed, and Vince sees enough to bring Dwayne in for a meeting. He lets him know that he sees his potential, but also that he’s not ready for the WWF. He’ll go to Memphis and get some experience, with the promise of returning to New York when he’s ready.

Luckily, Dwayne has someone to stay with, and he shows up at Bruno Lauer’s trailer, making Lauer one of the few characters to appear in all three timelines (all four, if you count the real-life Lauer’s cameo in season one).

Naturally, the episode features some time in 2032, as presidential candidate Dwayne Johnson is three days out from the election but suffering from food poisoning. Randall Park stays by his side while Johnson reminisces, and Park’s best moment sees him get caught up in the format and start telling his own flashback story of being at UCLA in 1994, about to perform in an all-Asian production of The Hudsucker Proxy. We get about ten seconds of this flashback before Johnson calls him out on flashbacking on Dwayne’s time.

The 2032 segments are usually the weak link of the show, but this was a good episode for that timeline. Still, there’s no doubt that the 1996 entry into the WWF was a moment that a significant part of the fanbase has been waiting for, and it’s actually pretty gutsy that the show waited until an uncertain second season — and halfway through that second season, no less — to get there.

There will only be a couple of episodes left in this season for this era, so we can expect to make it to Johnson’s debut at the 1996 Survivor Series show, or maybe that’s something that the production team is holding onto for a potential third season.