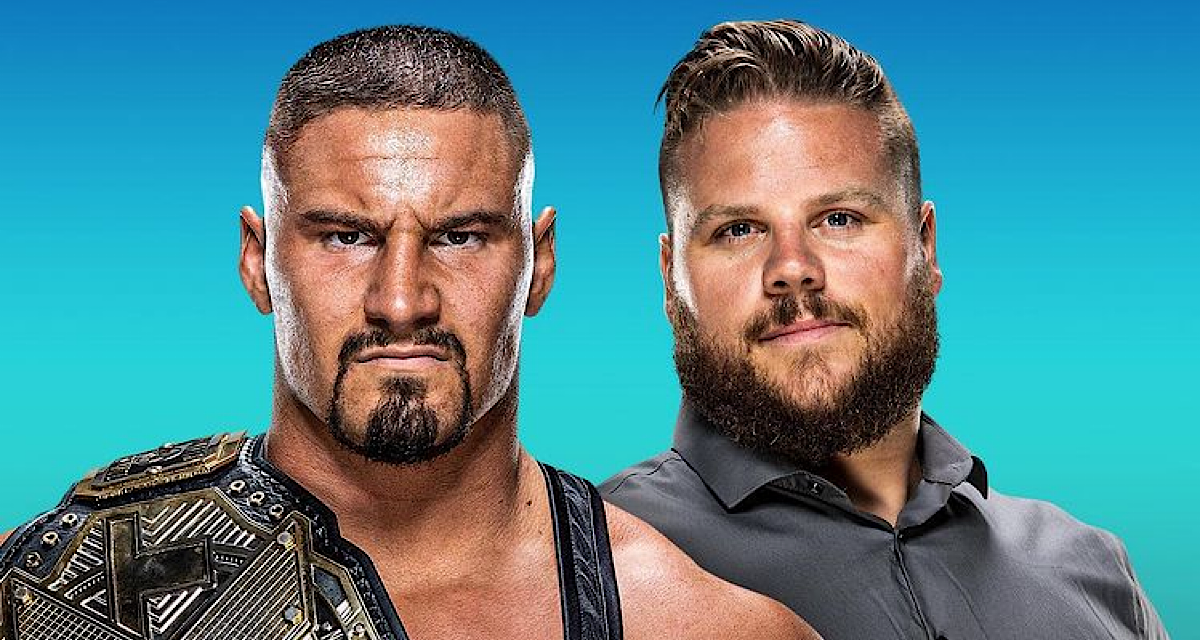 While a number of NXT talent were sent packing this week, the remainder of the roster is Spring Breakin’. With appearances from the main roster’s Viking Raiders and Natalya, tonight’s festive card is headlined by an NXT Championship matchup between challenger Joe Gacy and champion Bron Breakker. Roderick Strong, on the other hand, isn’t allowed to leave the hotel.

The “Solo” chants are hearty while Grimes unwarrantedly gets no love; it’s a fickle bunch in Orlando. Meanwhile, Hayes delivers some crisp springboard offense as the competitors trade maneuvers heading into picture-in-picture. Sikoa, who commentary insists “grew up on the streets,” sends the opposition down with a Tower of Doom as “this is awesome” chants erupt. He hip-attacks his stacked opponents and powerbombs Hayes before Grimes breaks the count, and the latter makes a comeback thereafter. Hayes catches the Cave In in mid-air, and Sikoa follows suit with a catching superkick. He scales the ropes and hits the top-rope splash, but Hayes’ breakup sends the audience into legitimate frenzy. Finally, with Hayes on Sikoa’s shoulders, Grimes connects with a top-rope Cave In to retain his championship in an extremely energetic triple-threat opener.

Earlier today, NXT Women’s Champion Mandy Rose was filmed getting a tan as Wendy Choo snuck in to crank the knob. She returned to Gigi Dolin and Jacy Jayne burnt and embarrassed, apparently unaware of the camera crew. So why was the crew there anyhow? Where were the attendants to stop Choo? Important questions, people – that NXT clearly doesn’t take into account.

Nathan Frazer is hyped in his backstage interview, saying, “I’ve been waiting for this moment literally my entire life.” It’s exactly what everyone else says.

Hashtag free Roddy. Roderick Strong gives a lecture to Diamond Mine’s Creed Brothers. The tag team, and Ivy Nile, are fed up with their leader much like Strong is fed up in general.

Widow and widower Indi Hartwell and Duke Hudson dejectedly meet in the locker room after losing Dexter Lumis and Persia Pirotta. Hudson goes in for a kiss. “Oh hell no,” says Hartwell. Less is more, and that was perfect.

After making waves a couple years back, Frazer finally makes his NXT US debut. Chase University watches on as Waller stifles the momentum and shreds a stage-set beachball before picture-in-picture. Speaking of waves, the fans are doing the wave as Frazer becomes a “human missile” through the middle rope, thereafter catching Waller with a superkick. Waller pushes Frazer off the top rope, but Andre Chase distracts the former with an airhorn. This allows Frazer to connect with a beautiful Phoenix Splash for the pinfall victory.

A vignette for Fallon Henley shows off – not her wrestling skills but – her love of horse riding. She’s been entered into the Women’s Breakout Tournament.

Inside of Fresco, an Italian restaurant, Legado del Fantasma meets with Tony D’Angelo, AJ Galante, and his crew. Leader Santos Escobar offers to “come together and share business,” and the two make a peace agreement. As D’Angelo’s group leaves, Escobar says, “Cruz, start the car.”

The Viking Raiders are interviewed backstage, but they’re interrupted by the NXT Tag Team Champions Pretty Deadly. The champions call the Creed Brothers “damaged goods” and wish the opposition luck.

Somewhere dark, Joe Gacy vows to “change the world” as he challenges Bron Breakker for the NXT Championship tonight.

Nikkita Lyons and Cora Jade vs Lash Legend and Natalya

Fan favorite Lyons impresses with a chain sequence with veteran Natalya before “rough gem” Legend tags in. They spill to the outside preceding picture-in-picture, where Natalya eventually gains back control. Lyons receives the hot tag, showing an immense improvement in her short time on the roster. Natalya inadvertently kicks her partner, and the top-rope senton from Jade gives her team the victory.

Tatum Paxley talks about her powerlifting background in her vignette for the Women’s Breakout Tournament, which begins next week.

The Viking Raiders vs The Creed Brothers

Big meaty men are slapping meat as the absolute units in Erik and Ivar power through the opposition. Ivar squashes Brutus with a splash on the floor before picture-in-picture, but Julius makes the comeback for his team. The Viking Raiders pull off some creative maneuvers, especially for their size, but Brutus continues to fight. Julius leaps to the top rope and delivers a giant superplex to Ivar, who recuperates with an amazing spinning kick. Brutus breaks the pinfall after the Raiders’ tag finisher connects, and with unseen help from Roderick Strong outside, the Creed Brothers reluctantly gain the pinfall victory.

Santos Escobar talks to AJ Galante in the parking lot – well, he and Legado del Fantasma kidnap him in their SUV. “That may be the last we ever see of AJ Galante,” says commentary nonchalantly.

Earlier this week, doctors told Brooks Jensen that his strong right arm may have saved him some injury time. “Is there a particular reason that your right hand is stronger than your left?” asked doc.

After Gacy kidnapped Rick Steiner, and hid Harland somewhere too, tonight’s main event presents the culmination of weeks-long mind games and ridiculousness. Gacy gains control with an outside lariat preceding picture-in-picture and grins upside down like a siamese cat. With a Uranage directly after, it’s hard not to draw comparisons to another world-eating cult leader – except this one is clearly the discount version. Two druids are watching amongst the crowd as Breakker connects with a bulldog and Frankensteiner. The champion kicks out of an Alabama Slam and powerbomb, thereafter connecting with a spear for the clean pinfall victory. The two druids appear on the apron as the lower third appears, ending tonight’s episode on a cliffhanger.

This was actually a really strong show. The crowd seemed hot throughout (shoutout to the front row guys in Hawaiian outfits), which helped some already solid in-ring action.