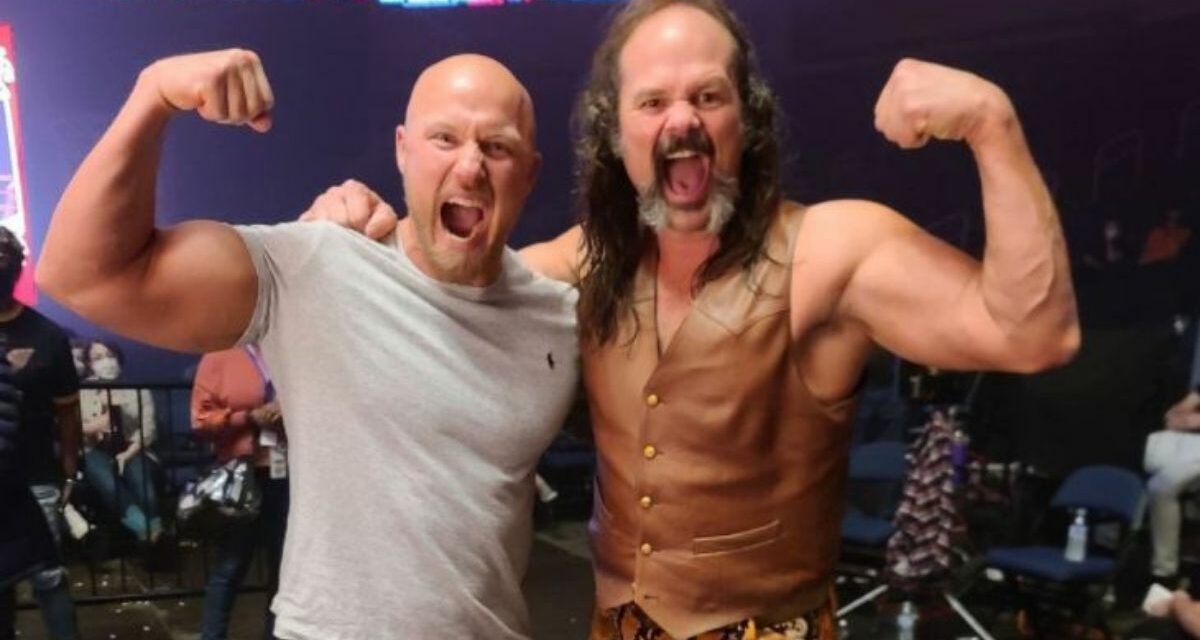 Over the years, Luke Hawx built a good reputation as a pro wrestler, but it’s nothing compared to the standing he has now as one of Hollywood’s most in-demand fight coordinators.

And sometimes, there’s a good mix of his dual lives, like on the set of the Steven Amell series, Heels.

That he’s gotten to bring his son, Perry, and students from his Wildkat wrestling school along on the ride has been a bonus.

Luke and Perry addressed the movie business in a SlamWrestling.net interview at the Georgia Public Broadcasting center in Atlanta, where the NWA was shooting four days of television, December 3-6, 2021.

“It’s been our main thing. We love wrestling and we wrestle a lot, but we’re at the point that where we have too big of offers coming in from films that we can’t take indie bookings anymore,” said Luke Hawx (Owen Hawxhurst).

Though home, and WildKat Wrestling, is in New Orleans, the Hawx boys got a place in Newton, Georgia, just outside Atlanta, for all the film work that has been going on in the area.

“We’ll come out to Georgia in a couple months to start season two of Heels, just prepping for that. Perry’s gonna take over,” revealed Luke. “I’ve got another project I got going on, out of the country, so I’ve got to go handle that. And Perry’s gonna take over on the coordinating side of Heels until I get back and then we’ll swap.”

There’s a lot of Wildkat in Heels. The Hawx father-son team — Luke and PJ are known as Hawx Aerie on the wrestling scene — coordinated the fight scenes as “wrestling coordinators,” and brought many wrestlers they knew on to the set, as well as acted themselves; PJ was Denny the Ref, and Luke was The Hole. That included relative unknowns, like J. Spade (Michael Thompson), who also recently debuted on NWA USA, or the at-the-time retired CM Punk.

Luke Hawx has been good at keeping friendships made through 22 years wrestling. One was Punk, who was a young Perry’s favorite wrestler. “When Punk came on the set of Heels, he asked me first thing, ‘Where’s Perry at?’ He said, ‘I want to retake this picture they took when Perry was a little kid.’ Then they’re working together,” said Luke. Punk was Ricky Rabies on Heels.

It was way back in 2006 when Luke Hawx got into film work. He was Altar Boy Luke in MTV’s Wrestling Society X, and one of the other wrestlers, Vampiro, was shooting a film in Mexico. The learning curve began there, and Hawx took classes in stuntwork for a couple of years, and studied.

You’ll see him in huge projects, like Logan, where Wolverine puts his claws through Luke’s skull, and The Fate of the Furious, but also on smaller projects too, like TV shows and documentaries. The stuntwork and fight coordinating is meant to be a little more invisible, where you might not know who was putting in the work.

Terry Funk was an inspiration, as he made inroads into acting while still wrestling. But Hawx realized there was more to it than the on-screen Funker. “One thing I’ve always thought was really cool about Terry Funk was he was in films, he popped up in Roadhouse, and this film, and that film,” said Luke. “Then I read, ‘Oh, well, he was doing that so he could keep his insurance because he didn’t have health insurance from wrestling.’ And obviously, film pays a lot more than wrestling does.”

Getting into the Screen Actors Guild was a huge difference-maker.

“We can make a living off wrestling, but I’m securing my future with film work,” said Luke.

Learning is key for Perry, who is finishing off his studies at the University of New Orleans. He’s also still relatively new in the wrestling business, at age 23, and is being schooled in stunt and film work by his father.

The film work “wasn’t something that originally I thought I was going to do. I knew I always wanted to be a professional wrestler,” admitted Perry. “But when I had the opportunity, I took it and I did pretty well, I would say, and it’s something that I’m learning to enjoy. I’m practicing, I’m training, it’s currently something I was doing this semester in my college, I took an acting class, just so I can continue improving my skills. But I’m always trying to get better at whatever craft I’m doing. I’m enjoying it as well. It’s a lot of fun. I’m starting to have as much passion for film and stunts as I am at wrestling.” 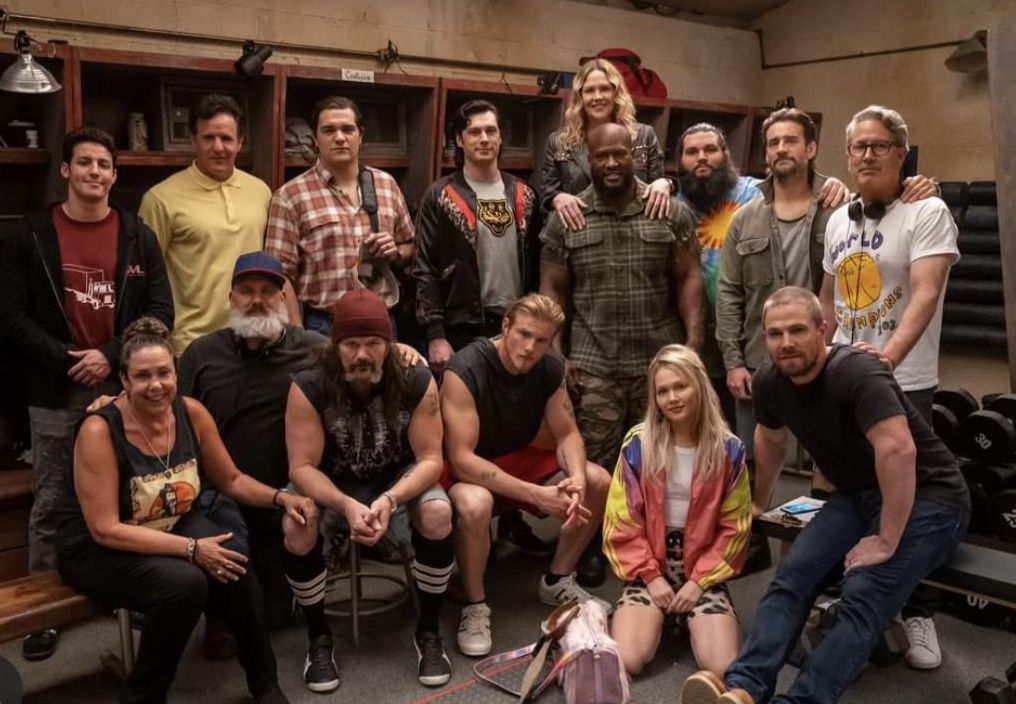 Luke Hawx is thrilled to have his son alongside. “I’m doing everything with my kid, which is a blessing,” he said.

Getting others into the film business is a bonus. “It’s so good to reward the guys who have been with you since day one, grinding and working hard and just believing in your product and your mind, that you’re able to reward them for working so hard and giving them these cool opportunities to be in a television show and get paid really, really well. That’s the best thing in the world because you change people’s lives.”

“Wild Card” J. Spade is a specific example. “He came to our school to be a professional wrestler. He ends up getting in the movie business as well, because we add him and now he’s a full time stunt double on several TV shows, and he’s making a full time living doing that,” explained Luke Hawx. “I have several other wrestlers at WildKat doing that, and that’s the cool thing about WildKat, is we are the only wrestling school that also involves you in film. … I’ve probably gotten at least 25 guys, wrestlers, SAG cards this last year.”

It helps that Hawx has solid help at home. “Outlaw” Matt Lancie has been the main trainer at the school for a while now, but hasn’t been able to do the film work. “I’m the one filling in for everybody and making sure everything’s till running. That’s great, Luke and J. and all these guys get out there and make some names for themselves as well as WildKat,” Lancie said. “For the most part I’m here making sure we keep having the next crop of students come through and get the next performers for the shows.”

I’m the one filling in for everybody and making sure everything’s till running. That’s great, Luke and J. and all these guys get out there and make some names for themselves as well as WildKat, and everything else. If I get the opportunity to go out, I will. We have some guys that we have in place that can pick up some slack for a little bit if myself goes out there and does some stuff with the guys. But for the most part I’m here making sure we keep having the next crop of students come through and get the next performers for the shows.

In Heels, Spade is the stunt double for Allen Maldonado who played Rooster Robbins.

“I hate giving Luke credit, I hate, I hate it, I truly do hate it — but he has given a lot of people opportunities inside WildKat and even outside of WildKat too,” said Spade. “Me and him, we always have our squabbles, my life’s mission is to make sure his life is more uncomfortable by the day. But I can’t downplay the hard work he puts into helping guys out and giving them the opportunity to better their career or their lives.”

Spade mentioned Kaleb Konley and Zane Riley as two more names Luke helped get into film work. “He looks for guys who are hard workers.”

Since Spade trained with Luke Hawx, he has gotten to see PJ grow as a person and a wrestler. He thinks that PJ has a gift, and saw it as PJ instructed the cast on Heels as a wrestling coordinator. “Just watching him teach the actors how to wrestle, how to fall down properly, how to do a suplex properly, has just been remarkable because it’s one of the same things that he does at WildKat sports, whenever we have new students coming in,” said Spade. “He does have that coach-type spirit really, it’s not a mentality, it’s a spirit with him. He is very patient when it comes to somebody not knowing everything, how to break it down to them properly. So just kind of watching him coordinate and help structure the wrestling scenes on Heels has just been great.”

Heels season two is coming up, and the Hawx boys will be there, by choice. And the senior Hawx knows that they are privileged to be able to pick and choose.

“Big companies came knocking, when WWE and this company wanted to offer you something, I was already doing so good in film, and not only was I doing so good and film, I was able to bring my team up with me and have them benefit off of it. I couldn’t leave, it was just too sweet of a position for me to leave and go anywhere.”

WANT TO BE ON HEELS?

As we start prep for Heels season 2,
We are accepting submissions for potential wrestlers, stunts, and extras throughout our season. Those who would like to submit, please submit the following:
1. Full name & wrestling name (if different) & Current living location
2. LEGIT height, weight, and ethnicity
3. Professional promo picture & Current selfie
4. Highlight video
5. Resume
Please submit to HeelsWrestling@gmail.com
in subject line: “Attention Luke and (add your background/skill)
PLEASE SUBMIT ALL OF THE FOLLOWING LISTED ABOVE TO BE CONSIDERED.