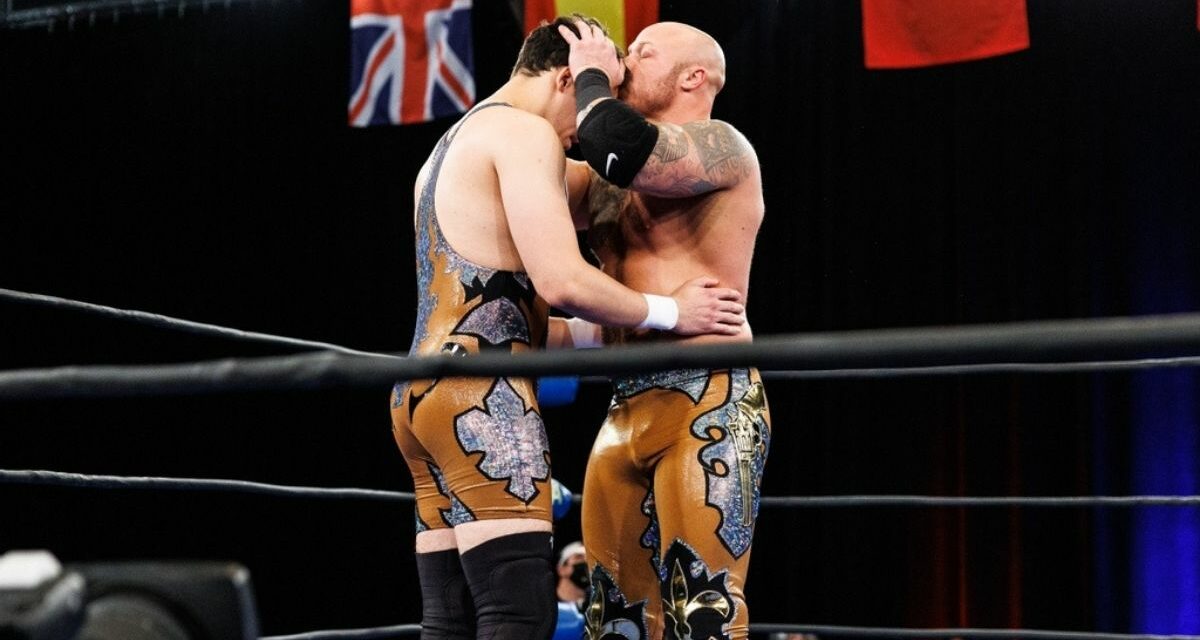 Luke Hawx has had plenty of roles, from Altar Boy Luke on a national wrestling promotion to countless appearances on TV and in movies. But the role he is most proud of is being a father.

It’s very evident sitting down in person with Luke and his son Perry, known as PJ Hawx in the ring.

They have a comfortable rapport, both joking and loving, and more than once, father moves out of the way to let his son tell the story.

The scene is backstage at the Georgia Public Broadcasting center in Atlanta, where the NWA was shooting four days of television, December 3-6, 2021. They have been hanging out for days, waiting for their moments to do promos and wrestle. The highlight was their father-son battle on the very first episode of NWA USA on YouTube, a match won by Dad. Their other work together, on movie and TV sets as stunt and fight coordinators, is less well known. 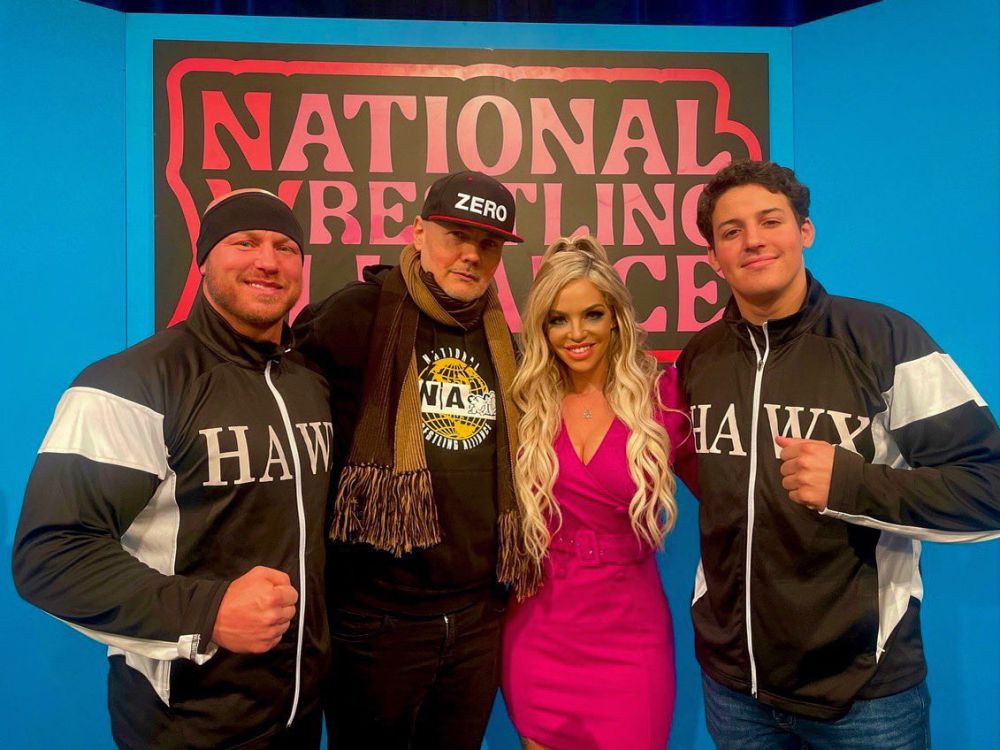 Luke Hawx, Billy Corgan, May Valentine and PJ Hawx at the NWA tapings at the Georgia Public Broadcasting center in Atlanta in December 2021. NWA Photo

Luke—born Oren Hawxhurst in 1981—is eager to talk, while Perry J. Hawxhurst, all of 23, is a little less comfortable with the recorder on.

The first question is obvious: What’s it like teaming with your father?

“This is one of my favorite things to do in the entire world,” began PJ Hawx. “I grew up watching my dad, I remember going to shows, I’m three years old, watching him and he’s my superhero, man. He’s my coach now, and there’s no greater joy. I’m watching my my coach go out there and kick ass and now, I’m doing the same thing too. He’s still young, he could still go, he looks like a million bucks. And I’m getting there myself. So it’s just a pleasure to do it with him.”

Luke Hawx broke into the business in 1999, after training with Vic Grimes. He was Perry Douglas to start, and then settled into his well-known Altar Boy Luke gimmick, which he used in Xtreme Pro Wrestling and Wrestling Society X. Along the way, he’s had experiences with all the major companies, and traveled internationally. The WildKat Sports & Entertainment wrestling school and promotion began in June 2011 in New Orleans, along with Orlando Jordan.

Born in New Orleans, PJ competed in amateur wrestling at Grace King High School in Metairie, Louisiana. He’s a touch taller than his father—maybe it’s the hair?—and is hard at work polishing his physique to compare with his dad, adding weight. “He’s killing it in the gym,” said the proud papa. PJ is also studying exercise physiology at the University of New Orleans, and is a senior with just a couple of classes left to graduate. He actually completed the final of a course remotely just before the NWA pay-per-view, Hard Times 2, went live. 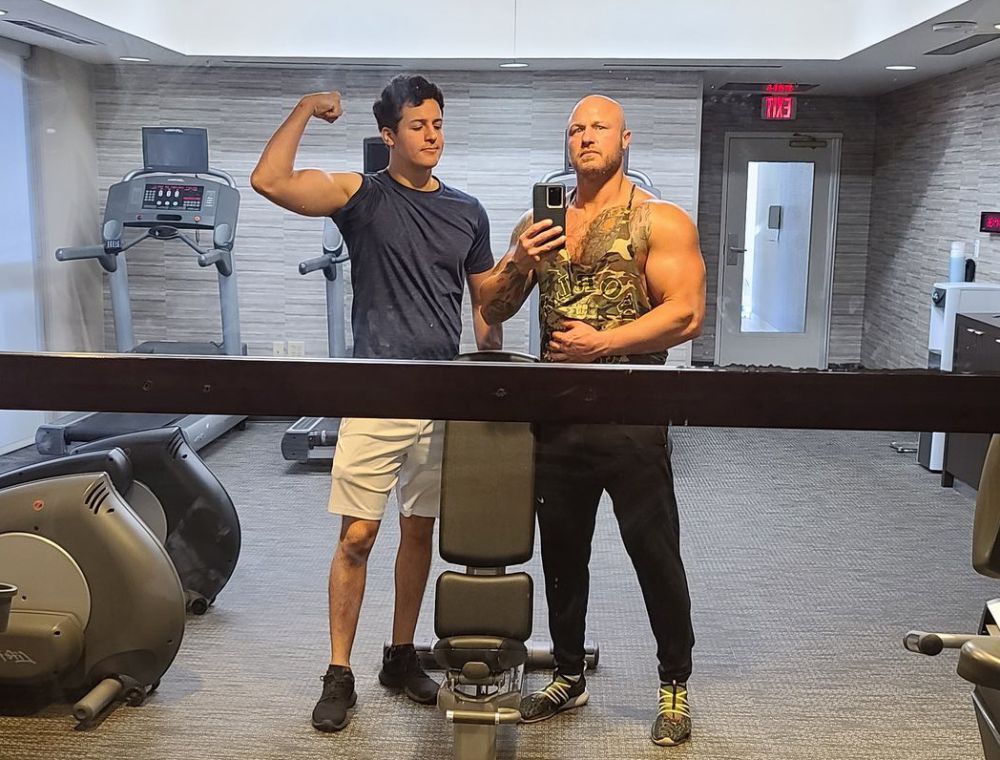 During the NWA tapings, PJ compared notes with Kerry Morton, son of Ricky Morton of the Rock ‘n’ Roll Express, as Kerry is also in college too, and in the early days of a promising wrestling career.

“People don’t realize how much college is a full-time job,” said PJ. “It started to come to an issue in classes where my wrestling bookings started to get busier, and I started to do more films and I wasn’t paying attention in school. It caught me.” He doubled-down and does his work where he can.

Luke can only shake his head at his son’s commitment. “He was on his computer working,” he marveled. Later, after the PPV, “everybody’s partying, we’re hanging out in the lobby. Dude’s hanging with us, but he’s on his computer.”

The commitment carried over to his pro wrestling training. PJ Hawx officially debuted in 2017, though he’d been training for a while with his father.

Training his son wasn’t any different than anyone else, swears Luke. “When you’re with your father, it can get a little frustrating with each other. It’s just the truth. So I think he picks up more on my mannerisms,” he said. “I watch what he does, and it doesn’t take him long to pick something up and perfect it, actually. He works so hard. I know that when he does something, he gives 110%.” 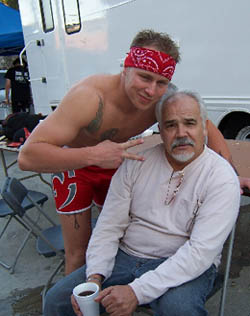 There’s an element of innate knowledge, said Luke. “Sometimes, I can’t even tell him anything, because he knows already what he did wrong. It’s just one of those things where I don’t have to be as tough on him, because I know he’s working and giving 110%. All you’ve got to do is tell him what you want him to do.”

The wrestling world is full of second-, third-, and even fourth-generation wrestlers. PJ grew up around it. “I knew what to expect. But also I knew how hard he worked, his background, he came from nothing. He worked for everything, and he earned everything he got. He’s still doing that today,” said PJ. That work ethic is part of his DNA. “I’m not trying to get an easy pass just because, ‘Hey, this is what my dad does.’ No, I know I have to work hard, and I’ve got to earn my keep, just like he did. I wouldn’t want it any other way.”

The discussion of PJ’s start in the business has Luke reminiscing. He had no support system.

“When I was coming up, when you said you wanted to be a pro wrestler, they’d tell you, ‘You’re f***ing stupid. You need to get a real job. Stop having these stupid dreams.’ … I can literally probably count on less than one hand the people who supported me and told me to go after it,” said Luke.

Naturally, the family thought of the worst days that Luke went through when PJ wanted in. “With him, I know his grandma wasn’t really too happy about him getting into wrestling, but she supports it now. More so, they knew he was intelligent, so they wanted him to go to med school or something and not be this body,” said Luke. “They seen the stuff I went through, with no health insurance and getting banged up and doing death matches back in the day. Obviously they thought that was what he was going to fall into, and then when he jumped off the mall, she was real pissed.”

Wait, back up, jumped off a mall?

For those that missed it, in February 2020, just before the world shutdown with the global pandemic, the Hawx-run Wildkat Sports Wrestling promotion put on a free Sunday show at the Esplanade Mall in Kenner, a New Orleans suburb. PJ Hawx made his way to the second story of the mall, and jump from there into the ring, landing on three wrestlers (one of which was his father). It went viral, and was even played on ESPN SportsCenter.

The notoriety continued at university.

“They interviewed me at UNO, and they put out the article, and then my professors started putting it out there. … ‘Oh, check out our PJ’s article.’ My friends are always like, ‘Hey, this is the guy that jumped off the second story of the Esplanade Mall,’” laughed PJ. “‘Ugh, yeah, that’s me.’ Of course, I love this. I know it’s all showboating and stuff like that, but sometimes, I’m just trying to go to class and go home, go eat. But it’s fun, man.”

The momentum for Wildkat was curtailed by the pandemic; the promotion’s last show before shutdown had well over 2,000 people. “I’m just glad that the exposure [the jump] gives to Wildcat because that is our bread and butter back home,” said PJ. “We have killer shows. Unfortunately, because of COVID, we’ve had a hiatus, but we’re looking to come back strong. And it’s just good to promote that, so when it’s time for us to come back that, we’ll have more and more people come to the shows.”

There have been plenty of people to learn from along the way for PJ, uncles of sorts in the business.

“He earned a reputation for his amateur wrestling in high school, and I always would post about it,” said Luke. His wrestling friends would ask about PJ, and soon enough, they were in the ring with him too. “He loved Zack Ryder, and we just wrestled Zack Ryder in Alaska, and Curt Hawkins,” recalled Luke. “When he was a teenager, he dressed as Fandango for Halloween, and I sent Fandango the picture a long time ago — he’s my boy, we came up together — so tonight, we did a promo with him and but he was talking about, ‘Remember in 2014 when you sent me that picture of Perry dressed as me?’ You get all these really cool life interactions that a lot of people, they’ll never know or get the experience.” 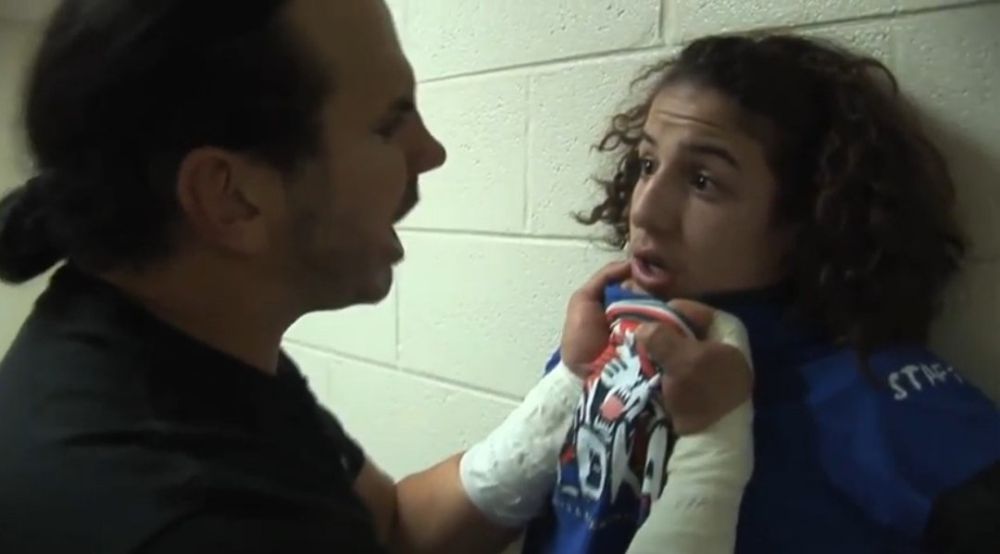 PJ wants it clear that he isn’t trying to ride his father’s coattails. “I realize that this is a completely different life than he lived. But I’m also getting this opportunity, and that’s also why I want to work hard because I know that this doesn’t come often,” he said. “That’s why I want to put in the work and do everything I can to make sure that I’m doing the best that I can.”

The father-son team is going by the name Hawx Aerie.

“I wanted to be original, and I wanted to be unique. So I started Googling things and looking for different meanings of hawk’s nest,” said Luke. “I thought Hawxs Nest is cheesy, right? It’s been done. It’s kind of PG — I’m not a real PG guy. But aerie? Hawx Aeire, this sounds pretty badass. People aren’t going to get it, but once they learn what it is, they’ll be like, ‘Oh, that’s intelligent.’ That’s where I found it. I called him up, and I was like, ‘Hey, I’ve got a name.’”

PJ remembered saying, “Well, that couldn’t have been any more perfect.”

Hawx Aerie is not the only regular father-son tag team in history—that was probably Gino Garibaldi teaming with his son Leo in the 1930s—but they do have promising longevity given how early in Luke’s life PJ came along.

“I want to make a full-time run,” said Luke, assuring that he’s got years left of him in the ring. “It makes it so much fun now, to, because it’s like, ‘Man, everybody’s got the thing and I want to get in there with all of them.’ And I want to work with Billy [Gunn] and his sons. We’re working with Ricky and Kerry [Morton]. Anybody and everybody. We did the father-son international thing and Mexico and in England, we did the Knights versus the Hawxs, versus 666, Damián [666] and Bestia [666]. We’ve had these cool father-son moments. I want to work with all these other father-son tag teams. It’d be cool to work Rey [Mysterio] and Dominick … wouldn’t that just be a sensational thing?”

TOP PHOTO: Luke Hawx gives his son, PJ, a kiss after beating him in a match on an NWA USA program. NWA Photo