Matt Cardona a master of reinvention 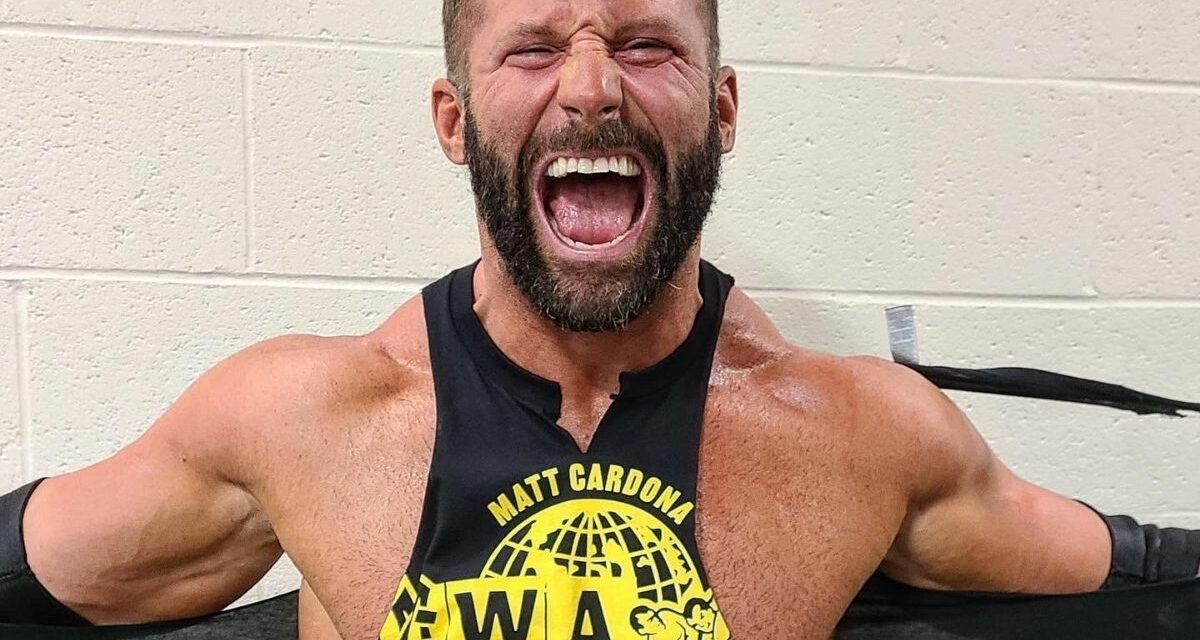 Matt Cardona shocked many people by showing up at the NWA Hard Times 2 pay-per-view, on December 4th, inserting himself into the NWA World title picture, helping Mike Knox lay out the champion, Trevor Murdoch.

But if you have been following the pattern of his wrestling since his no-compete clause from WWE expired after his release in April 2020, it makes sense.

Backstage at the Georgia Public Broadcasting center in Atlanta, where the NWA was shooting four days of television, December 3-6, Cardona talked to SlamWrestling.net about his current mindset.

“What I love is, I hate using the term free agent but I am — I’m not signed anywhere, I can show up anywhere. I think that’s what makes wrestling fun. Nobody predicted I was going to show up Hard Times 2, and just to be there,” Cardona said. “In this day and age, social media presence is important and to see people are like, ‘Oh my, what’s he doing there now?’ And that’s how it was when I showed up in Impact or GCW. It’s just a lot of fun because I’m doing things that I would want to see as a wrestling fan.”

The word “fun” comes up often in the conversation, to the point that he said that “2021 was the most fun I’ve ever had in my career.”

Those are big words for someone who was a WWE star as Zack Ryder, who had his WrestleMania moments, won titles, used momentum that he created on his own to force the company’s hand to push him. 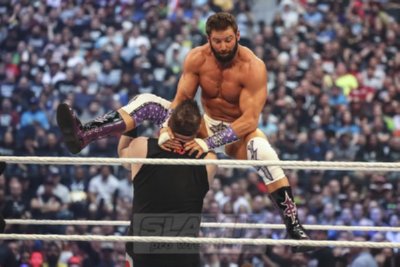 Zack Ryder at WrestleMania 32 during a ladder match where he eventually won the Intercontinental title. Ricky Havlik photo

Cardona said to not look for any rhyme or reason in the way it’s all gone down, from stints in AEW and Impact, to indies and more.

“Listen, I say I’m always ready, and I am, but there wasn’t this master plan. Like I didn’t wake up January 1, 2021, and say, ‘Okay, I’m gonna do this deathmatch.’ Things just fall into place. That’s life,” he said, referring to a now infamous Game Changer Wrestling deathmatch against Nick Gage in July 2021, where Cardona won the GCW World Championship. “But you’ve got to be always ready for opportunities, and when they present themselves, you’ve got to capitalize and that’s what happened. That deathmatch with Nick Gage kind of fell into my lap. I believe that in wrestling, sometimes you actually do have to give the fans what they want, and enough fans wanted to see it. I knew it would create buzz. I could never have predicted how much buzz it would create — and I’ve been running with it ever since.”

Buzz can also be taken as feedback, and his responses can be seen as trolling those fans who don’t think he deserves it, especially since he had never done the hardcore style previously.

“I am the Deathmatch King, but I’ve retired from deathmatch wrestling. I beat Nick Gage, who was the tippy-top, and that’s it. I don’t have to do that stuff anymore,” Cardona proclaimed. “And now here in NWA, why am I here? I’m here for opportunity, I can just, I sniff out that opportunity, and I come and capitalize on it.” 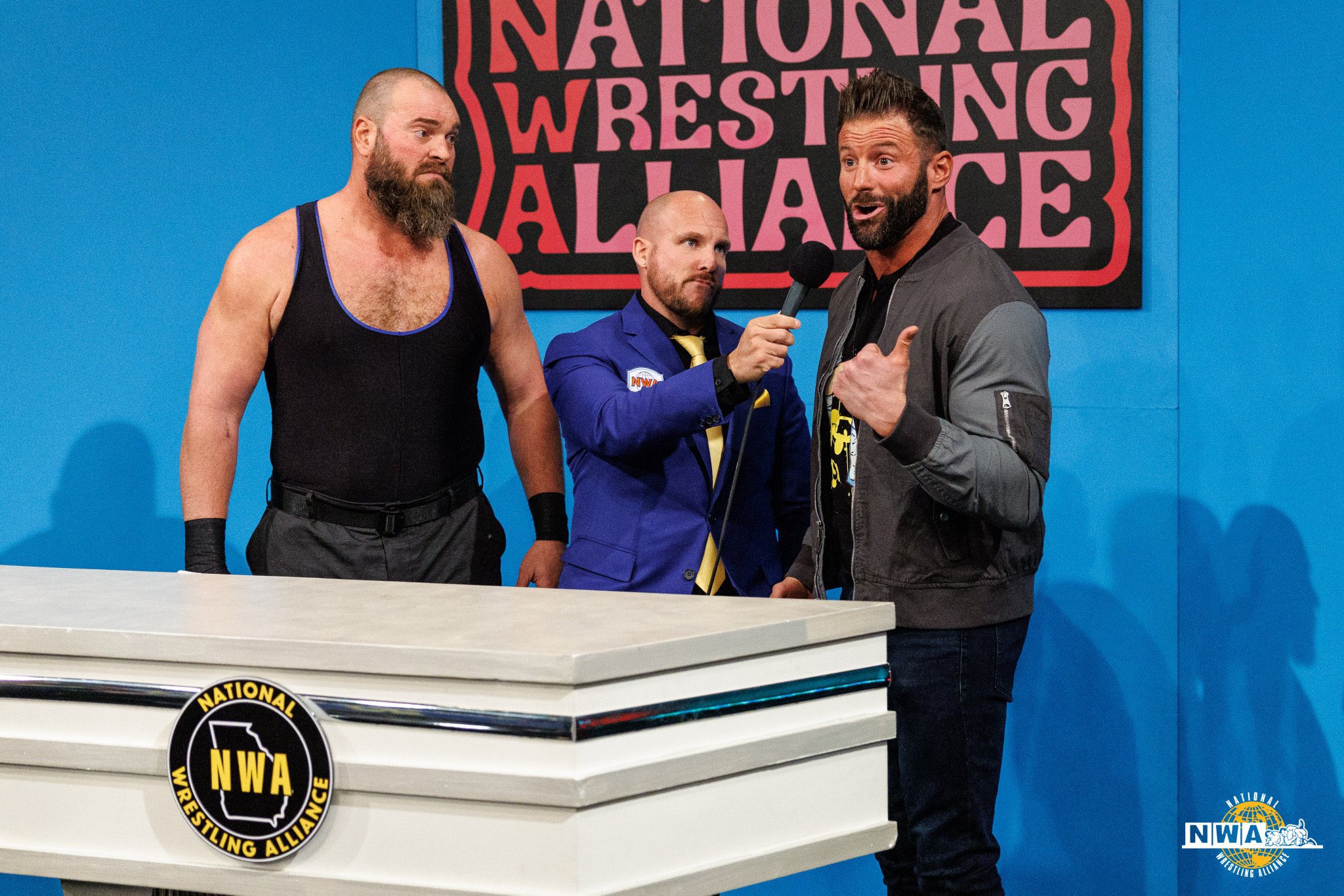 On December 8th, Cardona tweeted that “WWE was my developmental” which sums up why it feels so different seeing him out on the “indy” scene. Others scratched and clawed their way to WWE, eating their tuna sandwiches and struggling along the way, but honing their craft too. Cardona was in WWE developmental within a year of starting in the business.

“Of course, there are some shows now where it’s not the best crowd — welcome to the indies, right?” he chuckled. “Now it’s fun. I love that I can be at this sold out GCW show on a Friday, as the Deathmatch King and have all these fans hate me, and then the next day, I can be in West Virginia and I get to be the babyface, doing a spot where I get on the mic and call the heel a chicken. I love that I can just do everything.”

Curtis Hussey, who was Fandango, and now wrestles as Dirty Dango, is a fan of what Cardona is doing. “He’s staying relevant and creating a character that can jump from different companies, which is really cool. And it shows a lot of guys and girls that have been released that there is life, you do have a career after WWE if you want to get out there and bust your ass. And Matt’s a perfect example of that.”

Cardona said that he hasn’t really been surprised by anything on the indy scene so far. “I’m definitely learning as I go, but I like being in control of my own destiny, and controlling my own fate. And not to say everything I do is going to be a success, absolutely not. I’m not saying that at all,” he clarified. “For instance, I’ve learned, at these conventions, I want to be my own vendor. I want to vendor myself, I don’t need somebody else flying me in and putting me up and paying and getting some of the money. No, I want all the money, I want to take the risk because I want all the reward. And I don’t just feel that about a convention. I feel that about the business and life.” 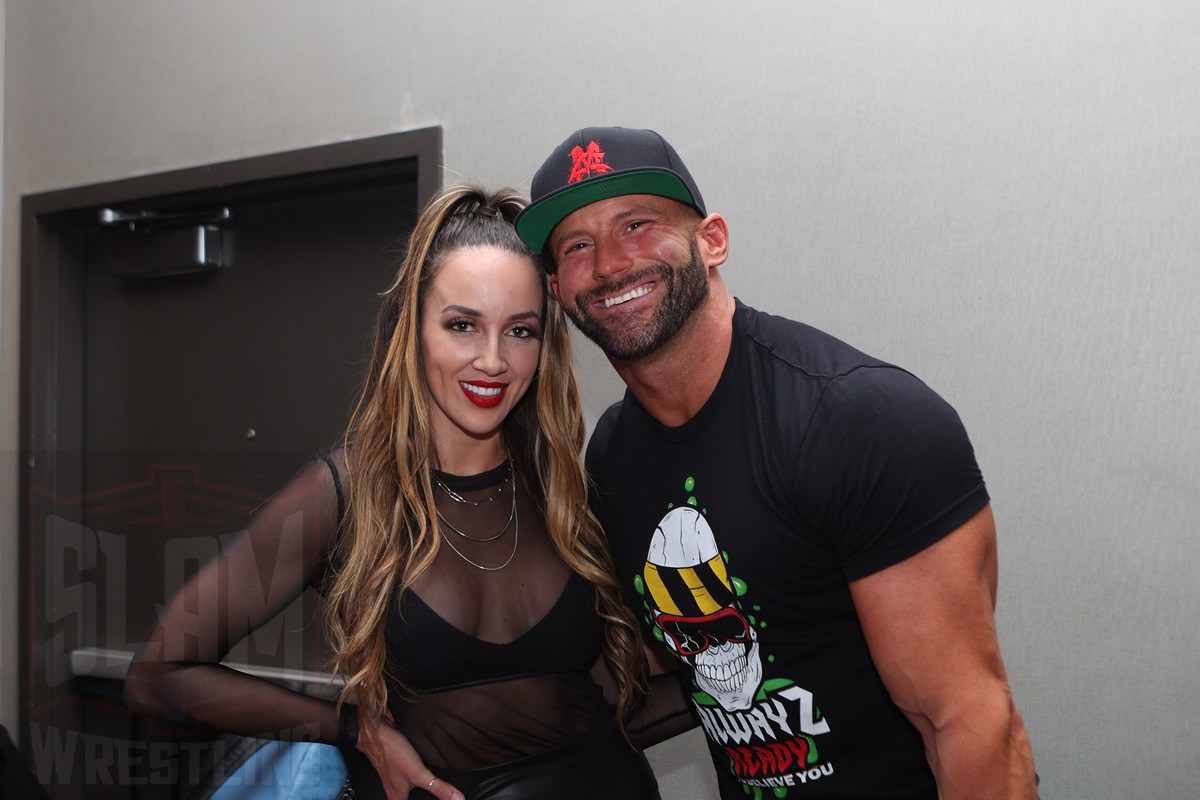 And life has been busy for Cardona, and his fiancée, Chelsea Green, who was released herself from WWE in April 2021. They are planning a wedding and running two separate brands from their home. He said it was his goal to make his decisions independent of hers.

“I try to stay completely separate from her when it comes to booking or stuff like that. I don’t want to know she’s doing, I don’t want to get booked together,” he said. “If we’re at a convention, I want to be on opposite sides of the room, because I just don’t want to mix that. We’re already together so much, we have to deal with the bills, the dogs, the wedding, I don’t want to deal about wrestling too. So it’s great that she’s in the business, and we both understand the crazy schedules. But at the same time, I don’t necessarily want to share all that stuff with her. There has to be a break and a separation.”

Since he had been released from WWE first, and she’d spent time outside of the WWE Universe already, they hit the ground running. “We have a post office in our kitchen. It’s a whole system in our kitchen, because, I sell all my own merch, Chelsea sells her own merch. I sell the merch for the podcast. So I literally have a printer label maker, the USPS comes to our house every day and picks it up. It’s a system,” Cardona explained, noting that it can be repetitive and stressful, but it is his job. “But someone’s got to do it, and I’d rather it be me than pay somebody to do it. Even though I do pay somebody to sell some of the major pod stuff, because we just sell too much.”

The Major Wrestling Figure Podcast is one of wrestling’s top podcasts, and celebrates collecting wrestling memorabilia, alongside his pal, Brian Myers (former WWE star Curt Hawkins). It follows after his YouTube show, Z! True Long Island, which was the populist wave that he rode to a push in WWE. The two shows are key to Cardona’s story, as the YouTube show was co-opted, and the podcast remains his.

“The internet’s a crazy thing, and that’s what kind of put me on the map over 10 years ago when I started that YouTube show. I wasn’t the first person to be on social media. I wasn’t the first person to even have a web show. But I think I was the first person to realize, ‘Okay, you can take your wrestling character and your real life persona and mix them and kind of blend them, and blur the lines of social media and that’s how people can relate to you,'” he mused. “If you’re not this top star on television, and don’t have a lot of TV time, how are you going to get them to care about you? Well, show them who you are, via the internet and I started my own YouTube show, Z! True Long Island Story. Eventually, it got picked up by WWE and it went to hell. But I knew, ‘Okay, if WWE doesn’t want to use me, I’m going to make them use me — or I’m going to get fired for being controversial and I’ll have so much buzz that I’ll go somewhere else.'”

After his WWE release (“the day I got released, I had a little hunch, a little birdie said it might be coming”), Cardona did the usual, and set up a ProWrestlingTees store immediately. But he still had the podcast “to fund our lives, to pay the bills.”

“Also luckily, we presented that idea of the podcast that WWE and they wanted nothing to do with it — thank God, that was a blessing in disguise. So we realized, ‘Okay, let’s just do it. Let’s do it as Matt and Brian, not Zack and Curt, and they can’t own it.’ So when we got released, they didn’t own it, we could still do it,” he said.

Getting released during the early days of the COVID pandemic meant that Cardona had plenty of interest in his talents for shows, but no one was running shows. “There were a couple running here and there but it wasn’t the safest and not a lot of crowds and social distancing, and the mask, and I just didn’t want my first time really in the indies to be in front of a sh***y house, so to speak, or sh***y shows. I wanted to wait and wait till it was ready.”

He thought the podcast would face a downswing too during the lockdowns. Wrong. “We were like, ‘Oh man, nobody’s going to be wanting to buy toys right now during this horrible time.’ But it was the opposite. Everyone was home, everyone wanted to relive their childhood. So much craziness and horrible things were going on in the world, they wanted to be reminded of some good, simpler, easier times, so they’d buy figures from when they were kids or figures they never had but they wished they had when they were kids. I was doing the exact same thing.”

The NWA can be considered something from the past too. Owner Billy Corgan is high on studio wrestling, with small audiences and big personalities. Cardona fits in.

Growing up on Long Island, New York, the 36-year-old Cardona “was a WWF guy” but “the NWA, even as a kid, I knew it was something special.” He sought out the magazines to learn more, and then the NWA became WCW, and later TNA controlled the NWA World title.

Cardona is a little cagey, on and off screen, about the NWA World title and champion Trevor Murdoch. He came out to Hard Times 2, according to him, since he was friends with challenger Mike Knox and Murdoch. The champ didn’t appreciate Cardona standing over his prone body in the ring, holding the NWA belt, as Hard Times 2 went off the air. 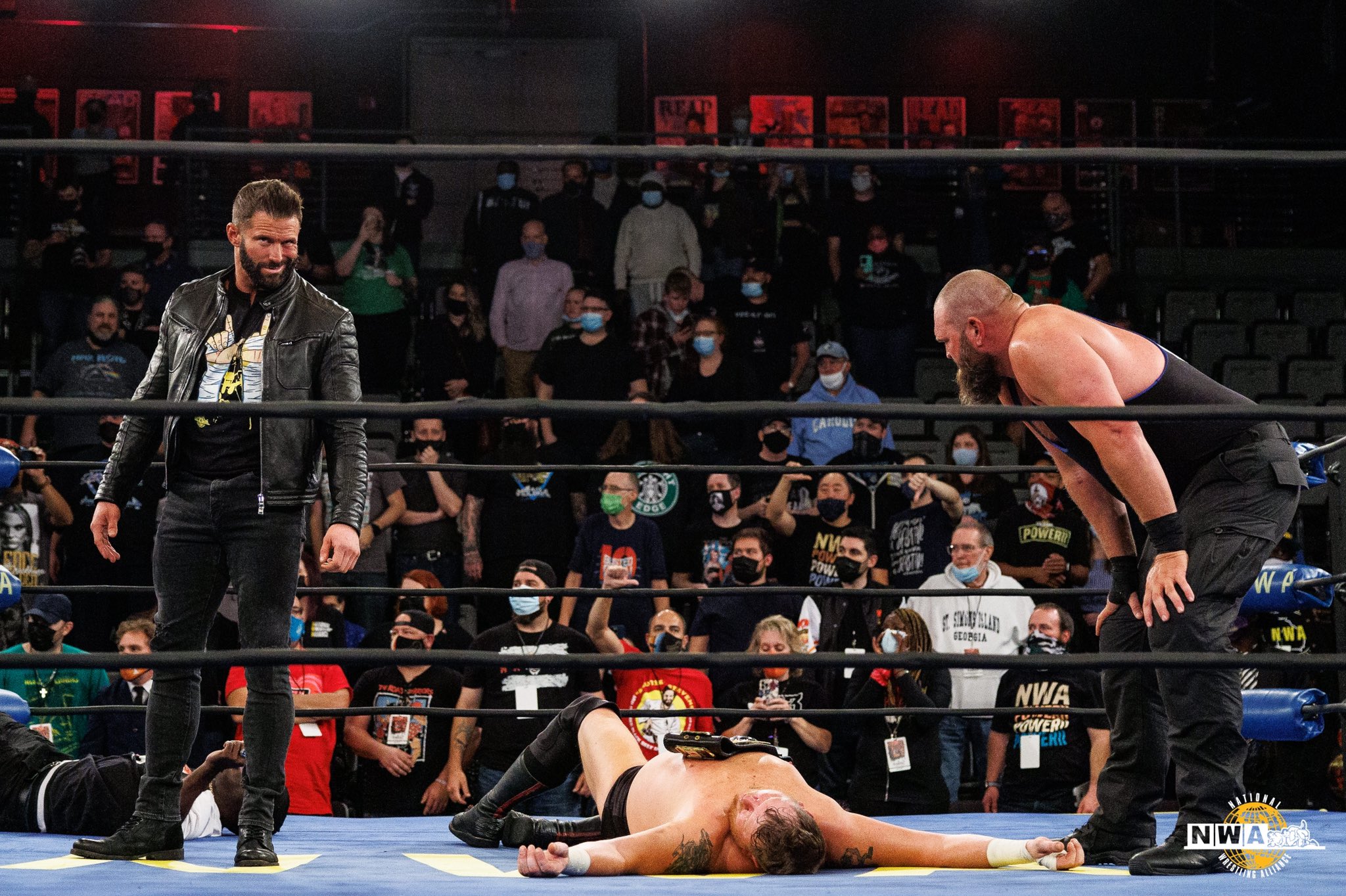 Maybe it will be the Impact World title first, as Cardona will be a part of a three-way bout, as he and W. Morrissey both try to wrest the title from Moose, at Hard To Kill, on January 8, 2022.

Or it could be some other surprise altogether.