Dark Side of the Ring spotlights Gage 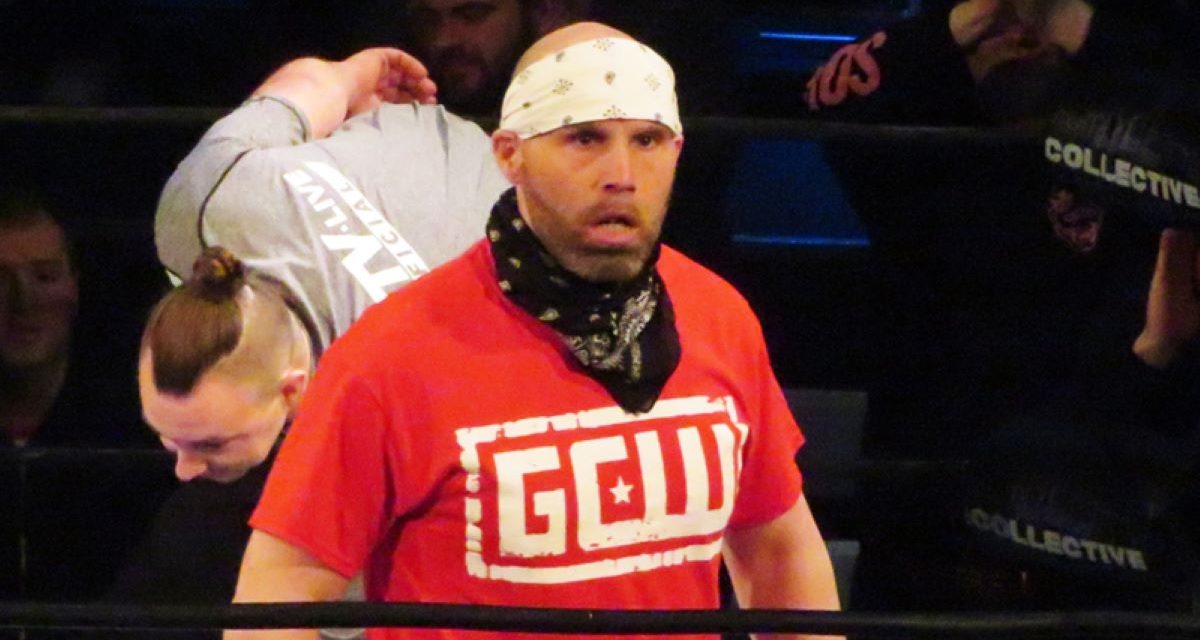 When you think of hardcore wrestling, or death matches, many names come to mind:  Cactus Jack, Terry Funk, Sabu, Atsushi Onita, Necro Butcher, and the list goes on.  But one name comes to mind that has achieved a cult-level of carnage and mayhem like the recent subject of Vice TV’s Dark Side of the Ring:  Nick Gage.  While those names are pretty big in their own right, and have accomplished accolades and awards over their time, this is where Nick Gage stands alone:

With this episode, the majority of the one hour is spent on his time wrestling for Combat Zone Wrestling (CZW) and the cult of death matches that lure many to witness, and how Gage feels this is real to him.  Contributors like Jon Moxley, David Arquette, and Brett Lauderdale (the owner of Game Changer Wrestling), add and corroborate most of his wild antics in the ring and out.  Moxley relays his experience with Gage in their first match when a pizza cutter gets involved, which only he can recount better than I can.

It even goes in the Tournament of Death, held in farmland where the participants get as bloody and as hardcore as possible.  Moxley hilariously calls it “Woodstock for death matches,” and it was in 2009 where Gage nearly lost his life against Thumbtack Jack in a lightbulb match.  A hip toss by Jack into the fluorescent bulbs cuts Gage under his armpit, and he hit an artery.  Equally jarring to viewers is seeing this old footage with the blood gushing, and Gage wanting to continue with the match, and ultimately getting airlifted to a hospital.  It is not a segment for the squeamish.  You have been warned.

We do see a different side of the New Jersey native, when he speaks affectionately of his mom, who suffered from breast cancer, to his early influence of him and his brother (Justice Pain) watching wrestling, and then getting into the Japanese death matches like with Cactus Jack and Terry Funk, along with the popularity stateside of ECW matches with The Sandman and Sabu.  We also get to see early home videos of Gage and Pain and their friends in backyard wrestling matches, and how that was the genesis of CZW. 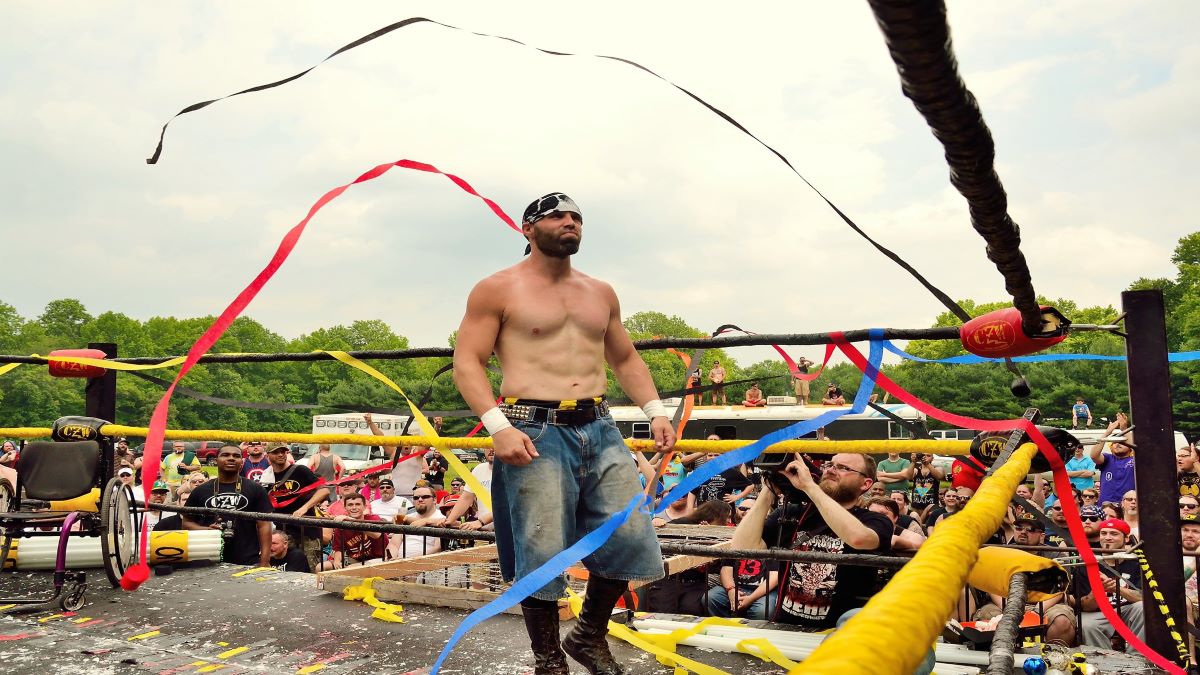 Naturally, they also talk about Gage’s spiraling out due to the drugs he was taking, because of the toll such matches can take on the body over time.  When Lauderdale is asked by the interviewer what was Gage doing to manage the pain, he deadpans, “He wasn’t exploring physical therapy or yoga poses.”  Even Gage gets into his use of OxyContin, his falling out with Justice Pain, becoming homeless, and his decision to rob a bank, and splurging in Atlantic City, NJ, before turning himself in.

After almost five years in prison, he gets paroled and gets a second chance with the new Game Changer Wrestling (GCW) promotion, due to his friendship with Lauderdale, and the fans that appreciated this modern day “King of Death Matches.”  Naturally, this leads to the infamous match of his career going up against David Arquette, but that subject was already explored in more detail in a previous article from Arquette’s documentary, You Cannot Kill David Arquette.  There’s not much else to say in this segment, except that Arquette quipped he did not know much about Nick Gage going to their match (which I find hard to believe), and Gage saying he was not going to take it easy because Arquette is an actor (which I truly believe).  Biggest takeaway was Arquette admitting that he bit off more than he could chew facing Gage, and after TMZ caught wind of this, it just furthers the cult of fans that are part of Gage’s “MDK Gang.” 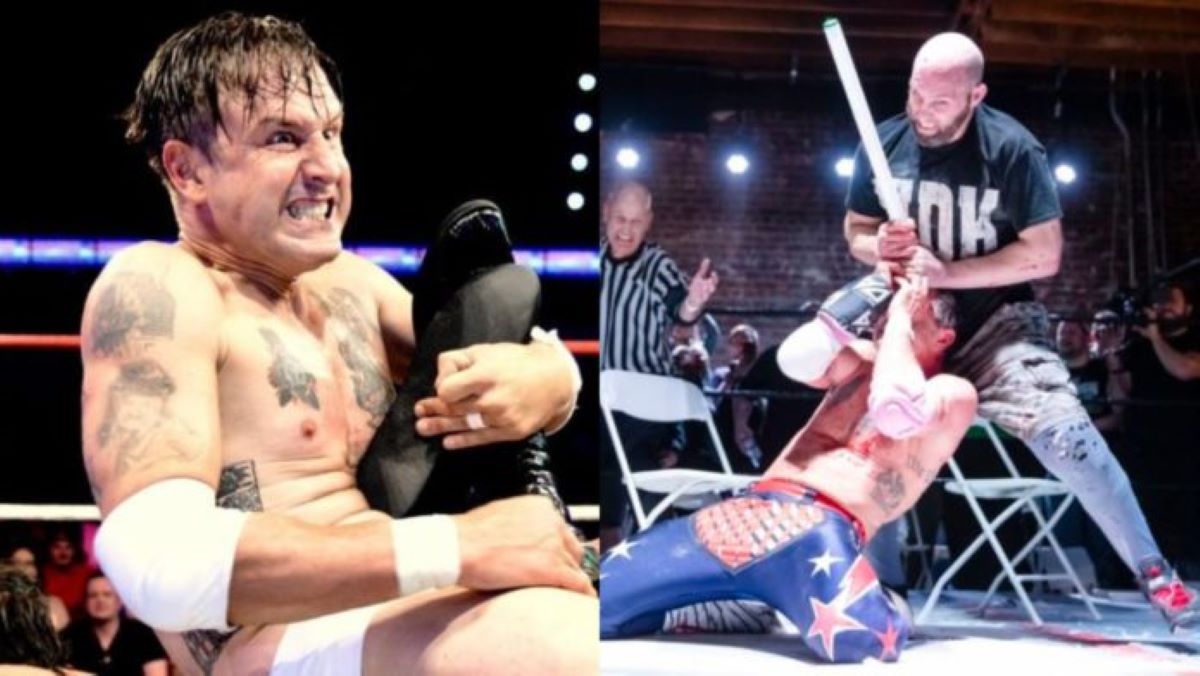 For those of you that watched Dark Side’s take on The Life and Crimes of New Jack, and thought New Jack’s tales into his past was intense, I’m here to tell you, that was nothing in comparison to the level of intensity Gage brings to the ring, and the willingness he will bring to give the bloodthirsty masses what they want.

At the heart of it all is a man that, by others’ admission, not only has a high threshold of pain, but has the ability to connect with the fans, which is a rarity in this mad business.  Also, hearing not just the amped “Nick F’n Gage,” but a man who grapples with the toll his life and his decisions has done to him and his family are stark, and he reflects on the losses in his life, from his mom succumbing to cancer, and his brother plunging from the Walt Whitman Bridge in Philadelphia, PA.

Usually, when “Dark Side” tackles a subject matter, the wrestler or event in question has happened, and the show ends with the viewer remembering the man/woman that person was, and the choices that led of that path, or the event was so awful or horrendous they can walk away and have a laugh.  Because that chapter is yet to be written, and with Gage still willing to forge on, it makes me wonder…will his “MDK Gang” be able to celebrate his accolades with Nick Gage down the road, or will this be another obituary page that just got prewritten?