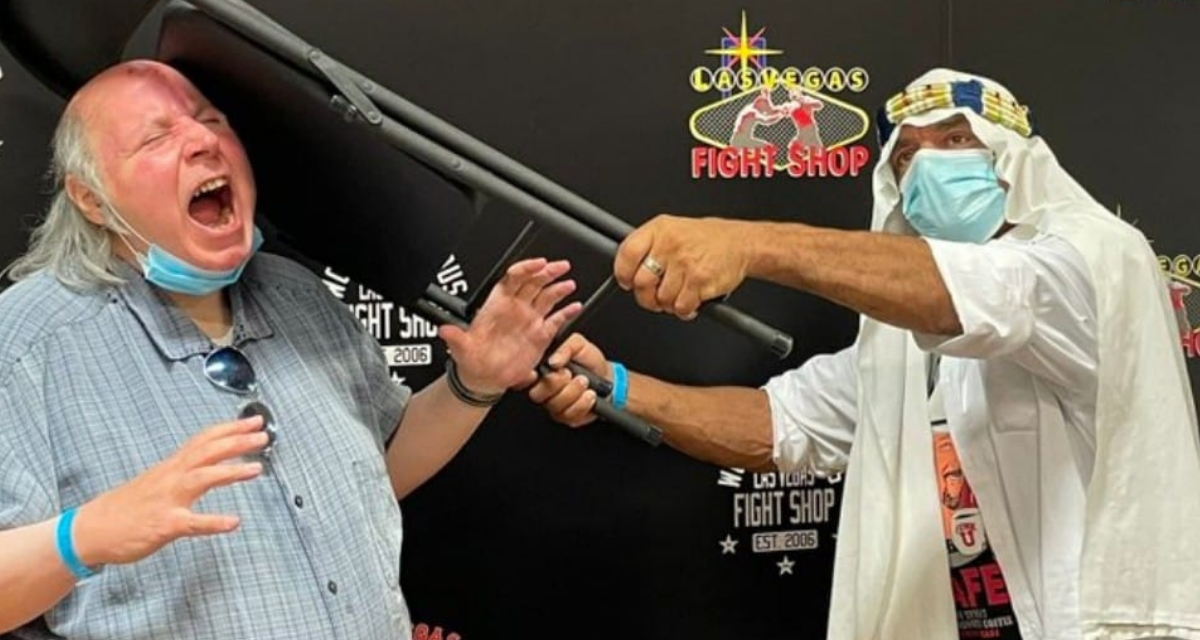 Tom Cusati, a long-time wrestling fan turned promoter and manager — as Royce Profit — was found dead on October 28, in his Las Vegas condo. Friends had been trying to get in touch with him for days, and finally the condo operator, urged on by “Sabu” Terry Brunk, who lived in the same complex, opened Cusati’s unit, and found him dead.

The sad ending: alone, naked, in the bathroom and dead for many days if not weeks, is in direct contrast to the way he kept people around him — even if he was paying for them to be there.

Tom Brandi was around him more than most, and summed it up succinctly:

Tom’s whole life was a rib and every story and memory was an inside joke. What could I possibly say that you can put in an obituary? Everything would come out negative but actually be me putting him over. All stories you had to be there to understand and appreciate. He was a gimmick 24/7. Just his OCD madness alone is a book in itself.

Cusati, who grew up in the Pelham, New York, area, and went to Westchester Community College, in Valhalla, New York, was a fan from the early days. Facebook photos show him meeting WWF wrestlers in the mid-1980s, and he met many other fans through Wrestling Chatterbox editor Georgiann Makropolous.

“I’ve probably known him since the first day I broke in the business, probably like 1986,” recalled promoter/manager/magazine editor Carmine DeSpirito. “I always remember him as a manager. I know he was also a big fan. He used to go to the Garden, sit front row, and he’d go to Allentown, go to tapings and sit front row. I’m not 100% sure who his hookup was. It could have very well been Professor Elliot [Maron].” 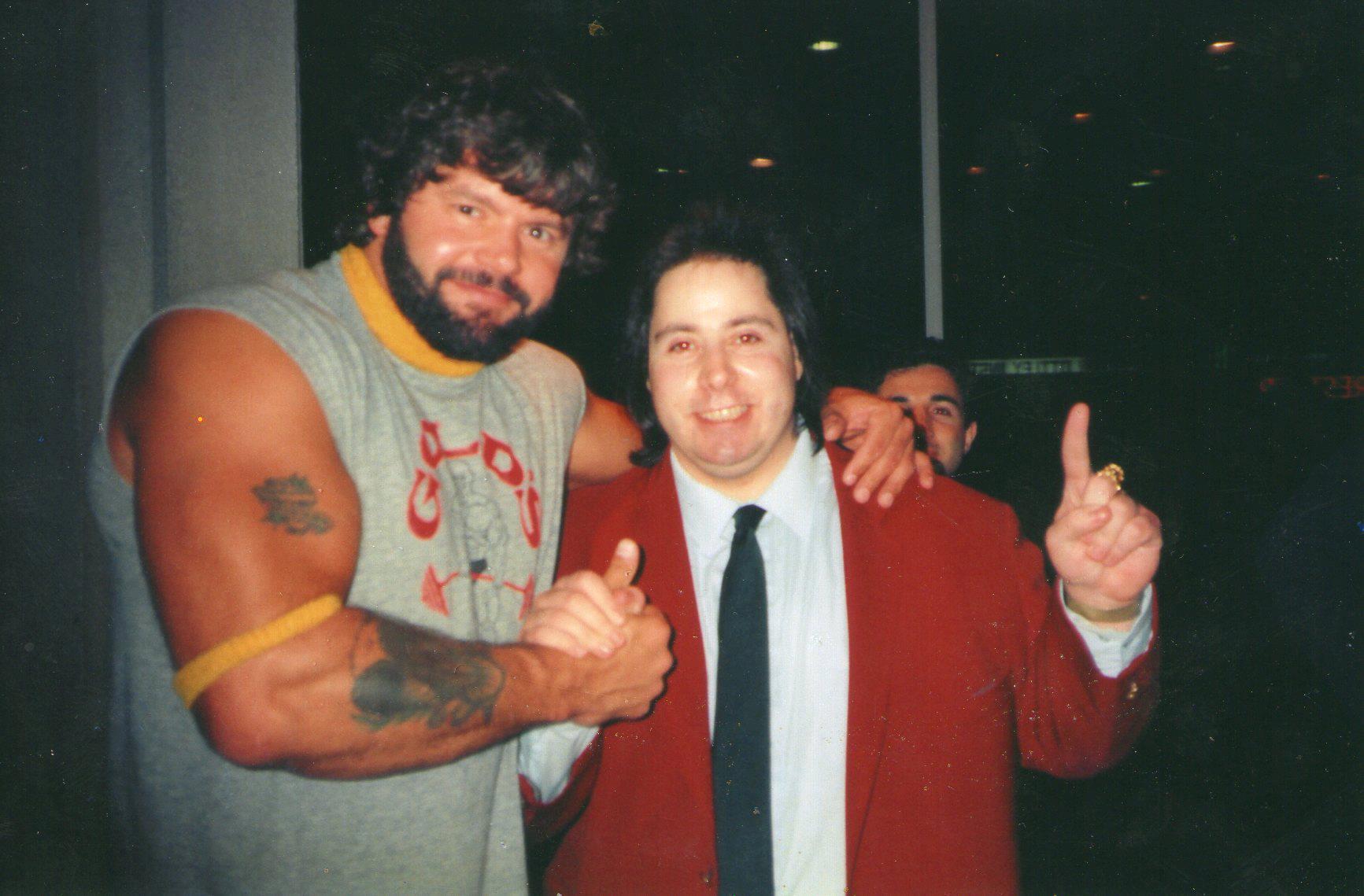 As the story goes, when Cusati’s mother passed away, he inherited some money and went into wrestling promoting. Often he was the so-called “money mark” behind the scenes for others who promoted shows.

“I don’t know how much money he blew through — rumors were a million or more over the years,” said North Carolina promoter and manager “Count Grog” Greg Mosorjak. “He would basically go into other promotions and bring his crew guys in and pay them himself and let the promoter keep all the door.”

Jimmy Cicero (Matt Bowman) was one of those in Cusati’s crew.

“He had an entourage that ended up traveling with him for years … Tom Brandi was a mainstay… others that were on his payroll were Steve Corino, Jason Knight, Axl Rotten, Buddy Landel, The Headbangers, Balls Mahoney, Big Slam, Danny Inferno, Dawn Marie, Simon Diamond, Devon Storm, Gangrel, Luna (Vachon), Iron Sheik, Scott Putski, Missy Hyatt, Joey Matthews (Mercury) and yours truly Jimmy Cicero,” he recalled. “We traveled the indy circuit where Tom integrated his ‘clique’ into shows all across the northeast from 1996-1999 … Tom bankrolled everything (was wealthy from inheritance).”

Mosorjak said that at one point, Cusati asked about taking over SCW, the promotion that Mosorjak ran at the time. “He wanted to come in and take over my promotion. He’s like, ‘I’ll pay everybody, you’ll make all the money.’ But I wasn’t willing to give up control of my promotion,” said Mosorjak. “But he had a lot of promoters do that all over Pennsylvania, New Jersey, New York, Virginia, Maryland. I think Dan McDevitt [wrestler Corporal Punishment] over at Maryland Championship Wrestling was a big recipient of his money over the years, helping build that promotion to what it was by bringing a lot of those names in when they were first starting out.”

The wrestlers on the actual card might be making $50 a night, but Cusati was paying his crew anywhere from $200 to $500 a night, and paying for their hotel rooms, food. “He took care of everything. You didn’t pay for anything if you were in his little group, his little clique,” said Mosorjak.

Not everyone was a fan of Cusati and his tactics. At one point, The Sheik and Abdullah Farouk Jr. took Cusati to court for monies they felt they were owed for a Pro America Championship Wrestling show they appeared on and that Cusati promoted.

Then there were the phantom cards, said DeSpirito. “There would even be shows that he would book and bring guys in, and there’s no show — there was nothing, the building was never called. There was no show set up at all. He’d take guys on cruises just to hang out with them.”

As a manager, Cusati was known as Royce C. Prophet or Royce Profit, or various spellings close to that. Here is a show from 2006 where he figures prominently: 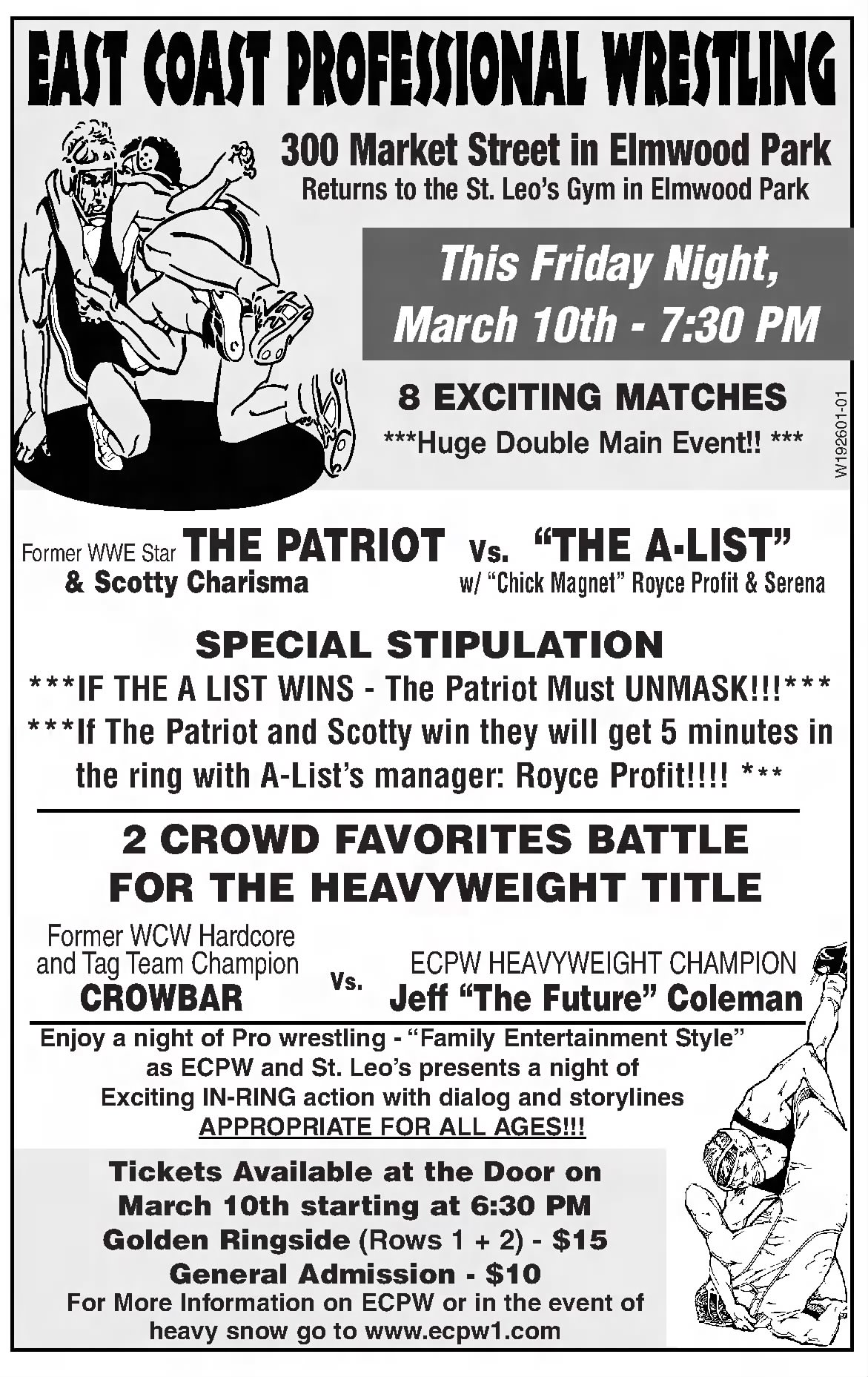 Fans liked to torment Profit, calling him “The Penguin” for his resemblance to Danny DeVito’s portrayal of Penguin in 1992’s Batman Returns.

“He was a pretty decent manager. He had good heat,” said DeSpirito. “He’d come out with a whistle and his golf club.” Since DeSpirito was a manager too — usually as Hubie Marx — Cusati tried to avoid being on the same shows in the Northeast, as he liked being the only manager on the show. One time, DeSpirito recalled getting to “co-manage” Cowboy Bob Orton Jr. with Cusati as Royce Profit on a Dennis Coralluzzo-promoted show. “I remember Cusati said to Bob in the locker room, ‘We’re going to do a spot in opposite corners. And then we could do a Do-si-do.’ And Bob says, ‘I don’t do no Do-si-dos.’ … That was a memory from over 30 years ago.”

Cusati was known all up and down the Northeast, and managed as far west as Pittsburgh.

“Tom Cusati was one of the great characters in the background of the east coast indie scene. There’s many fond stories of Tom that came flooding back when I heard he had passed,” said The Blue Meanie (Brian Heffron). “A lot of good laughs followed by the sadness that another person from my history is gone. Tom loved wrestling and was loyal to the business. Most importantly he was loyal to the boys and the boys knew it. They’d rib Tom and he’d love it because it was a sign of acceptance. Whether it was Tom as heel manager Royce Profit or as a promoter/representative, Tom would actively help guys get booked and most importantly PAID. The business was better for having Tom involved.”

Stephanie Bellars shot to fame in WCW as Gorgeous George, valet to Randy Savage. When her run there ended, she too worked up and down the east coast of the US, and got to know Cusati. “I started doing indies every weekend. I didn’t stop for the last 20 years, I just now slowed down,” Bellars said. “And he was always on the shows, and he was always so good to me, and always very, very patient.” Bellars said that Cusati would listen but never pass judgment.

Cusati and Bellars stayed friends, and it was Cusati that picked up Bellars and her boyfriend when they flew into Las Vegas for September’s Cauliflower Alley Club (CAC) reunion — after he convinced her to come out to the annual event.

She can only wonder what happened. “I knew when we left there that he was dead. I knew it in my mind, in my heart, because he would have called me right away and said to me, ‘Hey, George, did you guys make it home?’ No call, no call. I kept calling his phone. He doesn’t do that to me. That’s one person who calls me right back every time.”

It was Bellars that encouraged Sabu to go check on Cusati, since they lived in the same building. According to her, management lied to Sabu and said they’d seen Cusati only the other day. On October 28, when Sabu finally convinced management to do a wellness check, the smell coming out of the apartment was horrible. Talking to Sabu on the phone, Bellars could hear the ambulance coming to deal with the body of her friend.

Though no cause of death is known, Bellars suspects it was COVID-19-related, as many of the people that she hung out with at this year’s CAC reunion got some version of the virus, including herself. (Two people who were at CAC in September have died: Reggie Parks and “The Yetty” Bryan DeBord.)

The death in the bathroom fits the narrative, she said.

“Tom was known for taking extremely, extremely long showers, because he’s a germaphobe,” she said. “That’s why his skin is always red, because he rubs it raw. So just keep washing and washing and he puts on scalding hot water until his skin burns and he thinks that cleans him. So he’s been doing this for years.”

DeSpirito had heard about that quirk too. “He’d shower for three hours and scrub himself. Yeah, I think that’s the reason why in a lot of photos of him, he has red swatches on him,” said DeSpirito. “I thought it was psoriasis or something, I found out later it wasn’t.”

There were other quirks too, like using a whole tube of toothpaste to brush his teeth, the evidence left in dressing rooms up and down the Northeast.

At some point around 15 years ago, Cusati left New Rochelle, NY, and moved to Las Vegas, and lessened his involvement with professional wrestling — other than events in Vegas, like the annual CAC banquet. 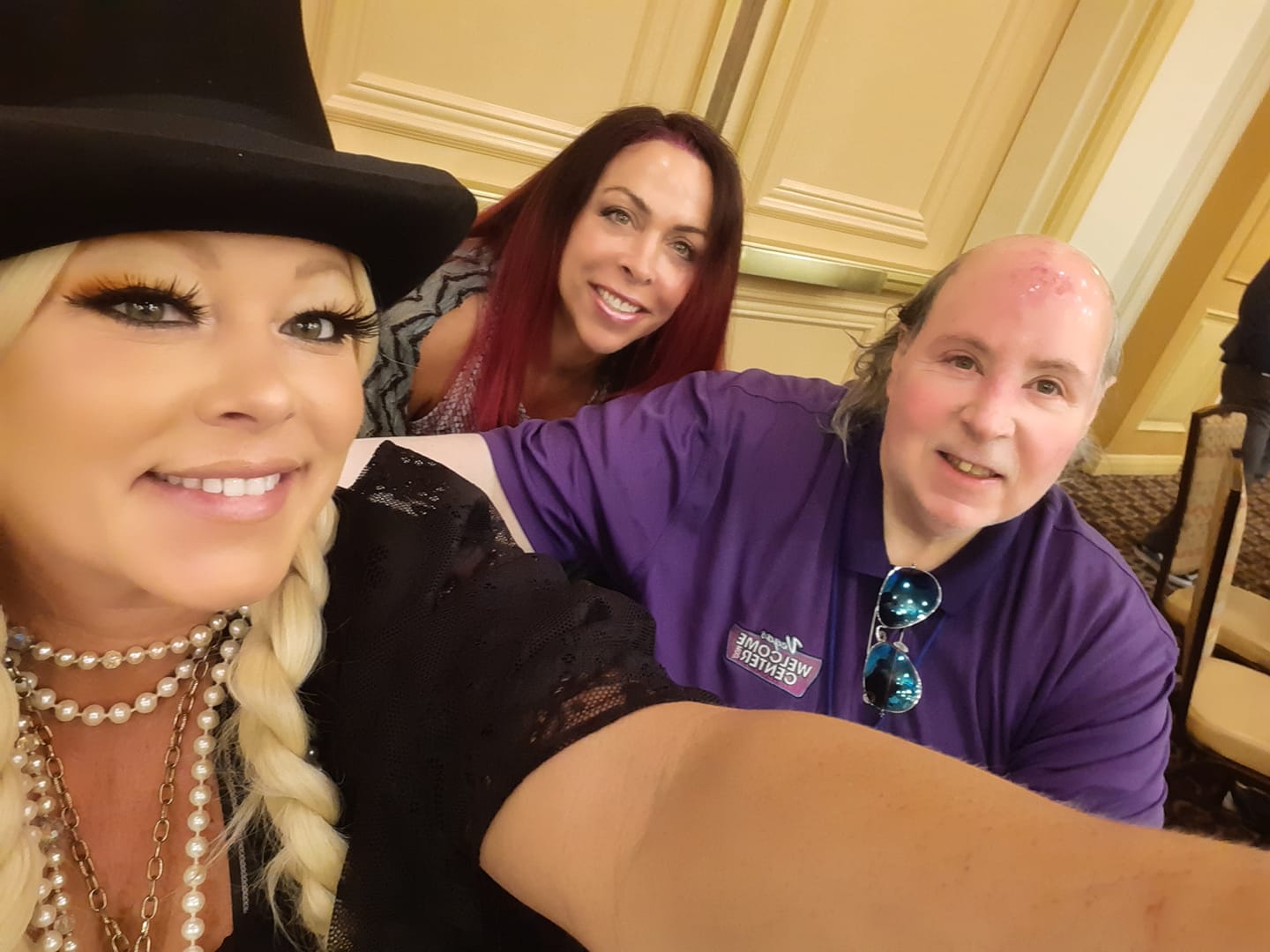 For the last number of years, there have been wrestling shows at the Gold Coast Hotel & Casino in Vegas as a part of the CAC (though not affiliated with the CAC), and Cusati would manage. Bobby Sharp, of Alberta, was a babyface on one of those Vegas shows. “He played a coach/manager and could get some heat, especially blowing his damn whistle,” recalled Sharpe. “It would drive me crazy. I remember being in a match and he screwed with me, blowing it every time I threw a punch. I ended up just stopping punching and he got such a kick out that.”

At the most recent CAC, Cusati was telling people he had been hired by WWE, and had been working with NXT talent on promos, and that he had recently run a four-hour seminar on the day of a NXT TV taping. His Facebook profile listed his profession as “Works at WWE Corporate Headquarters.”

It was not true.

No one contacted by SlamWrestling.net knew much about Cusati on a personal basis. He is believed to have been 58 years old at the time of his death. No one knew about real day jobs or where any income came from, aside from the original inheritance or trust fund, or details about any family.

In a Twitter post, wrestler Danny DeManto, based in New Jersey, summed up Tom Cusati: “A carny after my own heart. Never a dull moment around this legend. It was always a pleasure and honor to work with you. The stories and memories will last forever!”

TOP PHOTO: Tom Cusati gets a playful chairshot from Sabu when Cusati came to see Sabu at an appearance at the Las Vegas Fight Shop. Twitter photo

EDITOR’S NOTE: The clipping in this story was erroneously listed as 1996 when it was 2006.