Up until September 8th, chances are that unless you were an indy wrestling aficionado in Alberta, that you hadn’t heard of Bobby Sharp. With his ascension to CNWA National champion, a new title designed to be defended in promotions across Canada, he hopes that all changes.

Sharp won the brand-spanking new belt during a tournament in Red Deer, Alberta, organized by Vance Nevada. It was Nevada who struggled mightily to get the various promotions working together.

After coming out on top, beating A.J. Sanchez, Mentallo and K.C. Andrews in succession, Sharp had even greater respect for Nevada for the attempt to make it happen, due to many cancellations on the part of indy wrestlers.

“The original plan that was shot to me for the eight guys, or seven other guys, was completely different than what we ended up with Saturday,” Sharp told SLAM! Wrestling, revealing his versatility as a wrestler who can put a match together on the fly. “When you hear about plans in wrestling, you have to just go with it, and not expect it to go exactly how everybody expected it to go in the first place.”

“We kind of had an idea who we were wrestling in the tournament, but at the same time, I had no idea, because so many guys had been canceling,” Sharp told SLAM! Wrestling. “The original plan that was shot to me for the eight guys, or seven other guys, was completely different than what we ended up with Saturday. So that was, not hard to deal with, but when you hear about plans in wrestling, you have to just go with it, and not expect it to go exactly how everybody expected it to go in the first place.”

There were representatives from promotions in Manitoba, Saskatchewan, Alberta and British Columbia. “I’ve worked for all these promoters individually, and they all have different views on what a champion should be or what a wrestler should be, or what’s marketable, what they can draw with in Canada,” said Sharp.

A big part of the challenge is all the travel in the Canadian west, where in Alberta, it might be three hours to another big city, but in Manitoba and Saskatchewan, and traveling anytime over the Rockies into British Columbia, the hours of the trip take two hands and more to count.

“See, I love to travel, but that’s still the biggest obstacle, because it’s so far as far as hours,” Sharp said, detailing a trip from his home outside Edmonton to Moose Jaw, Saskatchewan, which took eight hours, and then another eight to Winnipeg — and then home again, roughly 16 hours. “That’s so common, and it sounds like a messed up thing, but it happens all the time that you don’t even think twice about it.”

Going south to the United States to work indy dates is an option, just a risky one, he said. “You can go to the States, but you’re always risking yourself because you’re not really allowed to go there to work full-time without a couple of hoops to jump through.” 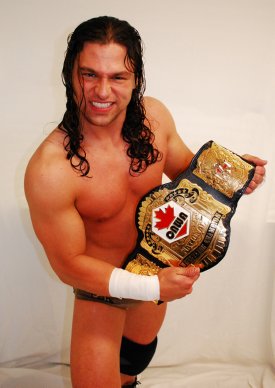 It seems that Nevada’s vision is already paying off: The new champ already has a booking in Kelowna, B.C., for a promotion he has not worked for before.

“In the last three days, a lot of people have been emailing me and asking if I’d like to come out and bring the title,” he said.

Sharp, a 6-foot (when stretching), 200-pound grappler, sees himself as a fairly traditional wrestler.

“I’ve always wanted to be one of those wrestlers that people looked at and said, ‘He was a workhorse and really good at what he did. He was a really good wrestler.’ That might sound like, ‘No, no, he never accomplished anything.’ What I would like to accomplish would be definitely going overseas. I definitely want to at least make a living at this, that’s the biggest thing. I mean, you measure success in being able to say, ‘Hey, I wrestled, doing something I love, and I’ve been able to pay all my bills with it, and I’ve been able to support myself with it.'”

He considers himself a technical wrestler, “I really like wrestling and having my stuff mean something, and really telling a story with certain moves, certain ways I’m going, and certain things that happen in a match. That’s always been real good wrestling to me,” he said. “It’s not strong-style and it’s not a hardcore style and it’s not a really high-flying style. I can catch guys and I can move really fast, and those are maybe sometimes my downfalls.”

Like any indy worker, Sharp dreams of WWE or TNA, but also lists Japan, Puerto Rico and England as destinations he wants to work so he can expand his styles.

Sharp’s intention to work overseas is greatly influenced by a couple of men who were mentors and training for him during his 10-year wrestling career: Veteran world traveler Eddie Watts and Japanese stand-out Phil Lafon, who made up the famed Can-Am Connection with partner Doug Furnas.

Through a friend, Sharp started bouncing around a wrestling ring in Edmonton when he was only 12 years old. “That was insane, getting a chance to get in the ring. It ended up, we paid $50 and hung out at this training centre, me and a couple other buddies,” he recalled. They got to know all the indy guys over the next year. “To us, this is just a great experience. We think these guys are the greatest wrestlers ever.”

When Sean Dunster, who wrestles as Massive Damage, launched his Monster Pro Wrestling in Edmonton around 2002, he saw that there was an opportunity to promote an under-18 division with these youngsters, modeled on the Calgary-based Mat Rats.

“We were kind of a liability, guys advertised as under-18 guys wrestling on a show. At the time, I was 14, so I guess it was a cool opportunity to wrestle in front of 300 people at 14 years old,” said Sharp, recalling his debut in February 2003. “It’s cool to note that in that first match we didn’t have a finish and Vance Nevada and Steve Rivers, who ended up being two of the most influential guys as far as my wrestling goes, came out and interrupted, and cut a promo saying that none of us belonged in the ring and that we should hang up our boots and give it up — which was planned, I guess, maybe it was a rib. I don’t even want to look back at the match. I watched it six years ago, four years ago, and I almost cried, it was just so bad.”

“I’ve known Bobby for ten years now. He started training at the age of 14 with MPW. He went from a young, funny looking, awkward kid, to a young lion in the matter of a couple years,” said Sean Dunster.

It was in 2003 that he found someone he really wanted to emulate, as Watts had stopped in Edmonton in between his tours of Mexico and Japan, and worked out with the Monster Pro guys. “He ended up training with Massive every day. Eddie’s a workhorse when he goes into the ring. That’s where I got that whole, ‘That’s how I want to be.’ He would be there every single day and he’d be limping or a little hurting, have a really hard workout at the gym. But once he got into the ring, the light’s green, he’d f—— go, go, go. That was the first time I had experienced that kind of training. That’s why I list him, because I only really trained with him two months.”

Lafon is another old-school wrestler who works out with the Edmonton crew here and there, just keeping his body fresh while pursuing other work.

“Every time he comes back for training, he still holds training classes that I go to, just seeing how talented that guy is still is actually an inspiration, because he’s over 50 and he can still go better than probably everybody in our company,” said Sharp.

According to Steve Rivers, Sharp developed an incredible work ethic early on and always showed an eagerness to learn.

Bobby shows a great passion for the wrestling business and has been a great student as a result,” said Rivers. “He respects the buisness and the wrestlers that came before him. Not everybody who becomes a wrestler these days have any of these qualities. Bobby would listen and watch us very carefully at at his young age as a teenager and still does it today now as a young man with several years experience.”

Sharp has attended camps run by Harley Race, Johnny Devine, Ricky Steamboat, and Lance Storm. From each he learned something, and mixed it in with his own ideas.

Unlike other technical wrestlers, Sharp also has a unique pre-match workout that sets him apart from many wrestlers: he meditates before his matches, saying that it helps him “find his inner strength.”

Dunster is proud of how far Sharp has come. “His work ethic is the thing that impresses me most about Bobby,” Dunster said. “Over the last year, I have watched Bobby take it to a new level, turning it up a notch, which has pushed him over the edge, and made him a legit worker at any level. Whether it’s working at the top of the card with a top draw, or working with a newer guy, and guiding him, Bobby has come into his own. In my opinion, the wrestling world is his for the taking.”

At the moment, he is trying to make a go of it full-time as a wrestler, and generally can get 10 bookings a month. Sharp has always had “real” jobs that were friendly to his passion.

“I’ve had jobs that have benefited pro wrestling or benefited myself in the sense that I can better myself for pro wrestling,” he said. There were the years working in a gym, and the current work here and there doing security or bouncing. Then there was the time when he was employed at an auto mechanic shop, “which is funny in the sense that we spend a lot of time in cars going on the road.”